So you want to fly to Hawaii!

And you want to go to see some stunning views of Hawaii as a part of your time in Hawaii!

Which are the best things to do in Hawaii that will give you some of those amazing Hawaii views?!

Below will show you the very best things to do in the Hawaiian islands, on different islands.

There are affiliate links on this page that will take you to a partner website. You can read reviews for the best Hawaii tours at getyourguide.

What is Hawaii known for?

Hawaii is best known for epic views of the ocean and mountains… and volcanoes!

👆 Hawaii is known for volcanoes, ocean views, and hikes with epic views! One of the best Hawaii hikes that come with amazing views is the Hoapili Trail which is also a hike across Hawaii lava fields!

👆 Hawaii is known for ocean views! One of the best coastal walks in Hawaii that comes with amazing views is in Wailea!

But there is also so much to do in Hawaii that’s not the beach!

The most famous things to do in Hawaii that’s not the beach include the Hawaii Volcanoes National Park, the Road to Hana, and the Napali Coast.

The top things to do in Hawaii are located on the islands of Oahu, Maui, Kauai, and the Big Island. These are the main tourist islands of Hawaii. 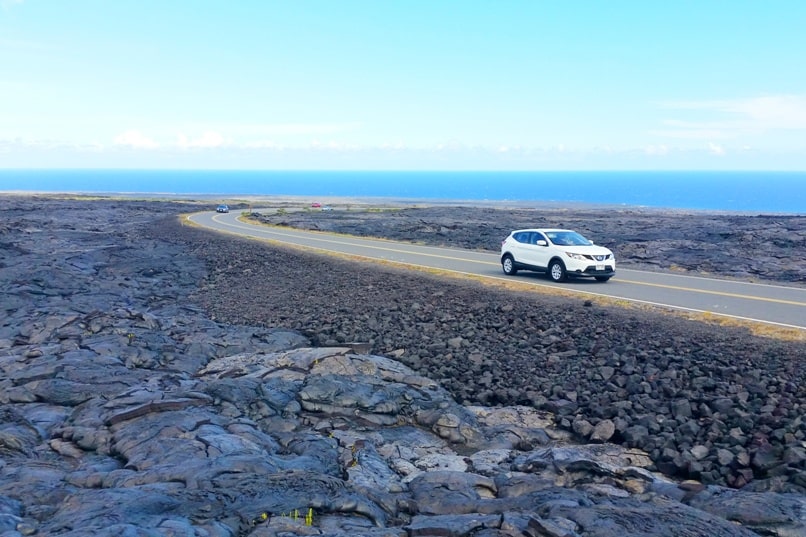 👆 One of best things to do in Hawaii is Hawaii Volcanoes National Park where you can drive the Chain of Craters Road to see vast lava fields produced by volcanoes. And if you’re lucky, you might even see active lava flows!

👆 One of best things to do in Hawaii is the Road to Hana where you can see some of the best waterfalls in Hawaii.

The most famous scenic drive in Hawaii is the Road to Hana, which is a drive along the Hana Highway.

Although the town of Hana is the “destination,” this famous Hawaii drive is more so about the Road to Hana stops to make along the way!

👆 One of best things to do in Hawaii is to hike through Hawaii’s famous bamboo forest which starts just off the Hana Highway.

You can also eat some of Hawaii’s most well-known foods!

You can eat famous banana bread and famous huli huli chicken that was approved by Gordon Ramsay.

Gordon Ramsay had a whole episode dedicated to the Hana coast!

Most people will do this scenic drive in Hawaii as a day trip, but if you want to be different and experience quiet Hana after the crowds are gone (and get a chance to do more things on the Road to Hana!), then you can stay overnight at the Hyatt Hana or a Hawaii state park camping cabin! 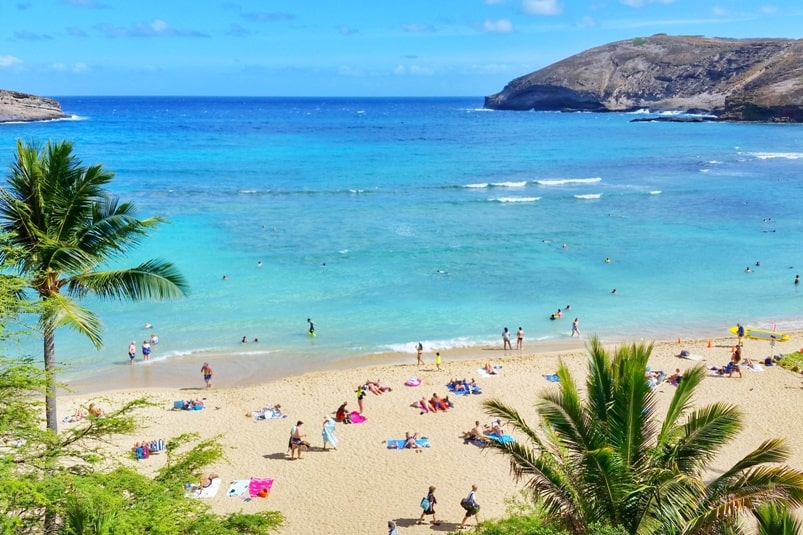 👆 One of best things to do in Hawaii is to go snorkeling! Hanauma Bay is one of the most famous snorkeling spots in Hawaii.

Hawaii is one of the best snorkeling destinations in the United States!

Among the most famous snorkeling spots in Hawaii is Hanauma Bay on the island of Oahu.

The best island in Hawaii for snorkeling is generally said to be Maui, but you really can go snorkeling on any of the Hawaiian islands for a chance to swim with colorful fish and maybe even turtles!

You also have a chance to see turtles on all of the Hawaiian islands without stepping foot in the water too! I have seen sea turtles from land on Oahu, Maui, the Big Island, and Kauai!

You also have a chance to see Hawaiian monk seals in Hawaii. I have seen seals on Maui and Lanai!

Whether it’s turtles, seals, or fish, there are Hawaii beaches that one or more is known to more frequently be spotted. (So be sure to look up specific beaches when you go to Hawaii!)

Also, it is a big deal in Hawaii to respect the wildlife! (Marine life…)

In this case, respecting the honu (turtle) and seals mean to keep your distance from them! Only LOOK, don’t touch!

Also for more marine life watching… You can see whales in Hawaii!

Generally speaking whale watching season in Hawaii is in the winter.

The best island in Hawaii for whale watching is Maui, but you do have a chance to see whales from other islands too!

One of the most famous coastlines of Hawaii is the Napali Coast on the island of Hawaii. 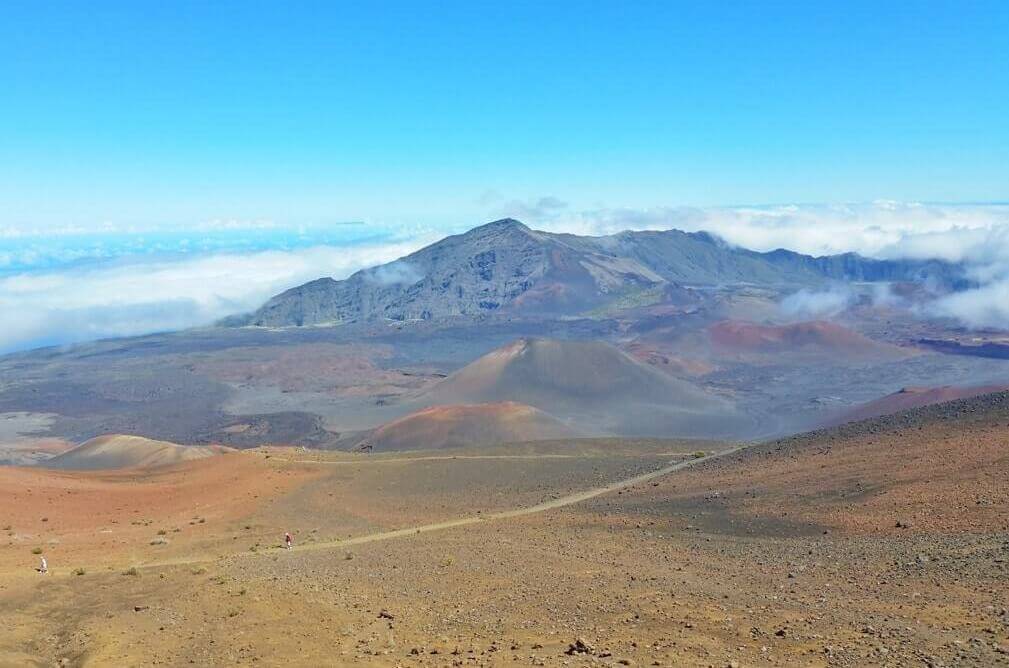 👆 One of best things to do in Hawaii is Haleakala National Park where you can drive to the Haleakala volcano summit and then go hiking near Haleakala summit. 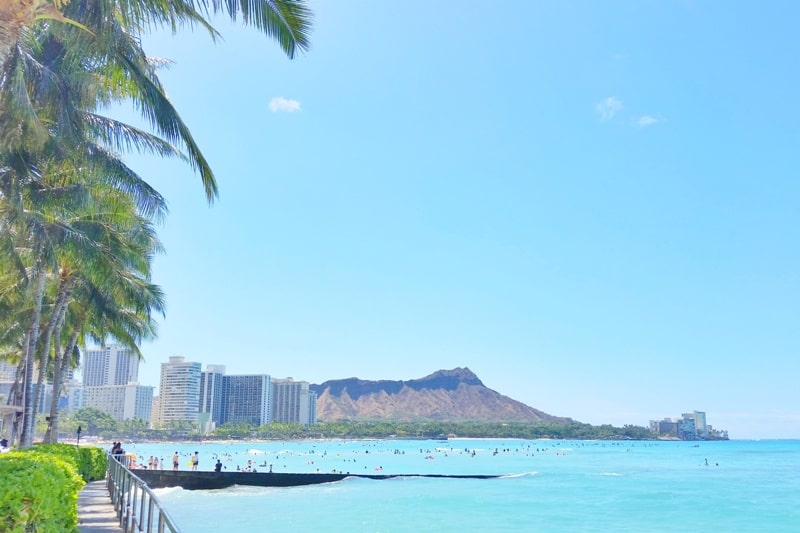 👆 One of best things to do in Hawaii is Diamond Head. You can see Diamond Head from the most famous beach in Hawaii, Waikiki Beach.

Diamond Head is the famous icon of Hawaii for the island of Oahu.

There are several ways to see Diamond Head, starting with your flight to Hawaii if you are sitting on the land side of the plane when flying into Honolulu Airport!

It’s possible to go swimming with views of Diamond Head from many parts of Waikiki Beach, which is the famous beach in Hawaii on Oahu. This is the main tourist hub of Oahu.

And finally, it is also possible to hike to the top of Diamond Head!

The Diamond Head hike is one of the most popular hikes in Hawaii. 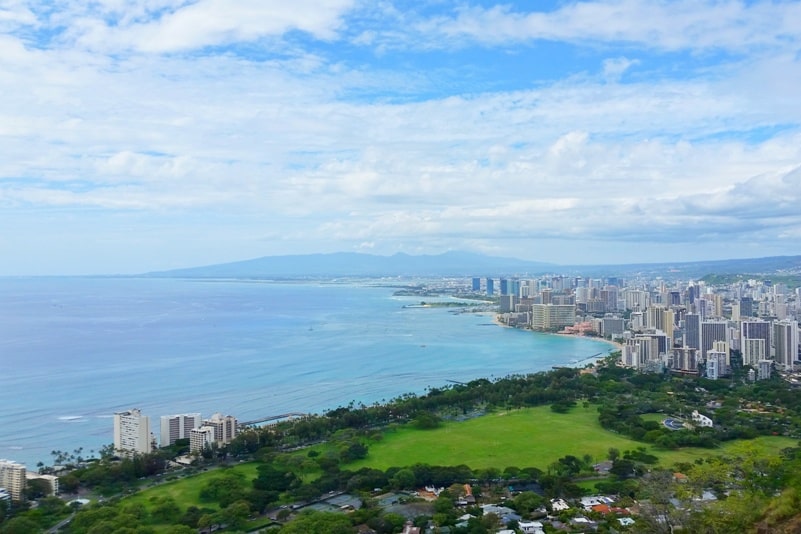 👆 One of best things to do in Hawaii is the Diamond Head hike to see Hawaii’s iconic city skyline.

Waimea Canyon is said to be the Grand Canyon of Hawaii.

You can get epic views of Waimea Canyon from above by going for a Hawaii helicopter ride or by hiking in a Hawaii state park! 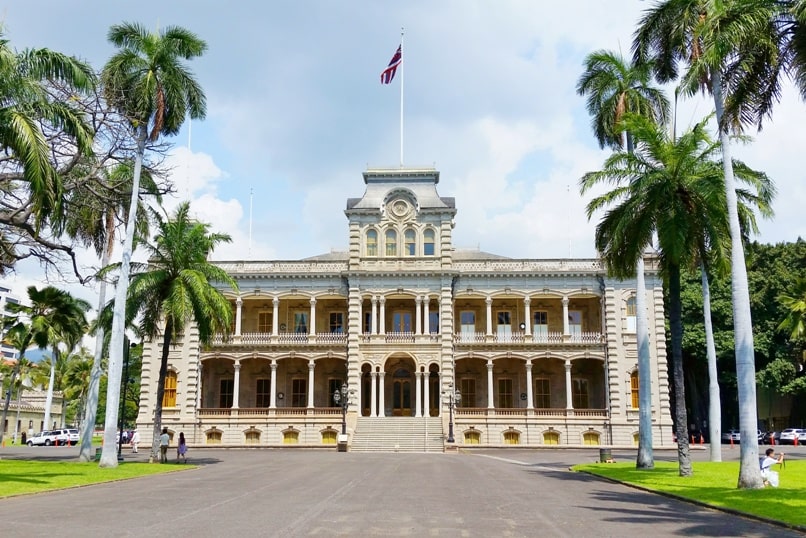 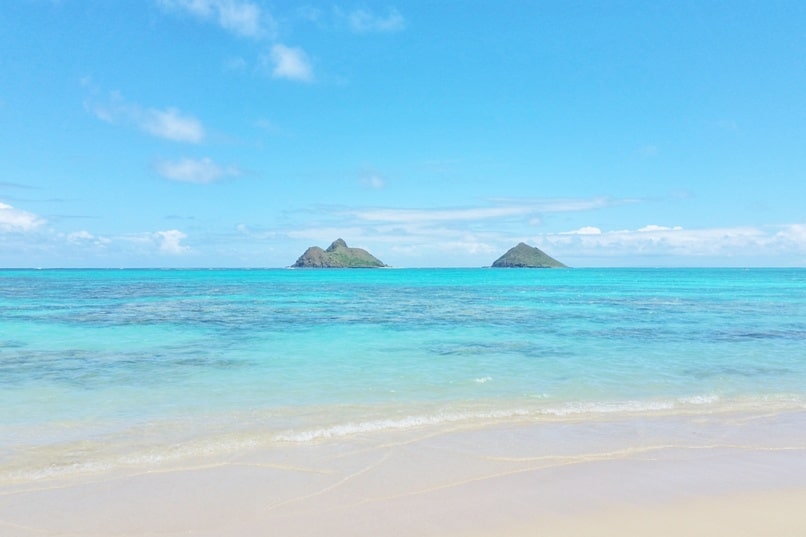 👆 One of best things to do in Hawaii is Lanikai Beach. This is one of the most iconic beaches in Hawaii.

Hawaii is one of the best beach destinations in the United States!

Among the most famous beaches in Hawaii is Lanikai Beach on the island of Oahu.

Another one of the most famous beaches in Hawaii is also on Oahu, and that is Waikiki Beach.

The best islands in Hawaii for beaches are generally said to be Maui and Oahu, but you really can find amazing beaches on any of the Hawaiian islands! 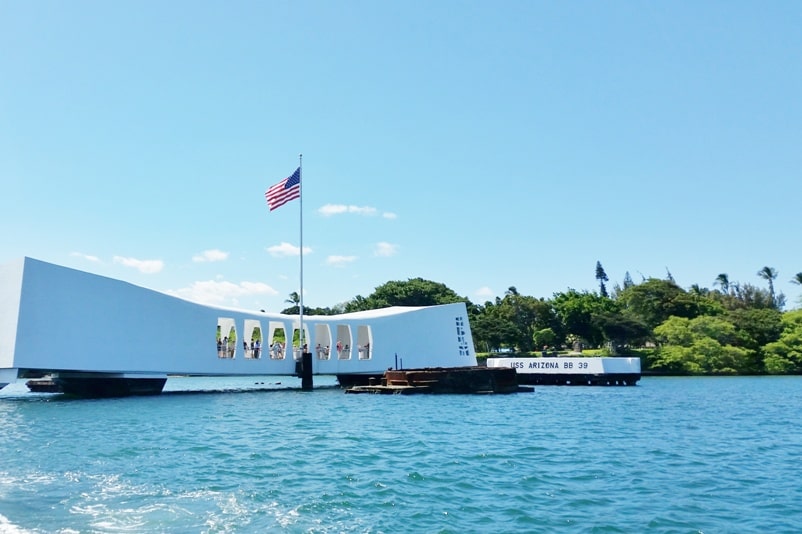 👆 One of best things to do in Hawaii is Pearl Harbor. Pearl Harbor is the famous national memorial in Hawaii. You can get a better understanding of the United States involvement in World War II, along with an appreciation of the sacrifices made by Americans during the war. 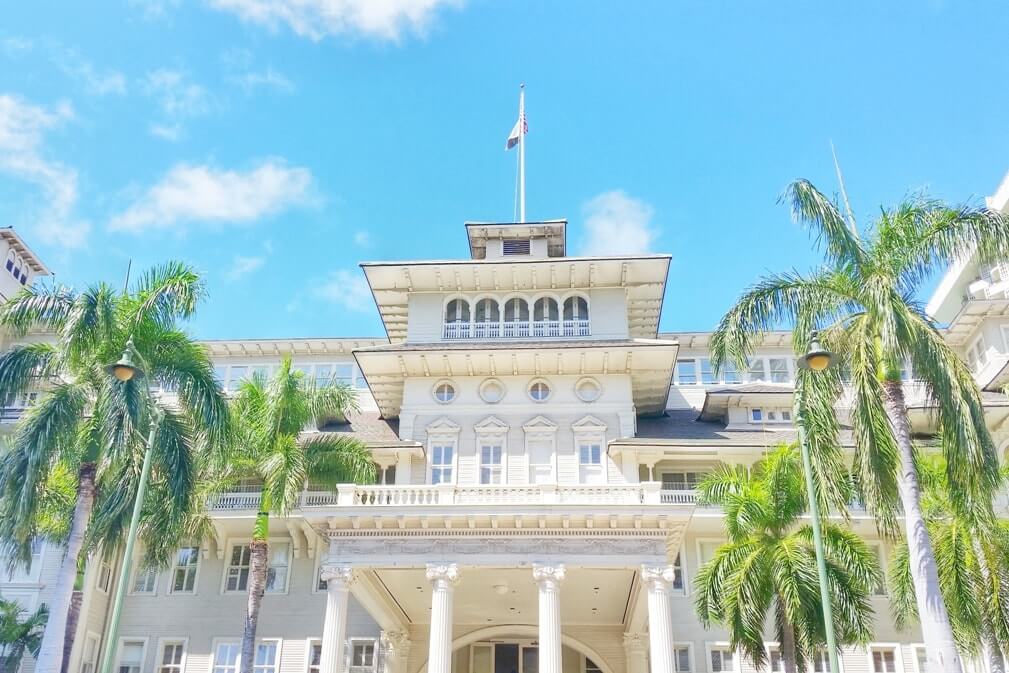 👆 The Moana Surfrider is a famous historic hotel in Hawaii. You can join Hawaiian cultural activities like hula lessons and ribbon lei making. Check to see if there will be a historic tour of the hotel while you are in Hawaii.

Hawaii is also known for its beachfront hotels and oceanfront hotels!

The Disney Aulani, Turtle Bay Resort, and Moana Surfrider Westin are among the best hotels in Hawaii on the island of Oahu.

The Four Seasons Hualalai and Mauna Lani Auberge are among the best hotels in Hawaii on the Big Island.

The Four Seasons Lanai and Sensei Lanai are the best hotels in Hawaii on the island of Lanai. Lanai is the luxury island of Hawaii that fewer tourists visit.

The Grand Hyatt Kauai and Koloa Landing are among the best hotels in Hawaii on the island of Kauai.

The Four Seasons Maui and Ritz Carlton Kapalua are among the best hotels in Hawaii on the island of Maui.

If you are traveling alone to Hawaii, then there are also hostels in Hawaii that you can stay at!

Island hopping in Hawaii?! One island or 2?!

The often-given advice when traveling to Hawaii for the first time is to just stick with one island if you have a week or less.

This is mostly because island hopping in Hawaii can be time consuming, and there is plenty to do on each Hawaiian island to fill your days.

The only 2 islands in Hawaii that you can travel by ferry are between Maui and Lanai.

That said, if you don’t think you will ever be returning to Hawaii, or it’s very unlikely, and there is something you REALLY want to do on 2 islands (or more!) you may have to think hard if you do want to go island hopping in Hawaii with just 1 week in Hawaii!

While it is of course best if you have the opportunity to spend several nights on each island, it can also be considered reasonable to do a day trip to another island.

Although for the record, plenty of people will likely tell you not to!

So, it really depends on your priorities and managing your expectations! A day trip to another island in Hawaii can make for a long day! But, it is possible, and there are people who do it.

You can search for interisland flights through Hawaiian Airlines and Southwest Airlines.

And those are some of the best things in Hawaii to consider for your first trip to Hawaii!

Explore more of the Hawaiian islands:

Watch the videos to see Hawaii in action!

Find amazing things to do on Maui: Watch my Maui videos on youtube

Find amazing things to do on the Big Island: Watch my Big Island videos on youtube