So Kekaha Kai State Park is one of the best state parks on the Big Island. It’s one to consider visiting during your trip to Kona!

This great Hawaii state park has some of the best beaches on the Big Island!

And, to me, this state park will give you a “very Big Island” type of experience.

What do I mean by that?

This state park has great scenic beaches. It doesn’t have an active volcano, but it does have the aftermath of volcanic activity that you can see. You can see this in the form of lava fields (aka old lava flows), and you can see some lava rocks along the shoreline. 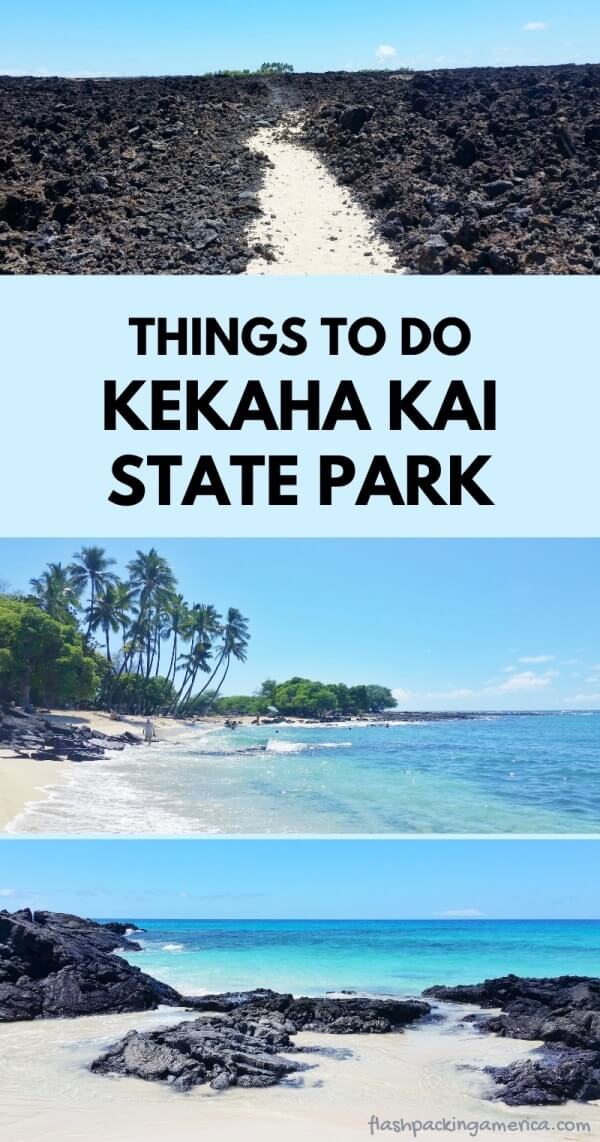 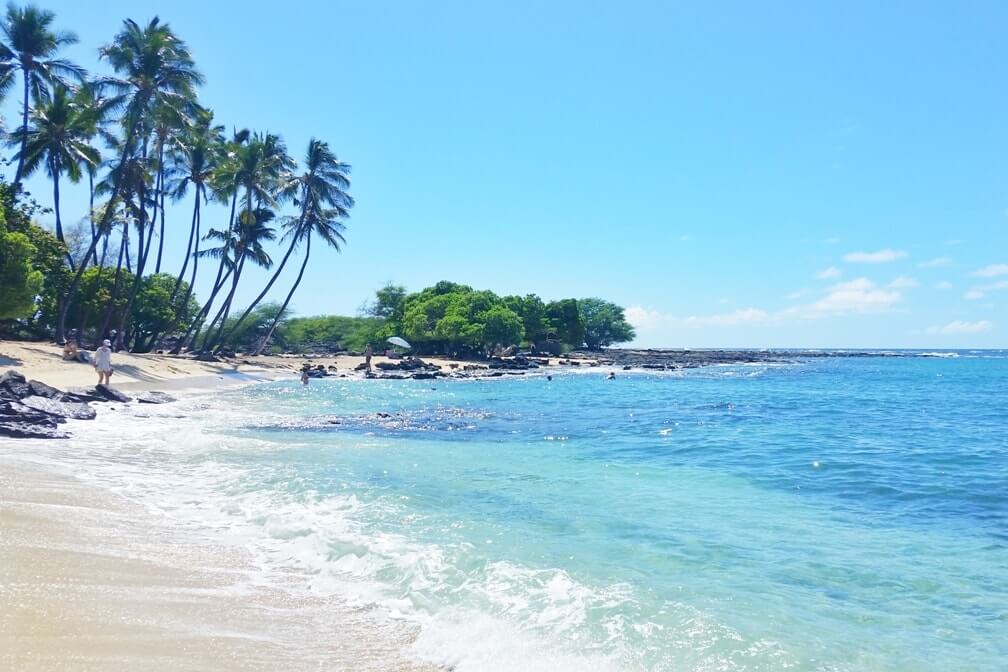 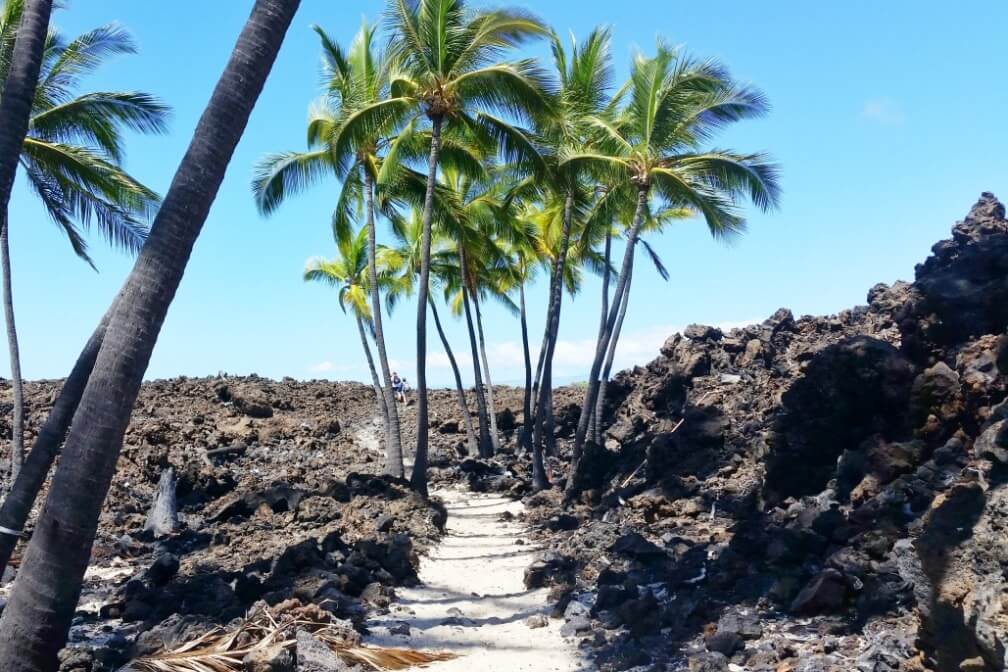 So first, the quick list of things to do in Kekaha Kai State Park, including beaches and hikes.

Then, a bit more about each of the things along with how to get there.

And then, the views of the Kona coast state park that you can get on your flight to Kona!

This is the most popular beach in the state park, and there’s pretty easy access along with basic beach facilities.

You can either drive a 4wd to get there, or you can hike across lava fields to get there.

Hike to the top of a hill for grand views of the Kona coast!

The state park gates are closed at night, but there’s an area you can drive to and park before the gates to view the stars in the sky on a clear night with a chance to see the Milky Way.

Getting to Kekaha Kai State Park

You’ll take the Mahaiula entrance to get to Mahaiula Beach and the start of the hike to Makalawena Beach.

This is the southern entrance of the state park.

So when coming from Kailua-Kona, you will pass this section first.

You’ll take the Maniniowali entrance to get to Kua Bay and the Puu Kuili hike.

Between these 2 entrances is the road you’ll take to drive down to Makalawena Beach, if you have a 4wd. There is no sign for this.

Waves over 3 feet high are for experts – all others should stay out of the water and away from the shoreline!

Check for current alerts before you go.

This Hawaii state park is open from 8am to 7pm. Check current open and close times.

A bit more about each of these Kekaha Kai State Park activities!

This is the Kekaha Kai State Park beach that has the most developed beach facilities. There are proper bathrooms and an outdoor shower. There are sunny picnic spots that will give you ocean views as you eat. There was a lifeguard on duty at Kua Bay when I was there in normal times. (The lifeguard tower is a relatively recent addition in the past few years in case you see mentions online about how there are no lifeguards at Kua Bay.)

It’s also the only beach in the state park with a paved road to get to, which also makes it the easiest beach to get to. And it’s a scenic drive to get to Kua Bay!

Likely because of these conveniences, this is also the more popular beach.

But if you want to try to find some of your own more private space with less people, try walking off to the far left as you’re facing the ocean.

You can also find a path to this section from the main road you drive down, before you get to the parking lot. Be on the lookout on the coastal side as you get closer to the Kua Bay parking lot.

There’s a small parking lot at the end of the road. When that fills up, you will basically just park on the side of the road leading to Kua Bay where you can find space.

Then, off to the beach you go!

Puu Kuili is the hill that you will see if you are driving on the highway past the state park.

If you enter the state park at the Maniniowali section (Kua Bay), then you’ll distinctly see it straight on as you enter the park.

You can hike to the top of this hill!

The trail to the top is right off the road you’ll drive to get to Kua Bay. You can park at Kua Bay and then walk back to here, or you can find a spot to park closer to the start of the trail.

And then, UP you go to the Puu Kuili summit! This is a relatively short trail to the top, but it will be HOT and it will give you a work out, so be sure to bring water as a part of your Hawaii hiking essentials!

After you get to the top, you can go back down the way you came, or you can consider on to the other side which will eventually take you to Makalawena Beach. (There is an alternate more common trail to Makalawena Beach listed below.)

Compared to Kua Bay, Mahaiula Beach will be the quieter beach that’s relatively easy to access.

And, it’s a “very Big Island” type of drive to get there – a drive through lava fields! Once you turn off the highway and onto the road that leads to the Mahaiula parking lot, it’ll soon turn into a dirt path with lava fields (old lava flows) on both sides. It’ll be a bit of a bumpy ride.

As you’re driving down the road, you’ll come to the parking lot, which will still be surrounded by lava fields.

The walk to Mahaiula Beach

Then the final stretch to get to the beach will be a walk of a few minutes once again surrounded by lava fields.

And then, you can go swimming at Mahaiula Beach! I saw a turtle swimming here! There are also signs around for respecting Hawaiian monk seals. So I would take that to mean they may be regular visitors to this beach, although I did not see one. 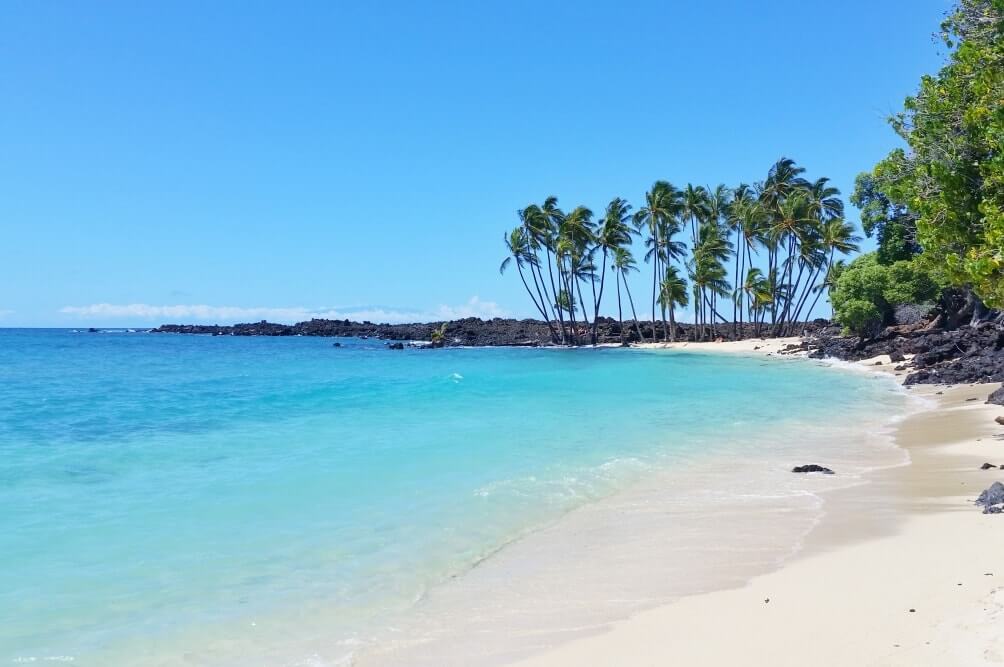 And if you really want to find a private spot on the beach, Makalawena Beach might be your best chance! There’s a wide stretch of beach, so if you keep walking, you may just be able to find a spot with no people around.

And, the thing about Makalawena Beach that gives it a good chance to have less people around is that it kind of requires effort to get there.

Drive to Makalawena Beach with a 4wd

One option you have to get to Makalawena Beach is to drive a rather bumpy road. You’ll turn onto a road right off the highway, and then you will basically drive straight to the coast. Then, it’ll be a drive directly along the coast until you reach the “end” of the road as far as you can go. You’ll then park and then walk to find your perfect spot on the beach! 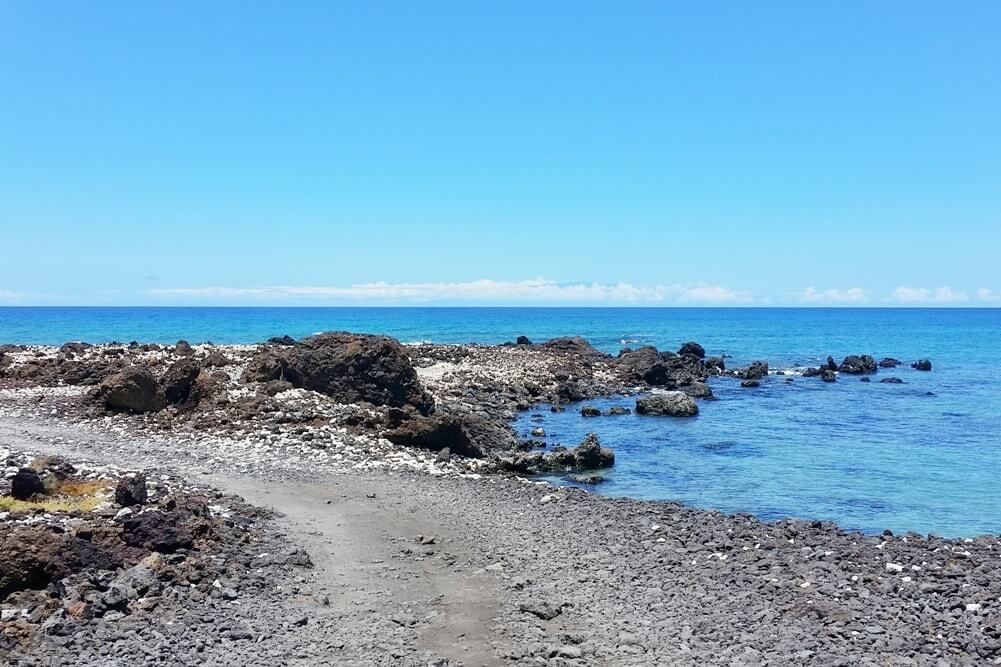 The other way you can get to Makalawena Beach is to hike there.

So first you’ll get yourself to Mahaiula Beach. Then, off to the far right side as you’re facing the ocean is a trail. It will be a mix of sandy trail and rocky trail. You will be hiking with lava fields on both sides! Once you get to the beach, you can walk to find your perfect spot! Because specks of lava rock can be sharp, it would be best to wear closed-toed shoes.

If you want to make it a longer coastal hike, you can keep walking along the shoreline, which will eventually take you along the same road as the drive to get to Makalawena Beach so you can have those same coastal views as the drivers. This will give you some more beautiful coastal views with no one around (probably)!

There are many spots on the Big Island that you can go to see the great night sky, and Kekaha Kai State Park is one of them!

The gates to the state park do close for the Mahaiula section and Maniniowali section so you won’t be able to drive all the way down to the beach. But when it’s dark you can still drive to just before the gates and park your car to look up at the stars.

I went to the Mahaiula section and was with people who said what we were looking at was the Milky Way.

And one more thing!

You might be able to see Kekaha Kai State Park as you’re flying into Kona airport!

Road to Mahaiula Beach through the lava fields 👆

And that’s a bit of what you can do at Kekaha Kai State Park!

And more great things to do on the Kona coast!

And more great beach hikes around the Big Island!