Makalawena Beach is a part of Kekaha Kai State Park which is one of the best Hawaii state parks on the Big Island.

And lava rocks from a volcano!

But unlike Kua Bay, there are far less people at Makalawena Beach.

What makes this beach more of a “secret” beach on the Big Island?

It kind of requires effort for you to get to Makalawena Beach.

This isn’t THAT secret of a beach so you likely won’t have the whole beach to yourself, but it’s a white sand beach that you’ll very likely see far less people at compared to Kua Bay.

It’s also kind of long, so you’ll have spots on the beach to choose from to get you to somewhere that can feel more like your own spot.

How to get to Makalawena Beach

There are people who go to Makalawena Beach by jeep. And you do need a jeep (or another type of 4 wheel drive) if you want to drive to the beach, as it’s off-road driving on pretty rough roads.

This is the most popular way to get to Makalawena Beach, and probably the easiest when you’re getting to the beach by foot.

3. Find the trail to Makalawena Beach

4. Walk through lava fields from Mahailua Beach to Makalawena Beach!

This is the way I went to Makalawena Beach, and this will make for a long day of walking to get back to your car.

3. Do the Puu Kuili hike to the top of the hill!

4. Walk down the other side of the Puu Kuili hill

Here’s a bit more on hiking to Makalawena Beach!

…from Mahaiula Beach since that’s the more common way!

That is from north to south. So Makalawena Beach is the “middle” beach.

If you’ll be hiking to Makalawena Beach from Mahaiula Beach, your hiking trail is basically a trail across lava fields.

Side note! HAWAII FLIGHT TIP for pictures of Kona’s white sand beaches from above! I got these aerial photos during my flight from Honolulu to Kona. I sat on the LEFT side of the plane. If you fly Southwest to the Big Island, be sure to see these tips for open seating so you can make sure to increase your chances of getting a window seat!

Getting to the Makalawena Beach trail

The road to Mahaiula Beach will first start off as a paved road, and then it’ll turn into a dirt road. It can be a bit bumpy, but normal cars are generally okay. You’ll be driving with lava fields on both sides of the road!

Then you’ll keep driving until you come to the parking lot.

From the parking lot, you’ll see a trail. This trail will lead to Mahaiula Beach.

You’re at Mahaiula Beach! I’ve seen turtles swimming here, over to the left side as you’re facing the ocean.

Once you’ve arrived at Mahaiula Beach, you’ll head off to the right (when you’re facing the ocean). It may initially look like you need to walk in the ocean to get to the other side of the bay, but there’s a small path just behind the beach.

And then, you’ll find the trail that leads to Makalawena Beach!

And then you’ll continue on through lava fields to get to the beach!

Walk across Makalawena Beach to find your perfect spot!! 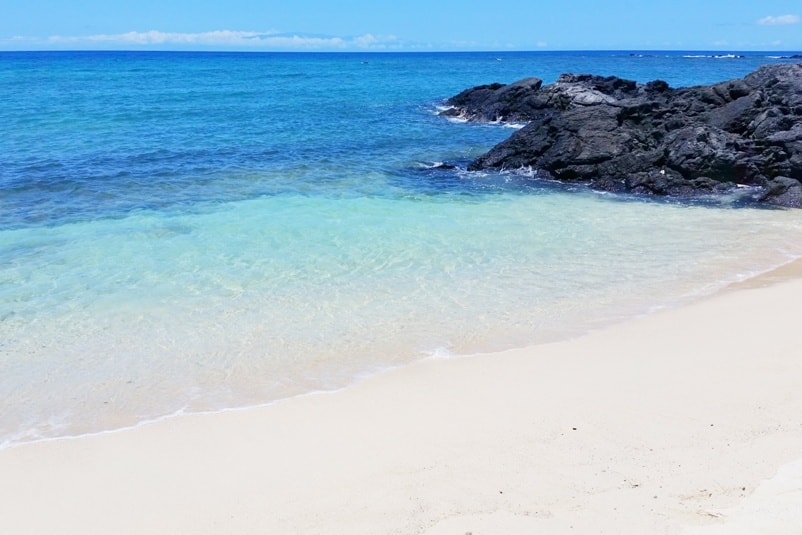 What shoes to wear to Makalawena Beach

It’s very possible that you’ll see people wearing sandals and flip flops on this trail, but I think wearing proper shoes is best.

You will be walking on lava rocks, and wearing sandals means having exposed feet.

And that means that you can end up with small specks of lava rocks on the bottoms of your feet. And those small specks can be sharp!

They can also lodge into your skin making it difficult to pick out. (This can be a good reason to have tweezers in your first aid kit for Hawaii just in case!)

So for protection, consider wearing shoes to this beach!

And that’s a bit of what you might see with a hike to Makalawena Beach!

And see more of the best Hawaii state parks on the Big Island.

Explore more of the best hikes on the Big Island!

HAPPY SEEING A WHITE SAND BEACH ON THE BIG ISLAND AT MAKALAWENA BEACH! 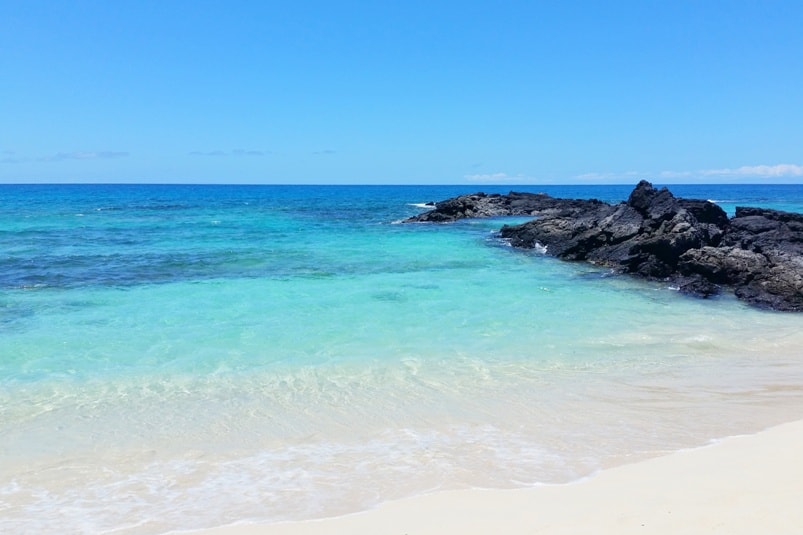