Makalawena Beach is a part of a Hawaii state park, the Kekaha Kai State Park.

This is one of the great white sand beaches on the Kona coast of the Big Island.

It’s located within the Kekaha Kai State Park, alongside Kua Bay to the north and Mahaiula Beach to the south. Makalawena is the “middle” beach.

While Kua Bay and Mahaiula Beach are accessible with relative ease, Makalawena Beach requires a bit of extra effort to get to. And with that effort requires extra time to get to, compared to the other 2 white sand beaches that are a part of the state park.

One of the ways that people get to Makalawena Beach is by driving.

But it’s off-road driving and this is one of the roads on the Big Island that requires a 4-wheel drive. And there will be bumpy parts.

But you might find it to be a fun ride in your jeep car rental that’s right along the ocean for a part of the drive!

I walked some of this road, as I merged onto the same road as I was walking from the Puu Kuili hike to Makalawena Beach.

Those who don’t do the drive would typically park at the Mahaiula Beach parking lot, and then do the hike across lava fields from Mahaiula Beach to Makalawena Beach. But another option is to come from the Kua Bay side of the state park (which is also the Puu Kuili side) which is what I did.

Because of the time and effort required to get to Makalawena Beach, it means this beach gets less crowds, although you probably won’t get a completely empty beach. It does seem like Makalawena Beach has become a bit more known. But it’s still pretty empty!

And in general, it’s always good to check for official alerts before you go (this can include beach warnings), and here’s the official state park website.

First, the quick list of what you can expect from the drive to Makalawena Beach.

Then, a few more pictures from this drive!

1. Find the road to the beach off the highway

2. Drive down to the coast

3. Drive along the Kona coast!

Is the road to Makalawena Beach that bad to drive?!

There have been a few reviews on the drive to Makalawena Beach being a bit difficult, even with a 4 wheel drive. Read this tripadvisor review if you’re seriously considering this drive.

More pictures below on what the drive looks like!

Again, these pictures are mostly from my walking path, but it is also the road that can be taken to drive to the beach.

Where is the start of the road to Makalawena Beach?

I very much recommend downloading the free app called mapsme. Once you have this app, you’ll then download the specific Hawaii map which will become accessible offline.

The road to Makalawena Beach is on mapsme so having the app will make finding the trail MUCH easier! By using the GPS locator on your phone along with map, this can make finding the road less difficult.

Coming from the south and Kona town, the ocean and state park is on the left side. You’ll first pass the “Mahaiula” entrance of the Kekaha Kai State Park. Once you pass this you’ll want to start paying attention and look for the dirt road along the coastal side.

The road you’ll turn down is a dirt road, and the Puu Kuili cinder cones (hill) will nearly be head on when you turn onto the road (off to the right side a little). So as you’re driving on the highway, you can look for the hill as a landmark too.

If you’re driving from the south and you come across the entry for the “Maniniowali” entrance of the state park, you’ve gone too far! 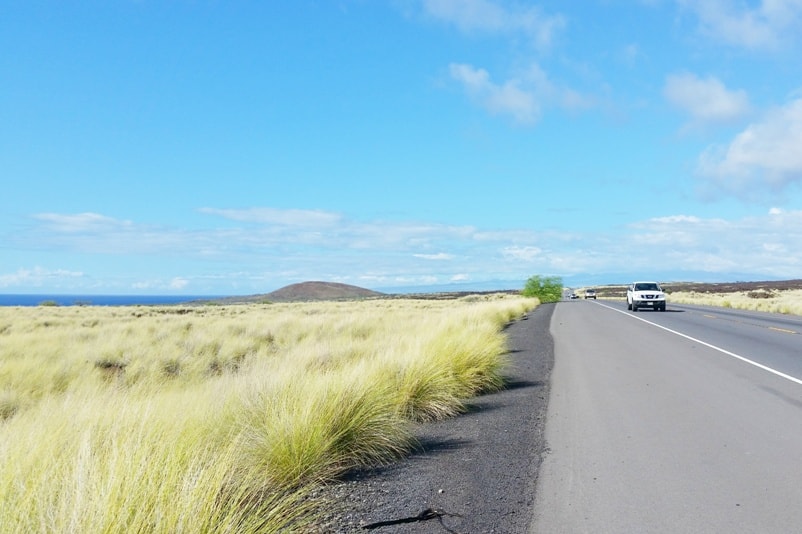 Start the drive down to the Kona coast!

And then basically you’ll keep driving and follow the road down to the coast!

You might even consider finding a spot to stop the car when you get closer to the hill and hike up Puu Kuili for amazing views of the Kona coast from above!

Drive along the Kona coast!

…and take in the scenic coastal views!

Drive to the end of the road

As you drive along the coast, you will come to a point where you can drive no more, as there will be a gate set up.

This is where you can park your car and then walk the rest of the way to the beach.

It’s said that sometimes locals on the Big Island will put up signs like “no trespassing” to try to keep tourists away so sometimes it’s hard to know what’s legit and what’s not.

In this case, it would seem that the “inland” side as you’re walking towards Makalawena Beach is actually private property, so just be sure to keep on the path to the beach.

When I was there, there was also a “no parking” sign on the gate, but it’s unclear which part is the “no parking” part.

And so, as with all things on the Big Island, do things at your own risk!

Makalawena Beach is kind of long, so how long you walk will depend on where on the beach you want to set up!

The long stretch of white sand you see above is Makalawena Beach.

Explore other parts of Kekaha Kai State Park too: