Hookipa Beach is a popular beach that’s located near Paia town on Maui. (Paia is often considered the unofficial start of the Road to Hana drive.) 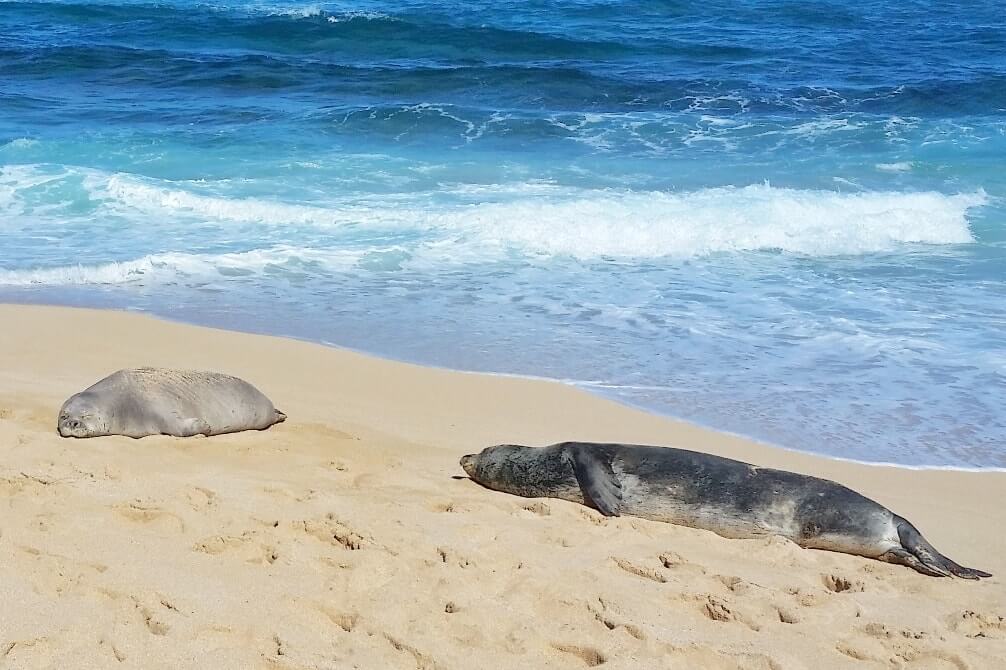 So there are 2 things that Hookipa Beach is best known for: surfing and turtles.

And it is lesser known, but there’s a chance that you can see Hawaiian monk seals, too!

So if you’re at Hookipa Beach to see turtles on the beach, you might as well go to see if the seals are on the beach too, right?!

The seals usually come to shore in a completely separate area from the turtles, and now you know to be sure to look for the Hawaiian monk seals too, and not just the turtles!

Hawaiian monk seals are a certain type of seals that are only found around the Hawaiian islands.

They are also an endangered species, which can make seeing a Hawaiian monk seal an even more special of an experience!

Federal and state laws prohibit harassment of these animals.

Monk seals are very impressionable and easily habituated by humans.

Interacting with seals will change their behavior and hurt their chances to survive in the wild.

Please do not disturb, feed, or approach these seals.

Seals need to rest on the beach and are an endangered species protected by state and federal law.

Law enforcement is serious about people disturbing Hawaiian monk seals. There has even been a case where a tourist was fined $1,500 for coming too close to a seal, and another tourist was fined (unknown amount) for touching a seal.

So, look but don’t touch! (And don’t get too close either!)

There might already be a barrier set up around the seals if you go when they are there. There may also be a volunteer around to make sure people don’t get too close. You can ask them questions about the seals too!


Save the Maui video playlist to watch on youtube later!

Explore the outdoors all over Maui:
PLUS... Should you book a Maui tour or do it on your own?

And if you’re heading to other Hawaiian islands:

How to have the perfect Road to Hana stop that comes with a chance to see Hawaiian monk seals!

Hookipa Beach is on the way to Hana town (aka on the Road to Hana), past Paia town.

So you can make this a stop at the beginning of your trip or at the end of the day if you’ll be passing by Hookipa Beach before dark.

When you’re driving from Paia and going in the direction of Hana, you’ll first come across Hookipa Beach.

To make this a more worthy stop, you may consider also making a visit to the Hookipa lookout.

It probably doesn’t matter too much whether you start off at the beach or the lookout, but I started at the lookout! The beach and lookout both have parking, and it’s possible that at both you might have to wait for a parking spot. While there’s a good amount of parking spots, this is a popular spot, so it could get full.

Look around at the lookout!

You can take a walk around the Hookipa Lookout from the higher area, and there’s an area that you can go down to get closer to the ocean too.

Walk down towards Hookipa Beach

Then after you’ve seen Hookipa Beach from above at the lookout, you can start making your way down toward beach level, aka towards the seals!

Have a look to see if there are turtles on shore

Once you get down near beach level, you’ll be near the area where turtles are frequent visitors. As you’re facing the ocean, this will be off to the right.

See if there are turtles there!

Hopefully they are there!

Where to see seals at Hookipa Beach

In short, the Hawaiian monk seals are somewhat frequent visitors on the very LEFT side of Hookipa Beach, as you are facing the ocean.

So after you have a look at the turtles, you will basically walk all across the beach.

And then when you reach the other end…

Hopefully there are Hawaiian monk seals on shore so you can see them!

I visited Hookipa Beach twice, one time was right before sunset and the other time was late morning. There were 2 Hawaiian monk seals on the beach both times. The first time there was a volunteer there who said the monk seals had basically been there all day.

And so Hookipa Beach is one stop to consider making on the Road to Hana!

Plan more of your Road to Hana trip!