Hookipa Beach is the beach in Maui that is known as a location where tons of turtles frequently come up onto shore and lay on the beach.

So if you’re looking for a “turtle beach” in Maui, Hookipa Beach can be it!

This is located in the Paia area of Maui. This also means that to see turtles in Paia you can go to Hookipa Beach!

There is also what’s often called the “turtle town” of Maui. That’s a different spot on a different part of the island, and that is more so about having a greater chance to swim with turtles as you are snorkeling. (Although from shore you may also see a turtle swimming and popping its head up in the water too!) 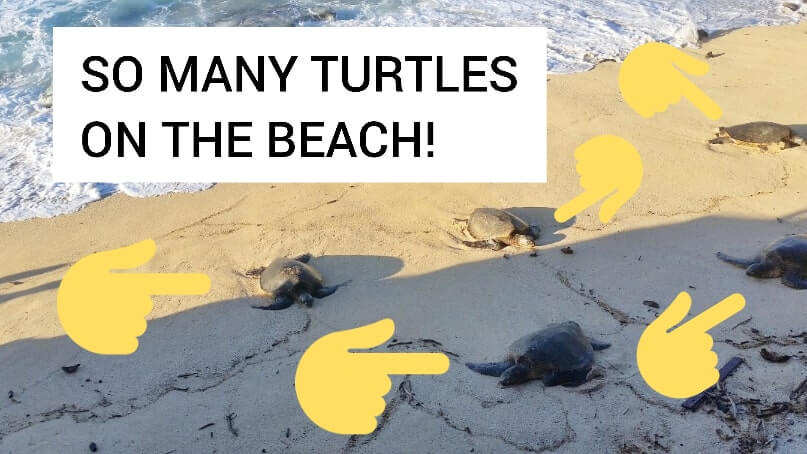 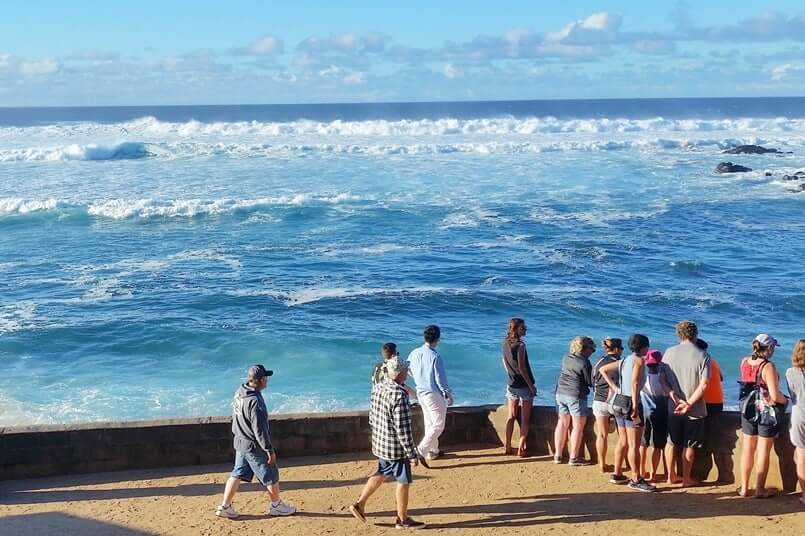 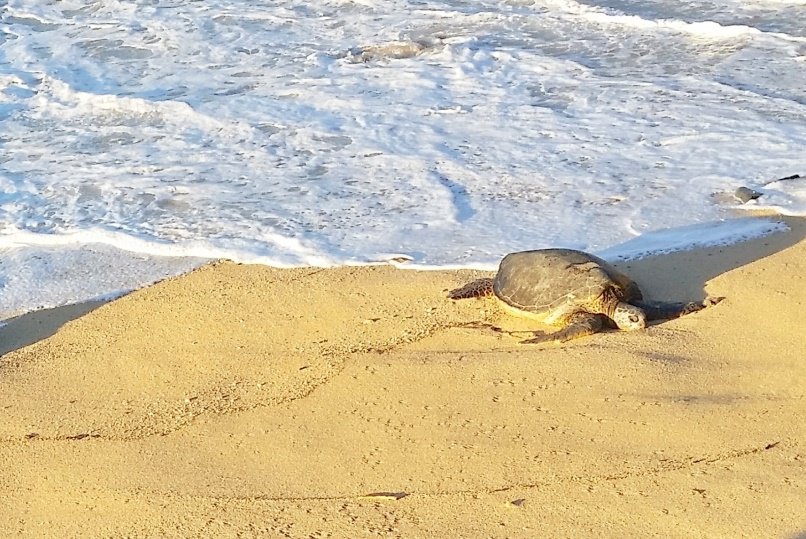 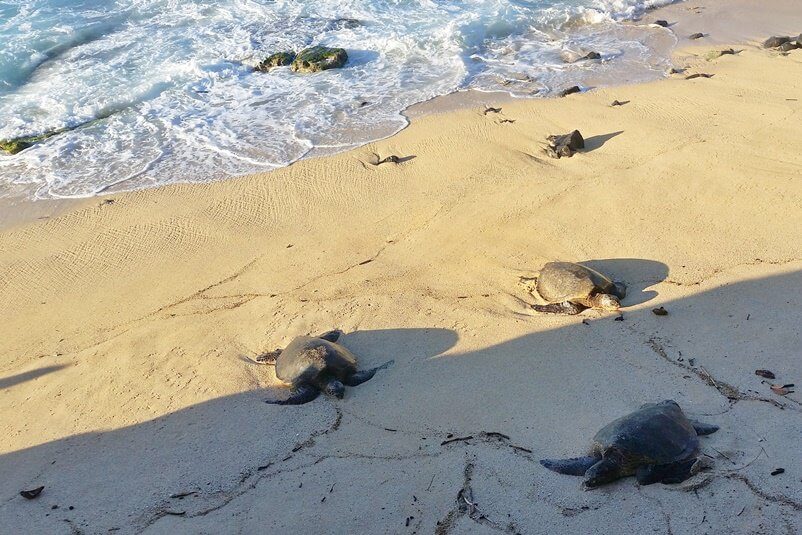 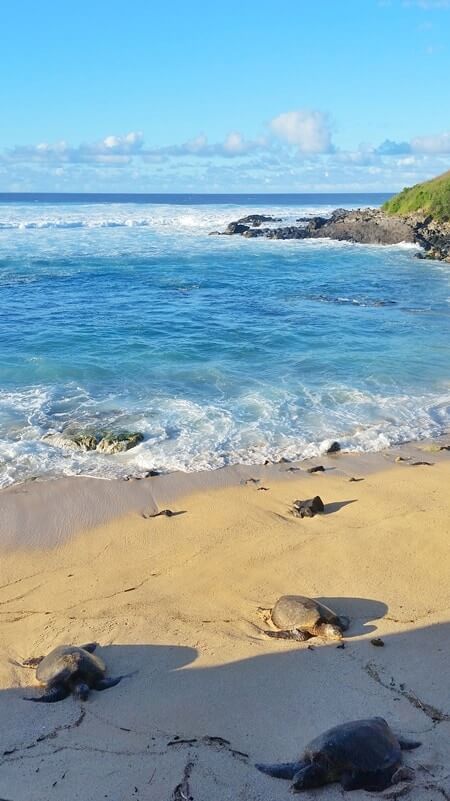 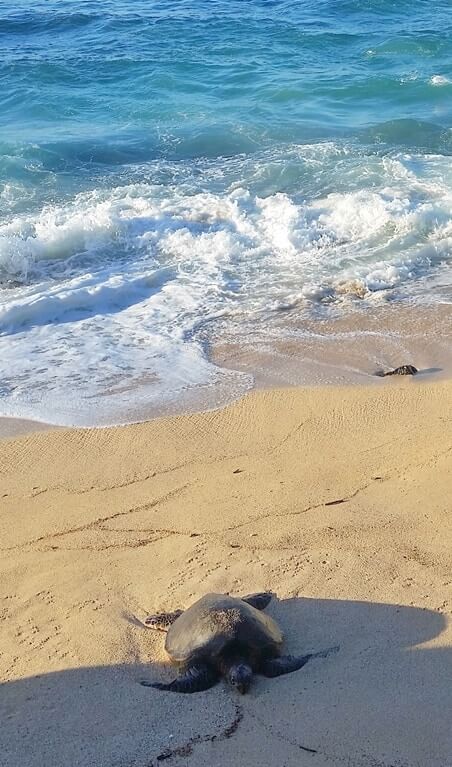 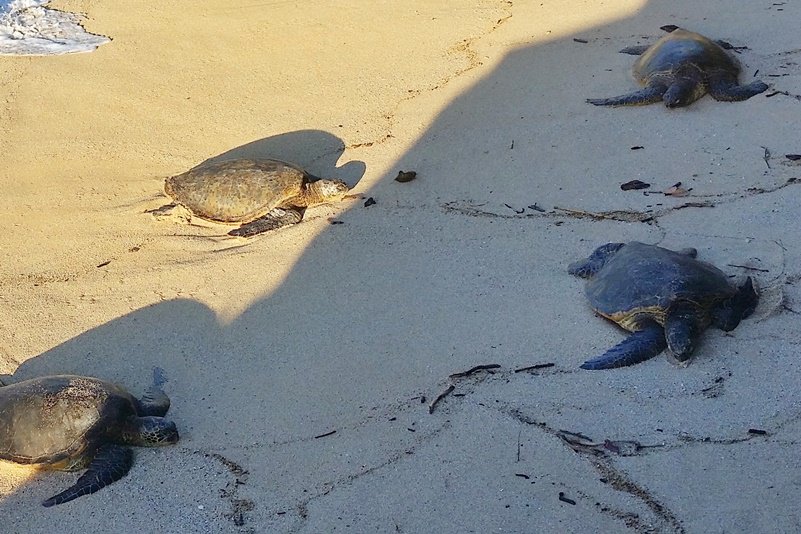 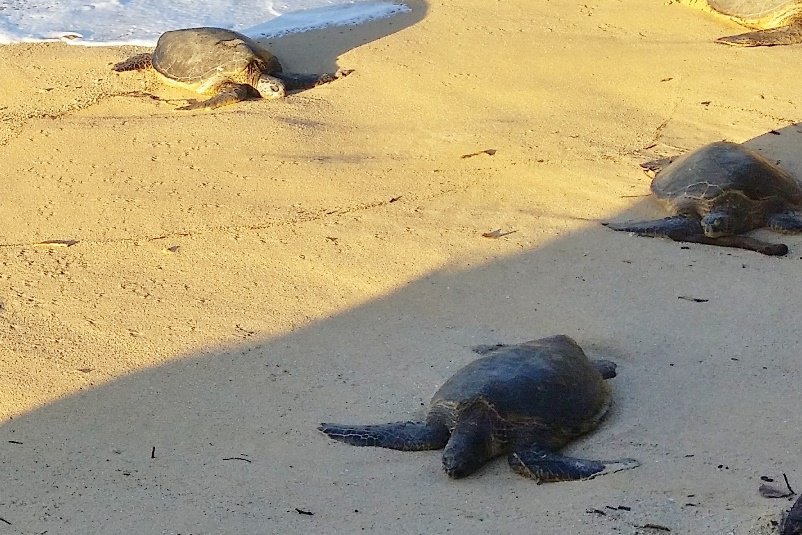 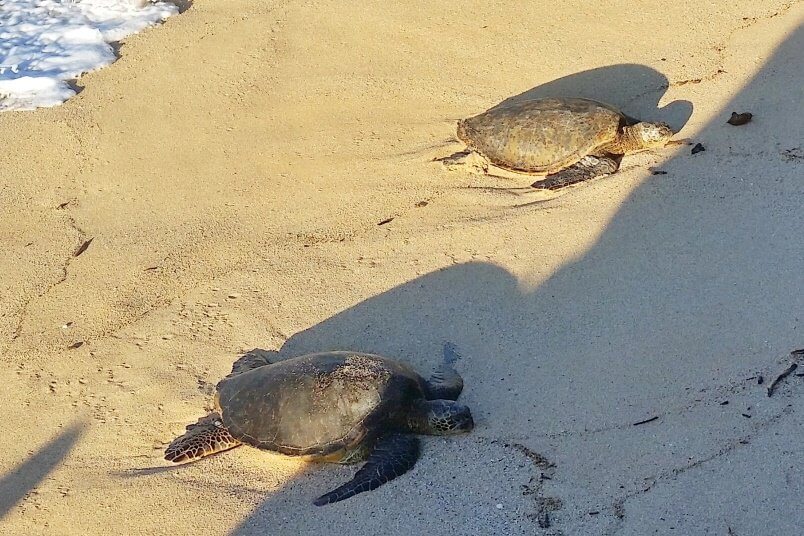 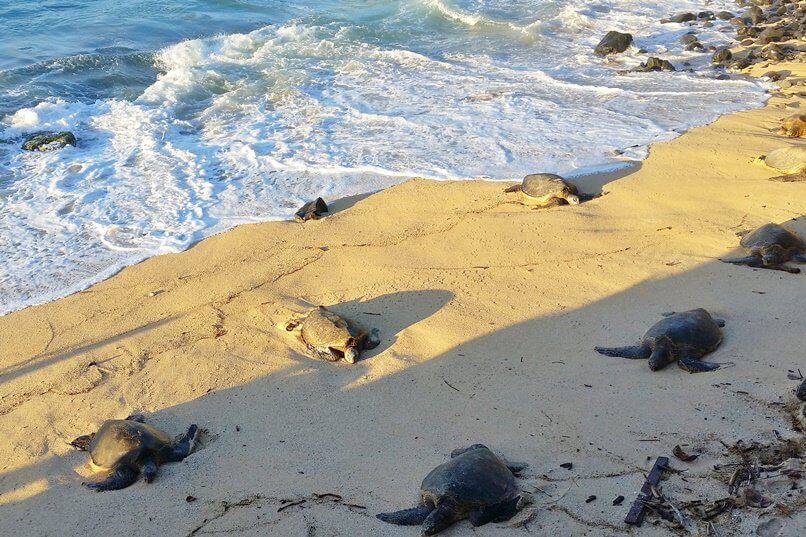 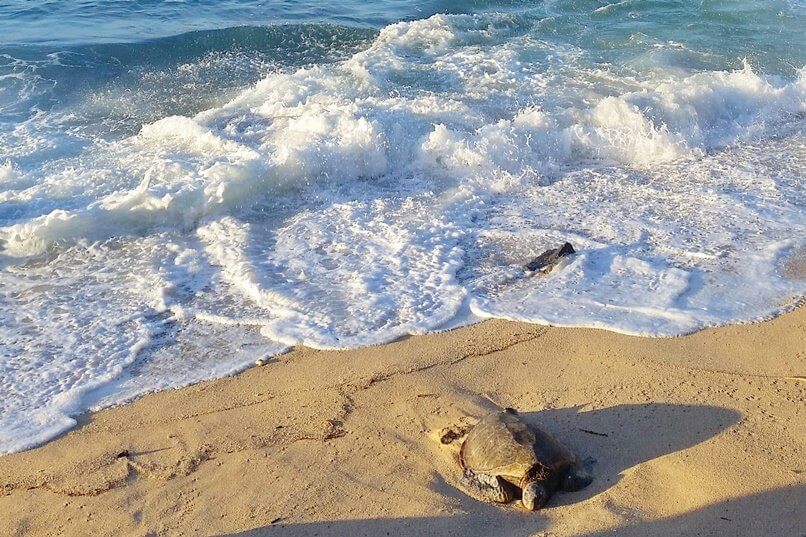 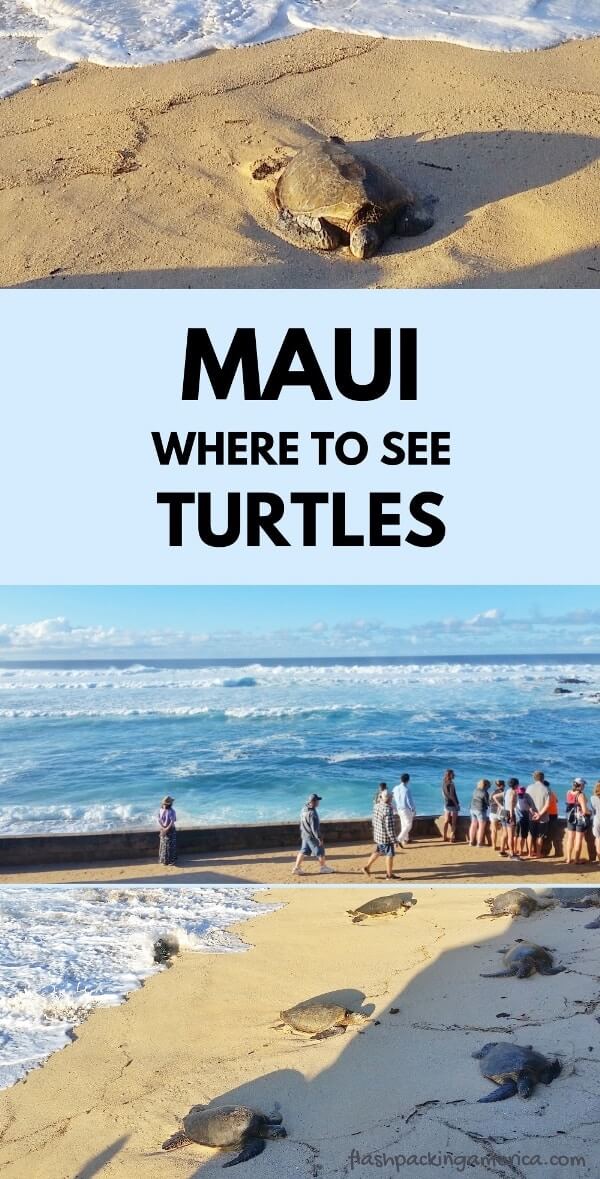 If you can’t see the Maui turtle beach video above, you can watch it on youtube.

So Hookipa Beach is known for turtles. 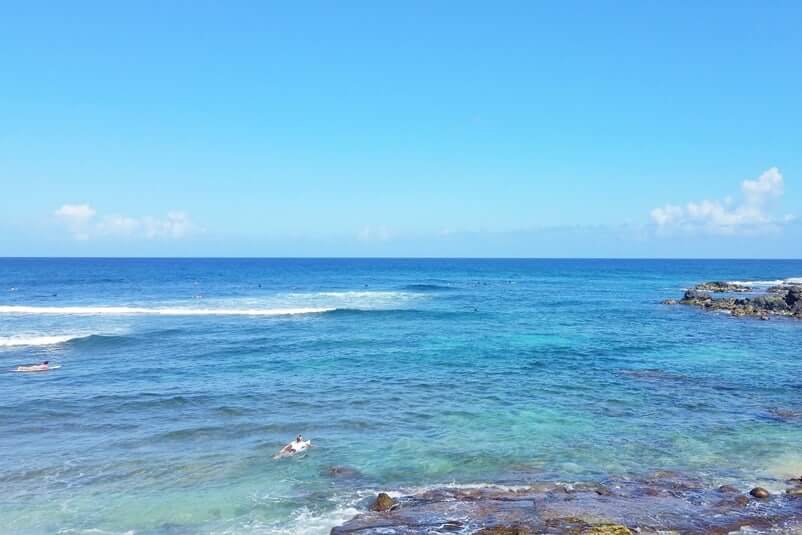 And it is lesser known, but there’s a chance that you can see Hawaiian monk seals, too!

The turtles may or may not be at Hookipa Beach!

Hookipa Beach is one of the most reliable spots in Maui that you can go for the chance to see turtles laying on the beach. That said, they are wildlife (wild marine life) so they do what they want! There is no guarantee that they will be there when you go.

When is the best time to see turtles in Maui at Hookipa Beach?

I visited Hookipa Beach twice, one time was right before sunset and the other time was late morning. There were a lot more turtles laying on Hookipa Beach at sunset compared to the morning. At sunset, there were a TON of turtles. In the morning, there was like 1 turtle. In general, it seems like going to Hookipa Beach around sunset can increase your chances of seeing a lot of sea turtles.

But in looking at the google reviews pictures, it also seems like there have been times that people have seen lots of turtles during the day too.

Of course, your experience may vary!

When I went to Hookipa Beach at sunset, there were over 15 turtles laying on the beach along the shores of Maui!

By comparison, when I went to Hookipa Beach in the morning, there was only 1 turtle laying on the beach along the shores of Maui. (That I could see.)

Where to see turtles in Maui at Hookipa Beach

In short, the sea turtles are frequent visitors along Maui’s shores to the very RIGHT side of Hookipa Beach, as you are facing the ocean.

Honu = turtle. Or more specifically, it refers to the green sea turtle. (See more Hawaiian words you’re likely to come across during your Hawaii vacation.)

People who live in Hawaii take the safety of turtles very seriously! In short, show the turtles respect! This means allow them to rest in peace, and try not to bother them or get too close to them.

What the State of Hawaii wants you to know when you see a turtle in Hawaii:

NOAA and DLNR recommend, for your safety and the animals’ protection, that everyone stay at least 10 feet (3 meters) from all sea turtles.

If maintaining this distance isn’t possible, keep safety in mind and move away from the animal as carefully as possible, avoiding sudden movements and other actions that might disturb the animal.

Law enforcement can be serious about people disturbing marine life in Hawaii. There has even been a case where a tourist was fined $1,500 for not respecting marine life that included a turtle.

So, look but don’t touch! (And don’t get too close either!)

There might already be a barrier set up at Hookipa Beach to let you know to not get any closer than that.

If you see a red rope, this is to remind you to keep your distance from the turtles on the beach in Maui!

You may see a rope on the sand to remind you to not get too close to the turtles of Hookipa Beach.

Or there may be a more obvious barrier made of rocks by volunteers.

What the Hawaii Wildlife Fund wants you to know about the resting zone for Hawaiian green sea turtles:

Show respect to the turtles.

Give the turtles more space when they are exiting and entering the ocean.

Please do not disturb the turtles. (Speak softly, keep dogs away, turn your camera flash off.)

How to view Hawaiian green sea turtles respectfully in Maui:

Hawaiian green sea turtles are said to be native to the Hawaiian islands.

The State of Hawaii considers green sea turtles to be a threatened species. There are also hawksbill sea turtles that are said to be less commonly sighted in Hawaii, and these types of turtles are considered to be an endangered species.

More below about what your trip to Hookipa Beach to see turtles can be like!

There are affiliate links on this page.
You can read reviews for the best Maui tours at getyourguide.

And if you’re heading to other Hawaiian islands:

A bit more about getting to see the Maui turtles at Hookipa Beach!

I went to Hookipa Beach in January and February 2020.

Hookipa Beach is a popular beach that’s located near Paia town on Maui. (Paia is often considered the unofficial start of the Road to Hana drive.)

If you have plans to go to Twin Falls, then it can be perfect to stop by Hookipa Beach on your way back.

If you have plans to go to the Haleakala summit during the day, then it can also be perfect to stop by Hookipa Beach on your way back.

Iao Valley and Waihee Ridge Trail are also not too far from Hookipa Beach if you have plans to do either of those things in the West Maui mountains. (30-40 minute drive away.)

Otherwise, you can really just go to Hookipa Beach as a sunset activity!

When coming from West Maui or South Maui, shortly after you pass Paia is when you will come across Hookipa Beach.

To make this trip to Hookipa Beach more worthy, you may consider also making a visit to the Hookipa Lookout.

It probably doesn’t matter too much whether you start off at the beach or the lookout, but I started at the lookout!

Hookipa Beach and Hookipa Lookout both have parking, and I suppose it’s really not that big of a deal which one you choose. It’s possible that at both you might have to wait for a parking spot. While there’s a good amount of parking spots, this is a popular spot, so it could get full.

Look around at the Hookipa lookout!

You can look out from the higher area at the Hookipa Lookout, and there’s an area that you can go down to get closer to the ocean too.

Walk down towards Hookipa Beach

Then after you’ve seen Hookipa Beach from above at the lookout, you can start making your way down toward beach level, aka towards the turtles! (You can also drive down and hope to find parking at Hookipa Beach. But walking down, you can consider it a nice coastal walk!)

Once you get down near beach level, you’ll be near the area where turtles are frequent visitors on Maui. As you’re facing the ocean, this will be off to the right. So this is the side of the Hookipa Lookout, and the side you have just come down from if that’s where you started.

See if there are turtles there!

And hopefully you will see why Hookipa Beach can be called the turtle beach of Maui!

So this spot is basically like a turtle beach overlook. You can see the turtles from above!

I think the best views of the turtles are from this turtle beach overlook, but you can also go down to see the turtles directly along the shores of Maui from beach level too. (Remember to be mindful of keeping your distance!)

And then once you’ve seen the turtles… continue onward across the beach to see if there are seals at the other end of the beach! Both times I went (sunset and morning) there were 2 seals each time!

There’s also a picnic spot on the turtle side of the beach if you want to bring a picnic lunch and eat with ocean views! Someone can be a turtle monitor and periodically get up and see if any new turtles have arrived. 😁🐢

And so Hookipa Beach is one of the best places to go for a chance to see turtles laying on the beach!

There is also a “turtle town” in Maui, and that’s where you’ll want to go if you want a chance to SWIM with turtles! From shore, I also saw a turtle swimming when I was here. There are also snorkeling tours that go to places turtles are known to frequent so you can have a good chance of swimming with turtles around Maui. See the list of Maui snorkeling tours along with where to go snorkeling on your own.

See more things to do in Maui:

Are you headed to another island in Hawaii from Maui? More of the best things to do in Hawaii: