If you are into volcanoes, then the places on this list you must HIGHLY consider visiting (or seeing) during your trip to the Big Island!

Below, the first part will be where you can see vast and expansive lava fields that you can see as a result of volcanic activity in Hawaii.

This includes lava flows that reached the ocean. 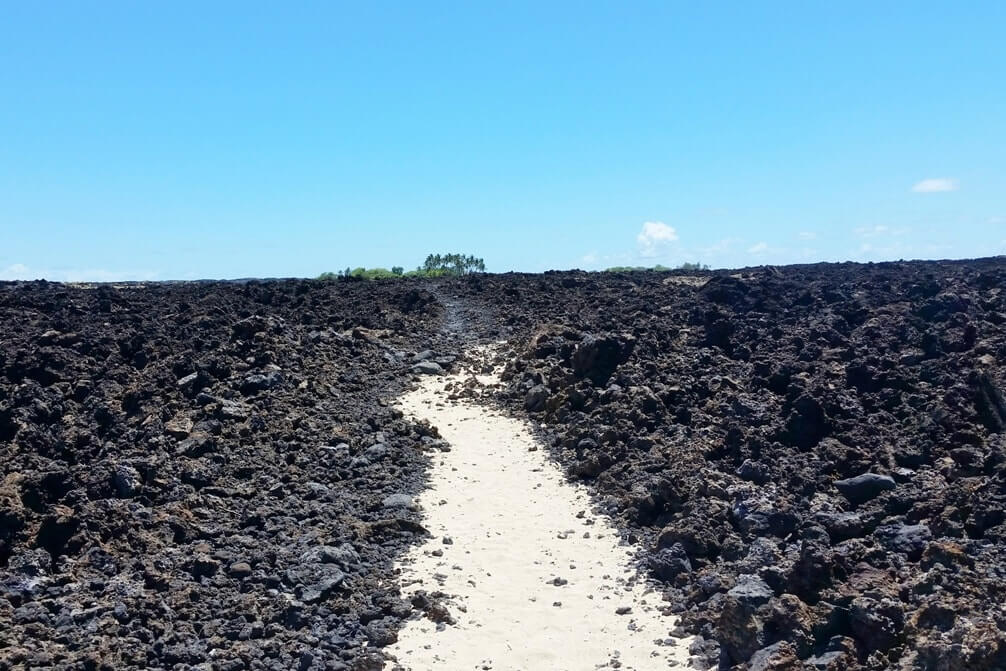 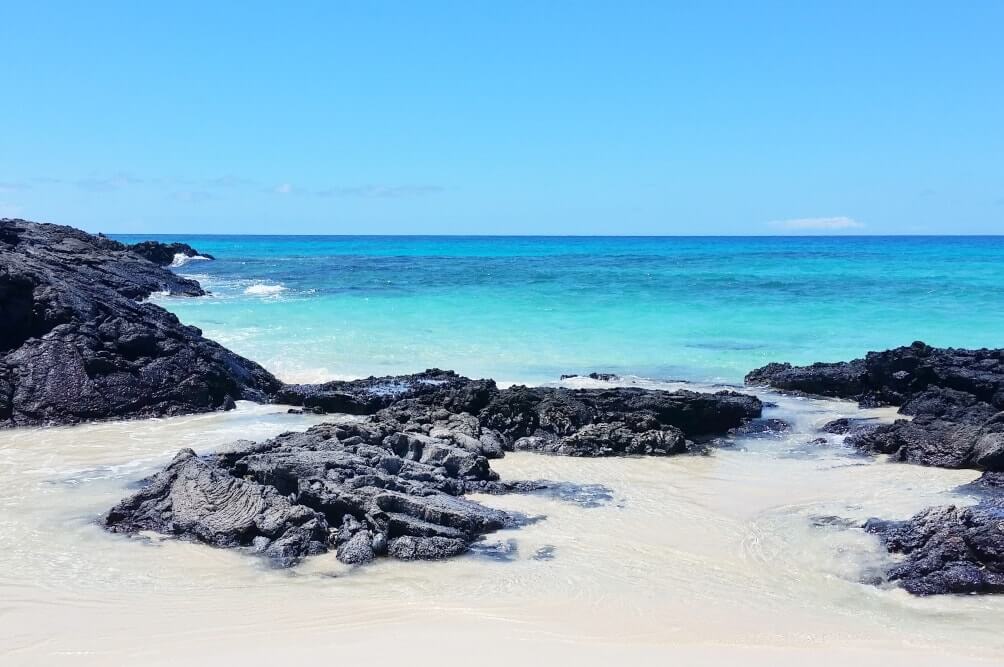 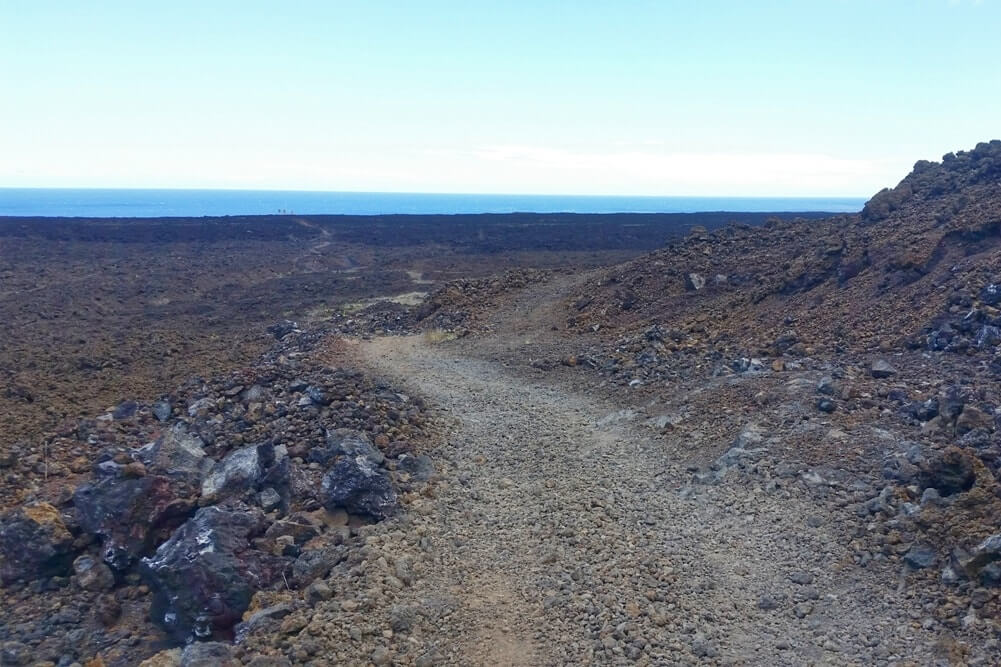 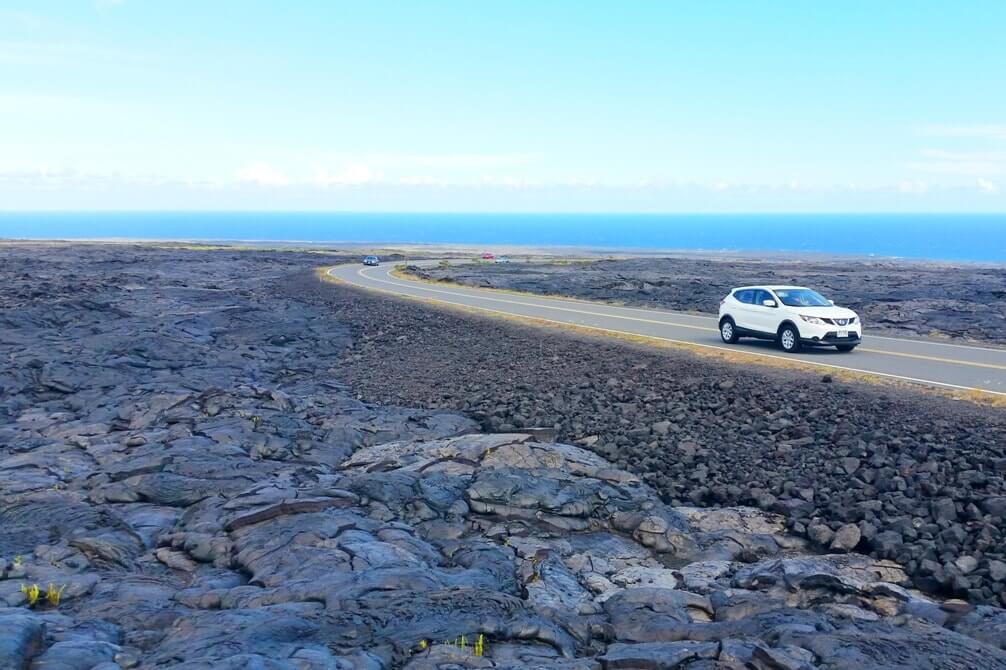 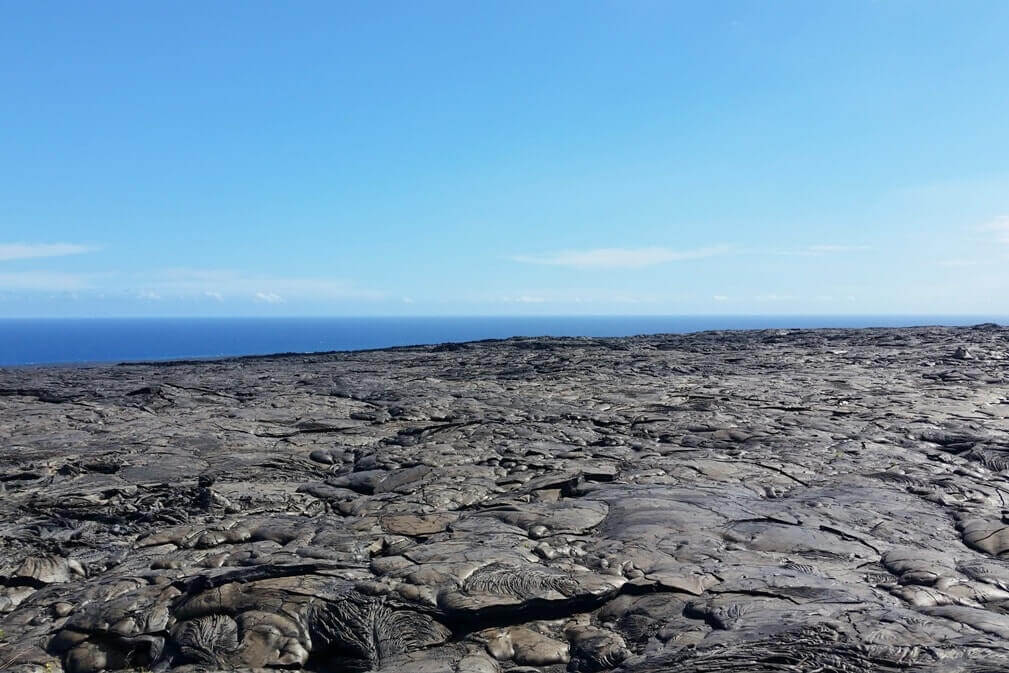 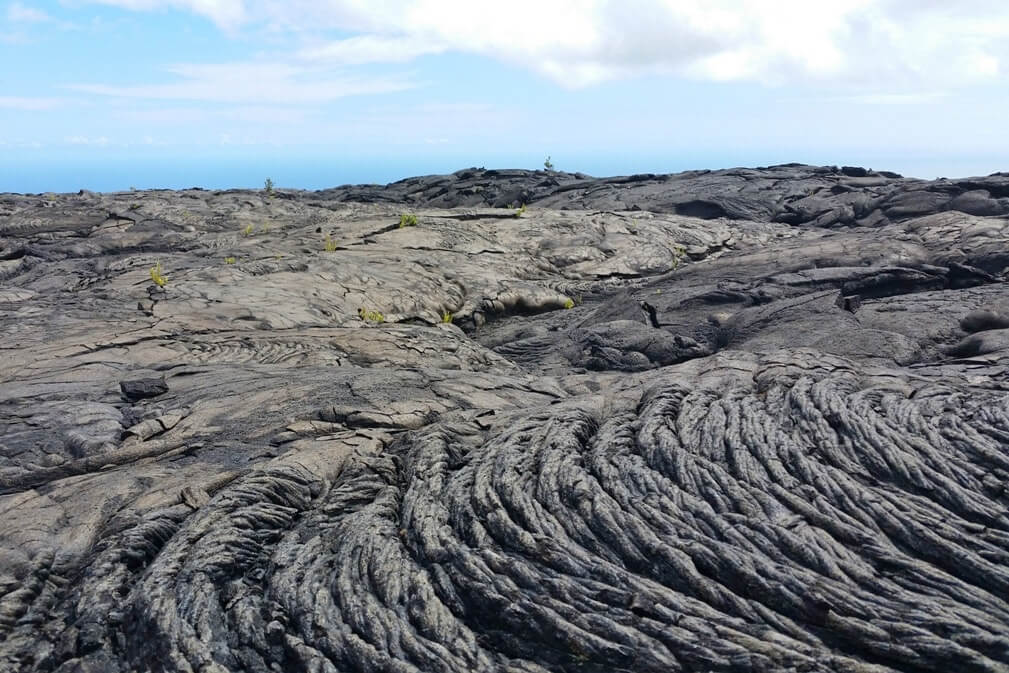 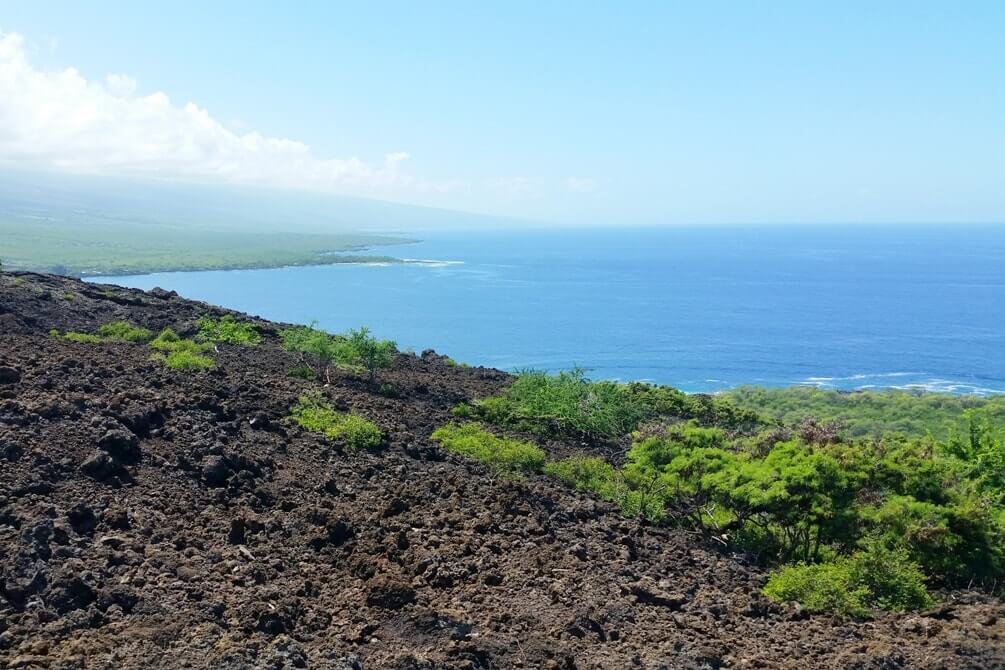 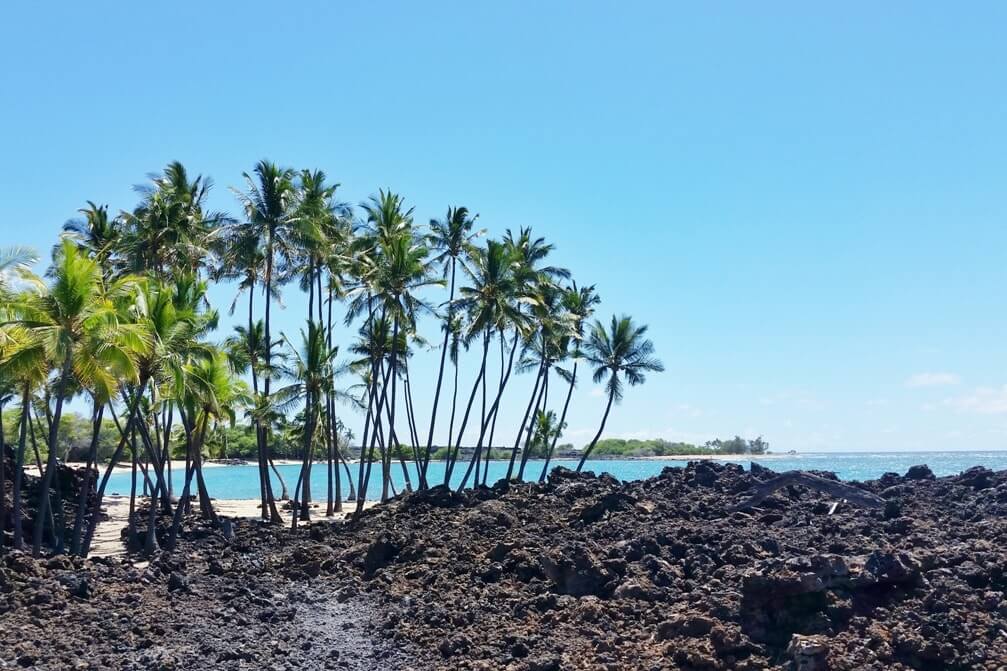 Then will be a couple more spots on the Big Island where you can also specifically see where the lava stopped flowing on a road. 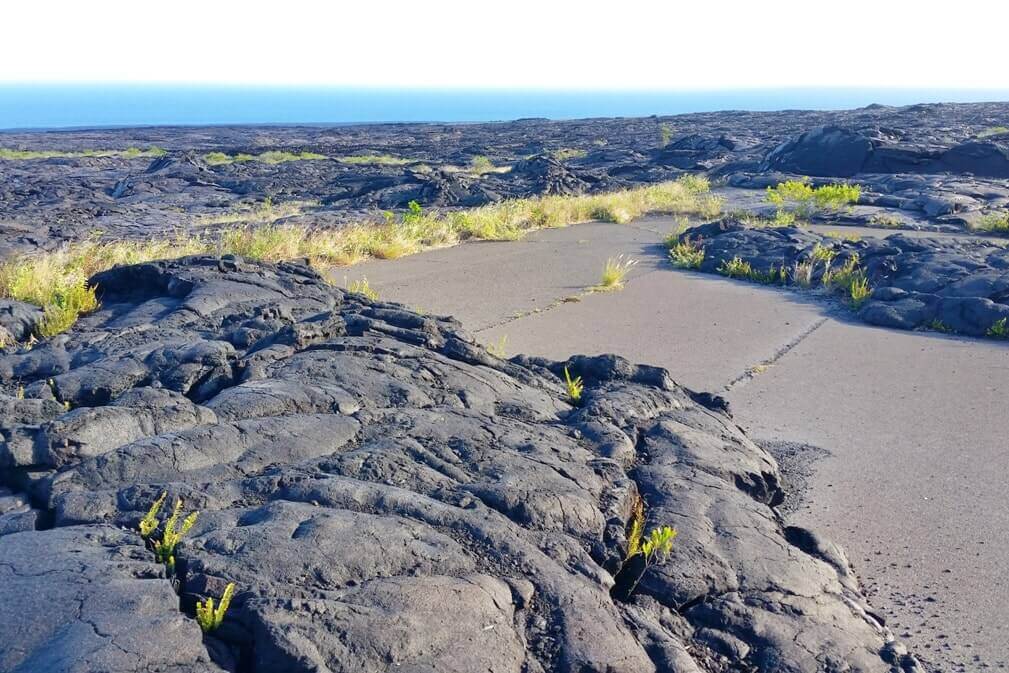 And then a bonus lava tube cave hike to do for a unique Big Island of Hawaii experience, since this is related to volcanoes too.

Where can you see active lava flowing in Hawaii?

aka the red stuff

The Big Island is known as THE island to visit in Hawaii if you want a chance to see active molten lava (aka the red stuff).

But, it’s not always guaranteed or possible to see it.

At one point, the Kilauea volcano on the Big Island HAD been erupting continuously for over 30 years (!). This is what made the Big Island the Hawaiian island to visit to see active lava flows.

But in May 2018, that stopped for over 2 years. This meant that there was no chance to see active lava flowing anywhere in Hawaii.

Then, in December 2020, active lava started visibly flowing again on the Big Island of Hawaii. There was a video that was posted to twitter by the US Geological Survey at that time.

Then later in 2021, it started again. And there were places you could go at night in Hawaii Volcanoes National Park to see the bright red glow of the lava.

There may or may not be a chance to see active lava when it’s time for you to go to Hawaii.

As your travel date gets closer, check the updates for the current status of the volcanoes and chance of lava viewing!

You can see OLD lava flows, and very distinctly the path these old lava flows took on the Big Island

Now, if it turns out that you can’t see active lava when you’re in Hawaii, initially this may seem disappointing when you see online all the pictures of the red lava. But if you have never seen lava, active or old, then it CAN still be exciting! (I think so anyway!)

See below for the list of Big Island lava fields!


Volcanoes in Hawaii: There was a time in December 2022 that 2 volcanoes were erupting in Hawaii Volcanoes National Park. This was a special occasion because even in the past few years, there was a quiet period where there was NO active lava to be seen anywhere in Hawaii. As the National Park Service says, it was the first time in nearly 40 years that TWO volcanoes were erupting in Hawaii at the same time! But what seems like nearly just like that, they stopped erupting. As it goes with volcanoes, things can change in an instant! So be sure to check National Park Service updates when your Big Island trip gets closer: What's going on with the volcanoes?

Spotted yesterday at #MaunaLoa – a lava boat rides the waves! On Dec 7, a lava boat was spotted floating down channel. Lava boats can form when portions of the cone or lava channel break away & are rafted downstream. Hot lava cools to its surface to create that smooth exterior. pic.twitter.com/D9gdoFolfq

Places to visit on the Big Island

Your first volcano experience can be before you even step foot onto the Big Island!

Based on your route, try to sit on the side that will allow you to see the lava fields on the Kona coast that are located just north of the airport.

For reference, I was sitting on the LEFT side on my flight from Oahu (Honolulu) to Kona. Of course, flight routes can change so you can’t always guarantee you’ll be on the side with the views you want to see.

This is a bonus of flying Southwest with open seating. Check in as soon as it’s possible and you can nearly guarantee a window seat!

Well of course it makes sense that if you want to see volcanic activity, you want to visit Hawaii Volcanoes National Park!

This is also one of the best spots to see vast lava fields. You will want to be sure to drive Chain of Craters Road. This will be a drive that will take you to the coast. Along the way you’ll past vast stretches of old lava flows. You can get out and walk across them too.

See more about these Hawaii lava fields: Drive the Chain of Craters Road

To explore more volcanic activity in the national park, you’ll also want to drive Crater Rim Drive, so you can make stops to see sulfur banks, steam vents, the trail of devastation, and the Thurston lava tube. Off of this road is also where you’ll find the start of Kilauea Iki Trail, a hike into a crater that used to be a lava lake. And be sure to stop by the Kilauea Visitor Center to look around at the educational resources there! (aka learn more about Big Island volcanoes!)

This is in a separate area from the main area of the national park.

Right near the main entrance of the national park (the Kilauea Visitor Center entrance), you will find Mauna Loa Road (google maps). This is a part of the national park that far less people visit. (Not to be confused with Mauna Loa Observatory Road, which also few people visit, but is located in another area of the Big Island, off of Saddle Road that cuts through the middle of the island.)

Mauna Loa Road will take you up the slopes of the Mauna Loa volcano, and you’ll pass by some old lava flows.

This is a one lane road in parts, and you’ll drive to a dead end, the Mauna Loa lookout.

From here, you can also hike on a trail as little or as much as you want, and you’ll see a unique landscape. (You can go far on the trail to make this a multi-day backpacking trip.)

You may end up driving by the Kekaha Kai State Park if you are staying in Kona and making a day trip up north to the Kohala coast maybe to a place like Polulu Valley.

Driving along the main highway will have you driving through vast stretches of lava fields on both sides of you, and for reference on a map, at one point you’ll be driving by the state park too.

And, there are many things that can make a visit to Kekaha Kai State Park a worthy volcano activity!

You can go to see the Kekaha Kai beaches that are dotted with lava rocks – Kua Bay, Mahaiula Beach, or Makalawena Beach.

And, you can get closer to the old lava flows in the state park too. (Next on the list!)

Getting to Mahaiula Beach means that you will be driving through lava fields and you will see the lava all around you – left, right, front, back!

Getting to Makalawena Beach can mean hiking across lava fields to see the lava all around you!

You will hike on a short trail to the coast to see lava all around you! You can see where lava meets the ocean… and a black sand beach!

In Hawaii, the sand gets its black color due to the volcanic activity from the lava.

So black sand beaches are more great things to see as part of your volcano vacation!

First, to get to the start of this trail you will drive past the Ocean View neighborhood and vast lava fields. You are also driving towards the coastline and it can feel like you’re driving to the end of the world! (And you will actually be in the southernmost area of the United States.)

Then the entire hike to your destination (the beach) you will be surrounded by lava fields all around.

It’s not as dramatic, but you can also see smaller lava fields if you do the Captain Cook hike to Kealakekua Bay or the beach hike to Honomalino Bay. (Pictured in order below.)

Also make a quick stop at Alanui Kahiko aka Old Chain of Craters Road so you can quite literally see where the old lava flows stopped right on the road.

This can be another quick stop. Leilani Estates was the neighborhood that was in the news a lot during the 2018 Kilauea volcano eruption. Not every home and road in the area was covered in lava, and with a drive to what’s now the end of Leilani Avenue, you can see where this lava stopped on the road.

Not all residents like tourists swarming their neighborhood so just be aware of this too.

Hike through a cave (lava tube) where lava flowed through

There are 2 cave entrances of the Kaumana Caves. It is worth going in a least a little bit on both sides. You can see clearly where lava flowed through.

But if you will be venturing to a point where you can no longer see the light from where you came, then it’s important that you’re prepared for a cave hike!

More lava tubes to see on the Big Island

Where to stay for your Hawaii volcano vacation

If lava fields excite you, then you can find a place to stay that overlooks vast lava fields!

Be sure to check out this lava lookout cabin.

And that’s a bit about where to see lava on the Big Island!

And for even more volcanoes in Hawaii, be sure to look into visiting Haleakala National Park on Maui and hiking into the volcano crater there!