If you are looking for just ONE hike to do when in Hawaii Volcanoes National Park on the Big Island, then the Kilauea iki trail just might be your hike!

You can hike across the floor of the Kilauea Iki Crater which means that you will be walking along what used to be a lake of molten lava! 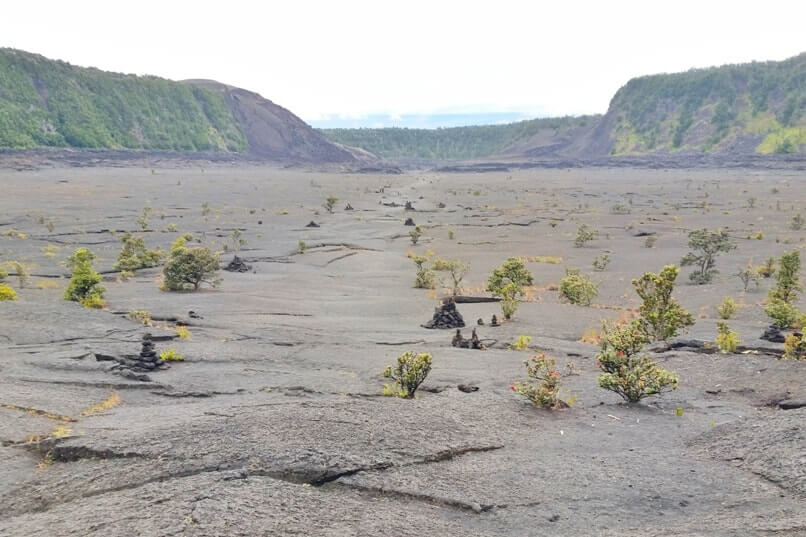 Descend through a lush rain forest to the floor of the solidified Kilauea Iki Crater lava lake.

Peer into the 1959 vent that erupted to a height of 1,900 feet located below the Puu Puai cinder cone.

For more on the geology of the Kilauea Iki crater and surrounding area, have a look at this official pdf guide.

So I would say definitely make this trail a priority what you are visiting Hawaii Volcanoes National Park.

But if you aren’t sure whether you want to do the whole thing or if you want to make it a shortened hike, you might want to save this hike as the last thing you do in the park. That way, you can judge the time better, and you can make it shorter or longer based on how much daylight you have left.

Even doing this hike as a shortened version can be worth it, I think!

If you already know how long you want to make this hike, then you can do it as you come across it on your drive through the park (it’s on one of the main roads that you are almost certain to drive along if you’re spending a day at the park), or you can do it on your way back at the end.

There are a few different ways you can hike the Kilauea Iki Trail:

1. Hike just a very short portion on the trail and see the crater from above

2. Hike down to the bottom of the trail so you’re looking at the former “lava lake” from ground level and then head back up 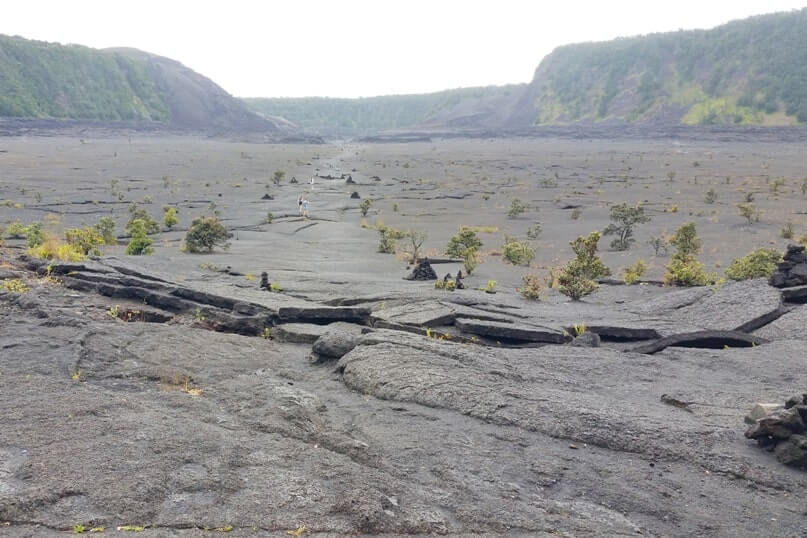 3. Continue hiking just a little bit along the crater floor before turning back around 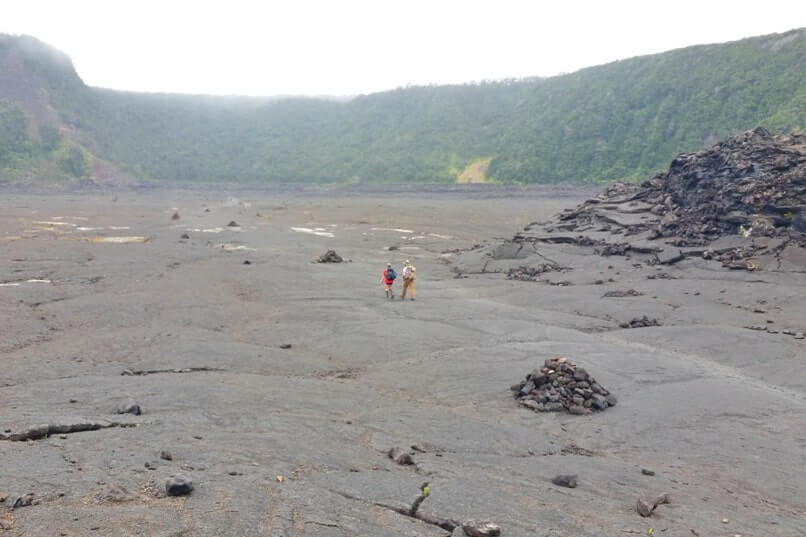 4. Hike the whole Kilauea Iki Trail as a loop trail!

So when I did this hike in early September 2019, part of the Kilauea Iki Trail was closed because of damage to the trail due to the 2018 volcano eruption. 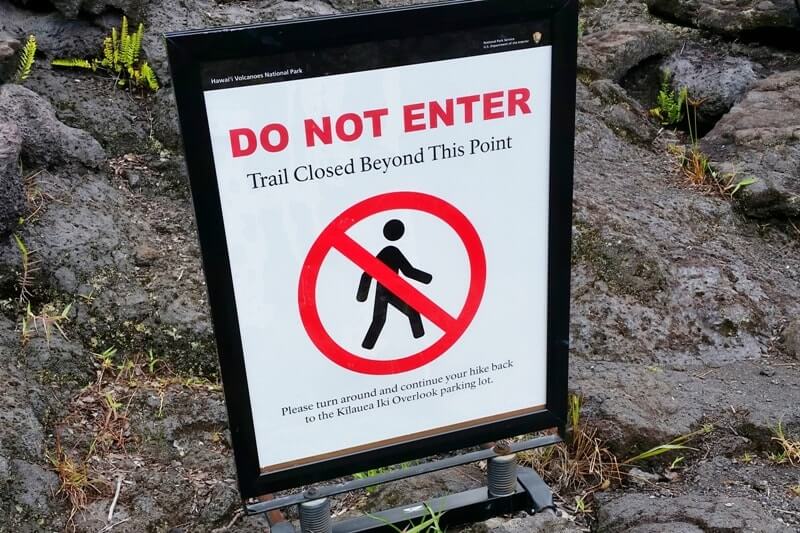 At that time, you could basically only hike across the crater floor to make it an out-and-back.

But, it seems as of the end of September 2019, the whole trail is open back up now, so you can do the complete trail as a loop!

This means that you’ll be able to also hike along part of the Crater Rim Trail as a part of the loop too, which means more views of Kilauea Iki from above as you hike.

The Kilauea Iki Trail is around 4 miles, and it’s officially recommended that you give yourself 2-3 hours.

During your visit to the national park, the two roads that you are almost certain to add to your one day Hawaii Volcanoes National Park itinerary are Crater Rim Drive (where you can see sulfur banks and “devastation trail“), and Chain of Craters Road (that will take you to the coastline as you drive through vast lava fields).

The parking lot for the Kilauea Iki trailhead is on Crater Rim Drive. You’ll see a sign for it as you’re driving. 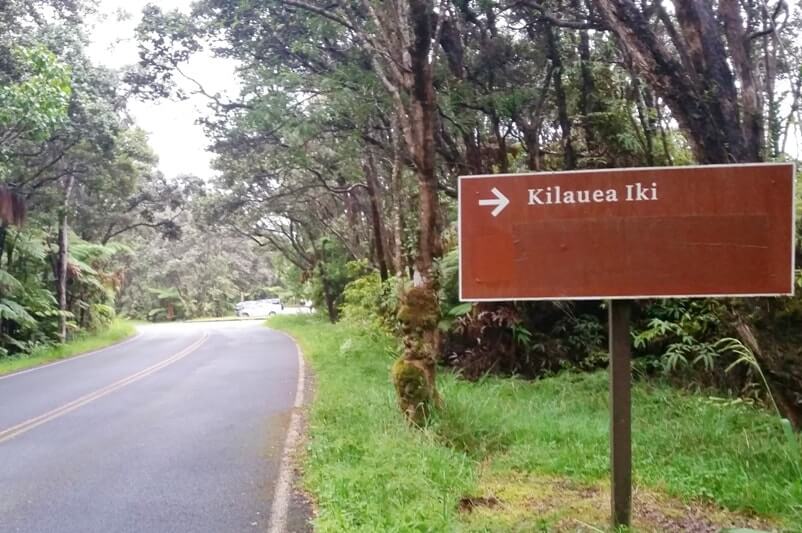 There is also limited parking further up ahead on Crater Rim Drive near the Thurston Lava Tube.

Important info about driving to the Kilauea Iki Trail as your FIRST activity at the national park!

If you are planning to do the Kilauea Iki Trail as your VERY first activity in the national park, as in you’re planning on driving straight there AS SOON AS you enter the park, then…

At the entrance of the park, you will want to get in the LEFT lane to pay for your park entrance fee or present your national park pass. 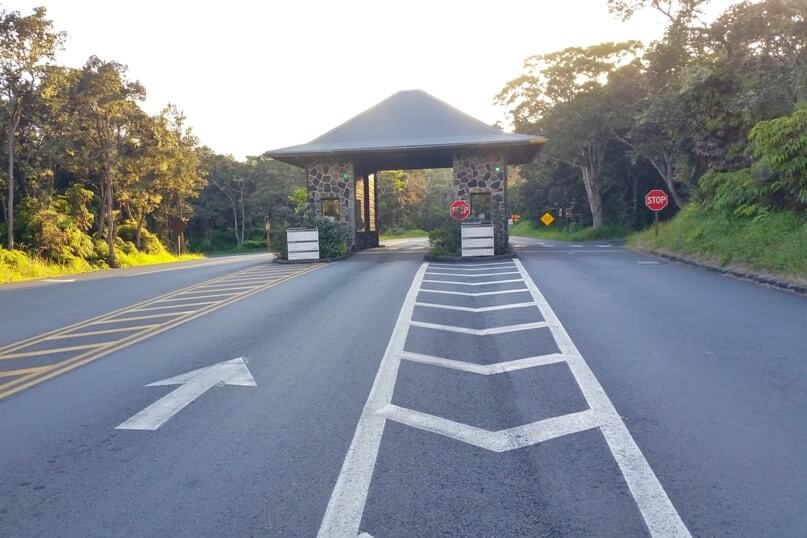 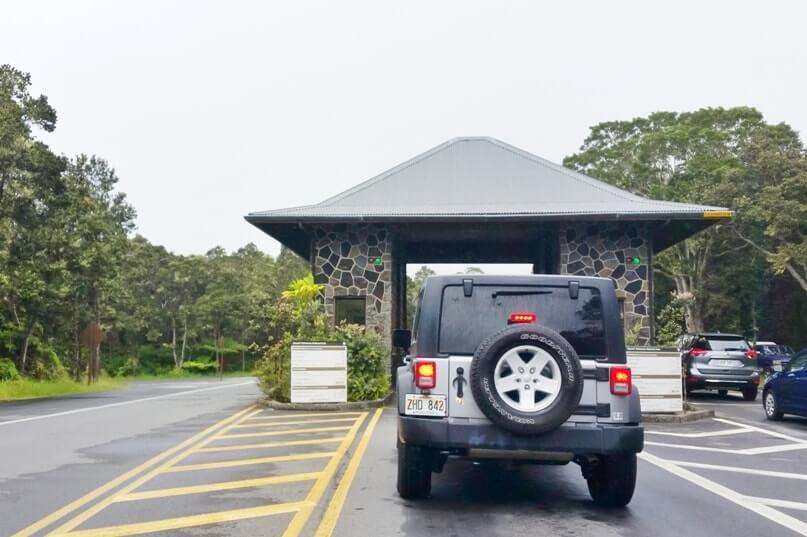 If you end up in the right lane it’s not that big of a deal, as you’ll likely just have to loop around and it’ll only take a couple extra minutes.

It seems that sometimes they might not make it possible to turn left here at all? But being in the left lane will allow you to just in case you can!

And, do consider stopping in the visitor center as the first thing you do in the park anyway! If you’re not offered/given a map at the entrance, it could be good to get a map at the visitor center that will tell you the current updates of what’s open and what’s closed. The volcanoes are active, so Hawaii Volcanoes National Park is always changing in terms of what you can see and what you can’t! The best way to know what’s going on TODAY is to stop by the Kilauea Visitor Center to talk to a park ranger! 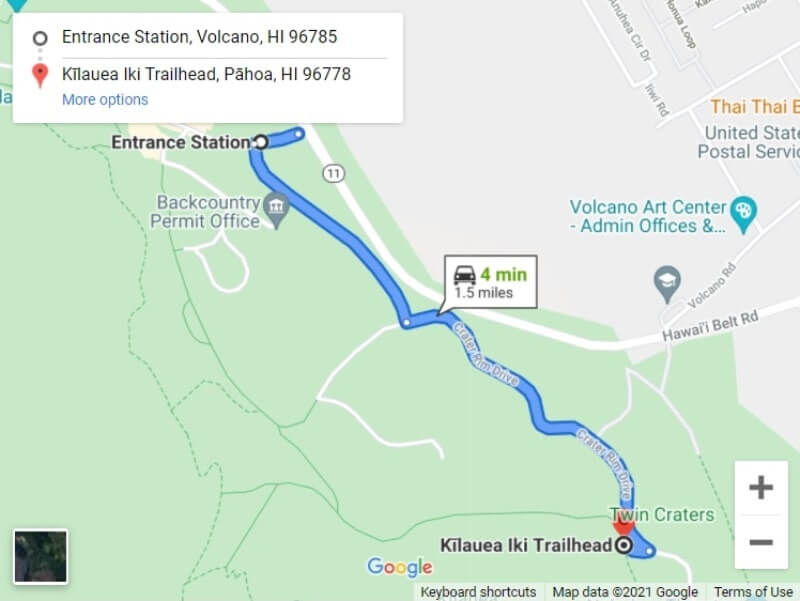 If you are one of these people that is going to be on a cruise to Hilo, then also see how far the top spots are from the Hilo cruise port!

For the Hawaii Volcanoes National Park pass only, it is around $30 for an individual pass per vehicle which typically lasts for 7 days. (There is no one-day pass.)

You can buy any of the passes at the park entrance when the entrance station is staffed.

And when you’re in Hawaii Volcanoes National Park, at least make a quick stop at the “old chain of craters road” so you can see quite clearly where lava just flowed over the road!

And for more lava-related experiences on the Big Island outside of the national park, be sure to have a look at doing the lava tube cave hike near Hilo! Also look at hiking to Makalawena Beach or hiking to Pohue Bay if hiking across vast lava fields sounds like your kind of Hawaii vacation!

A bit of what you’ll see on the Kilauea Iki Trail!

Again, I did this hike in September 2019 as an out-and-back. 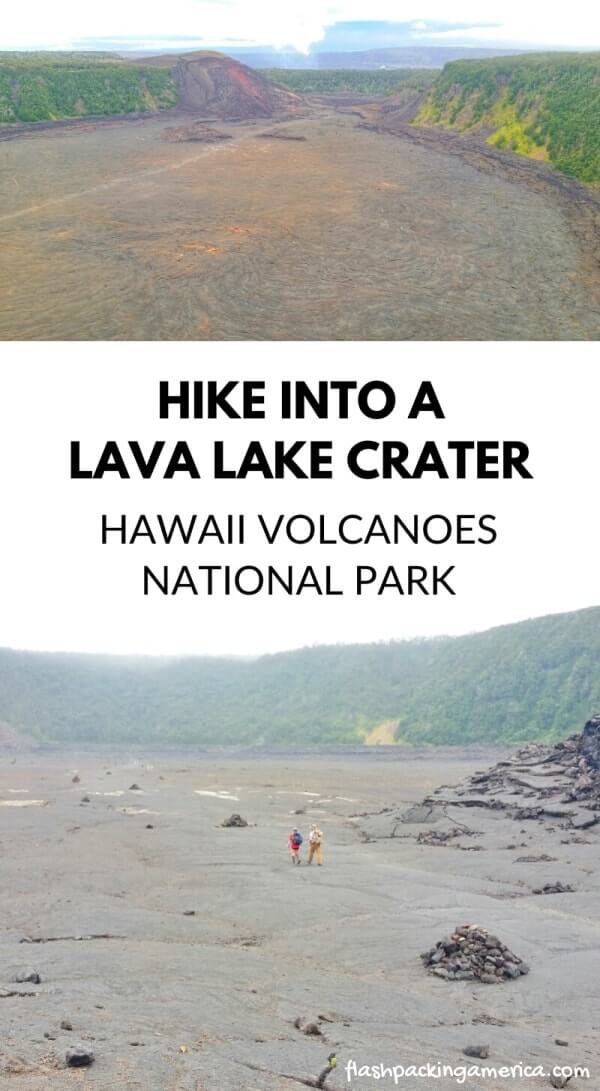 Most of the trail is pretty straight forward to follow.

From the parking lot, you’ll follow the signs. This will shortly take you on the trail through the rainforest.

You’ll then walk a short time on a dirt trail heading down towards the crater floor, also passing by an overlook to see that you’re getting closer to the bottom.

And then soon, you’ll see the opening at the bottom to see the crater floor aka the former lava lake!

Once you’re on the crater floor, you can follow the stacked rocks to stay on the trail. 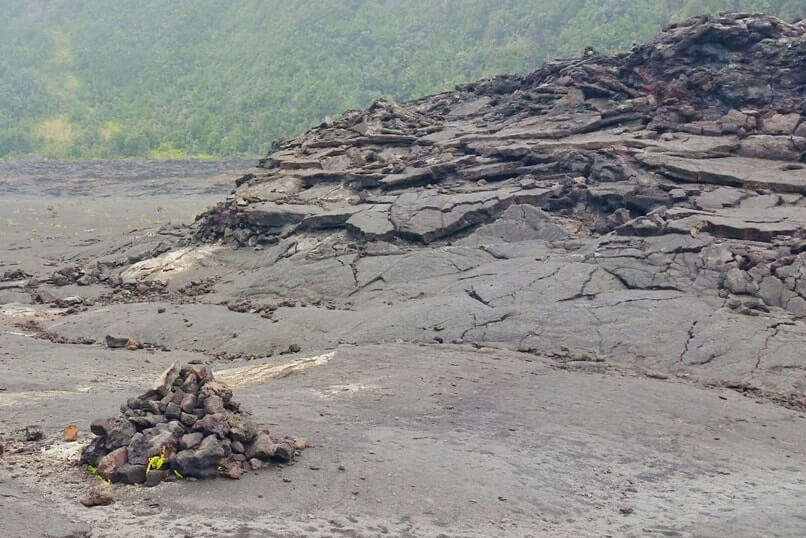 Walking across the crater floor can really get you thinking about the power of the earth! 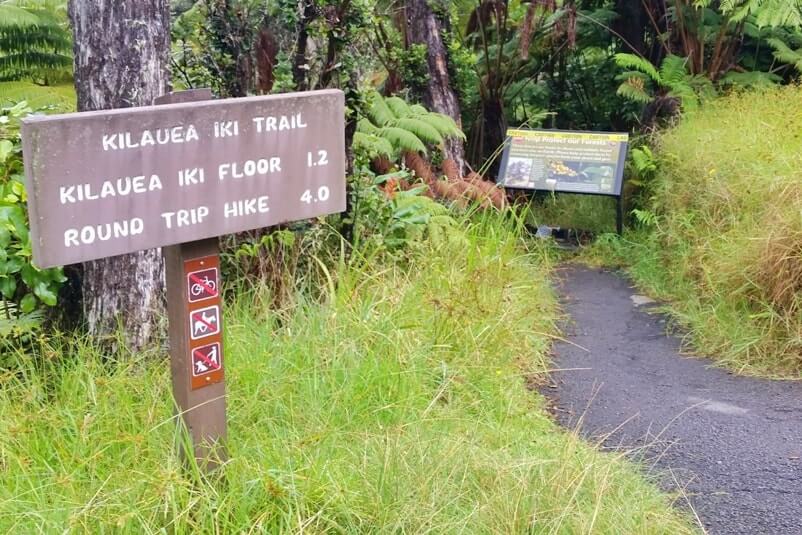 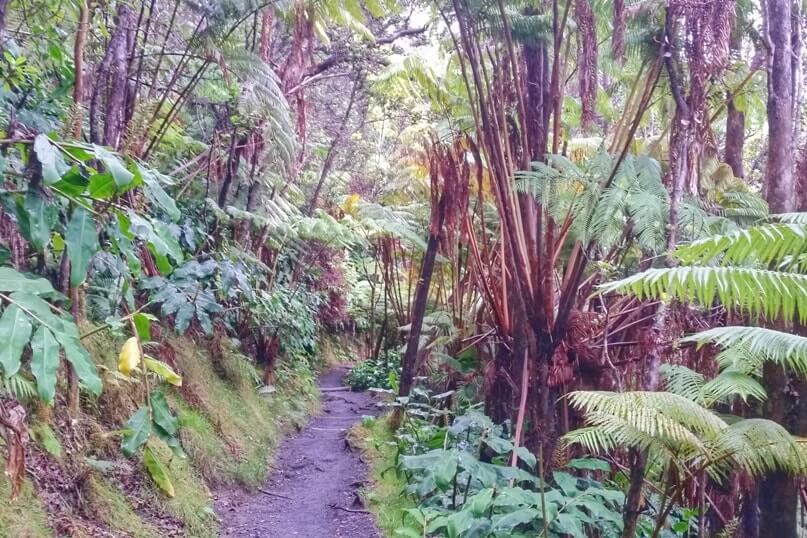 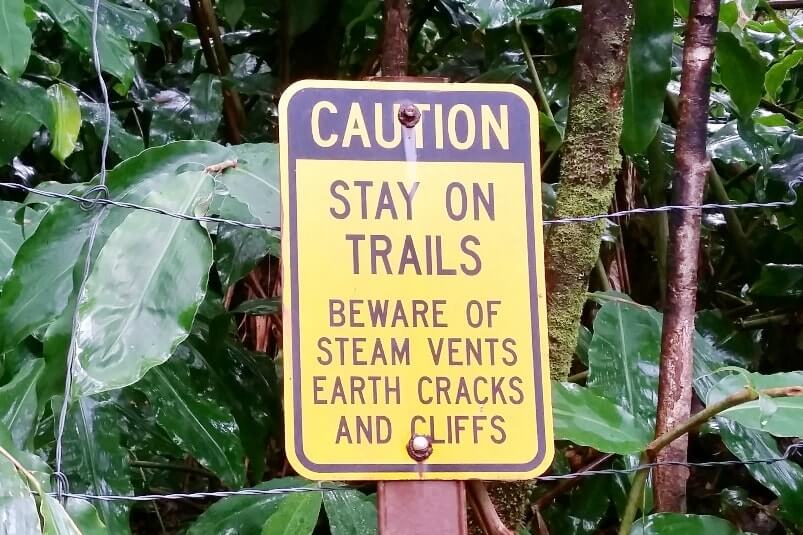 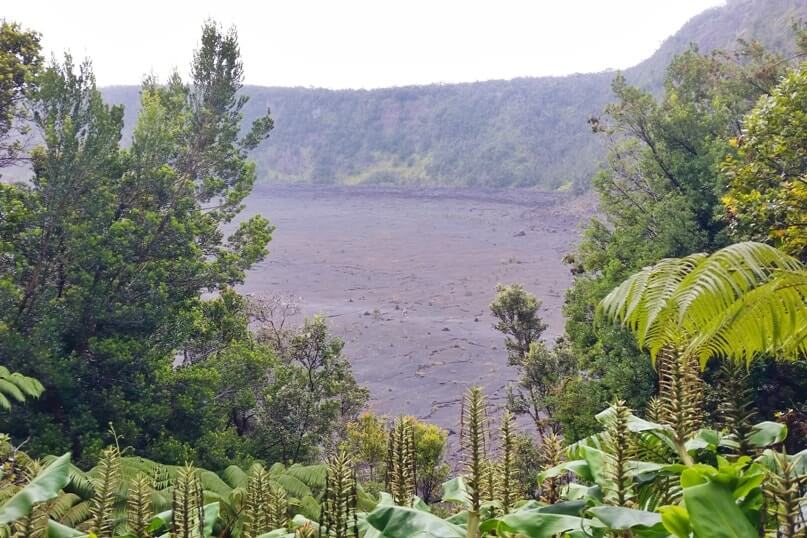 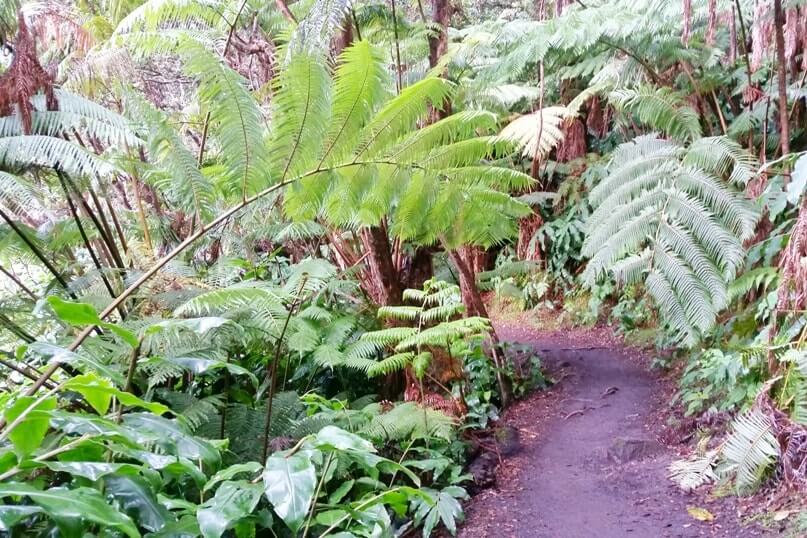 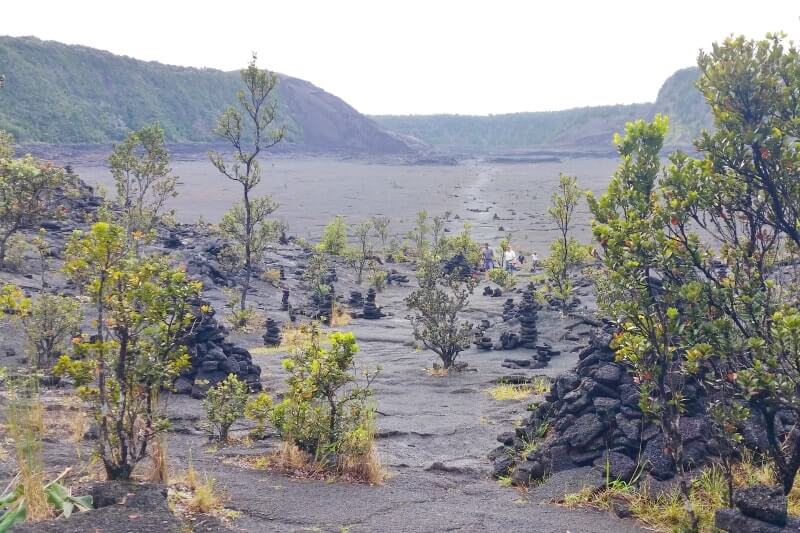 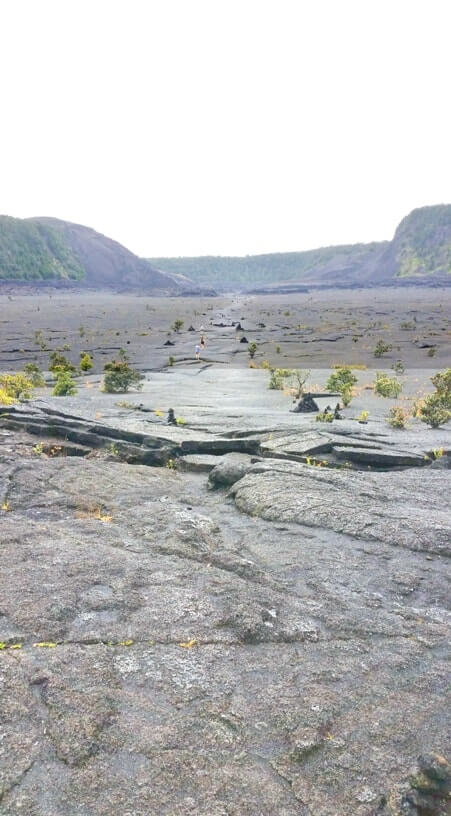 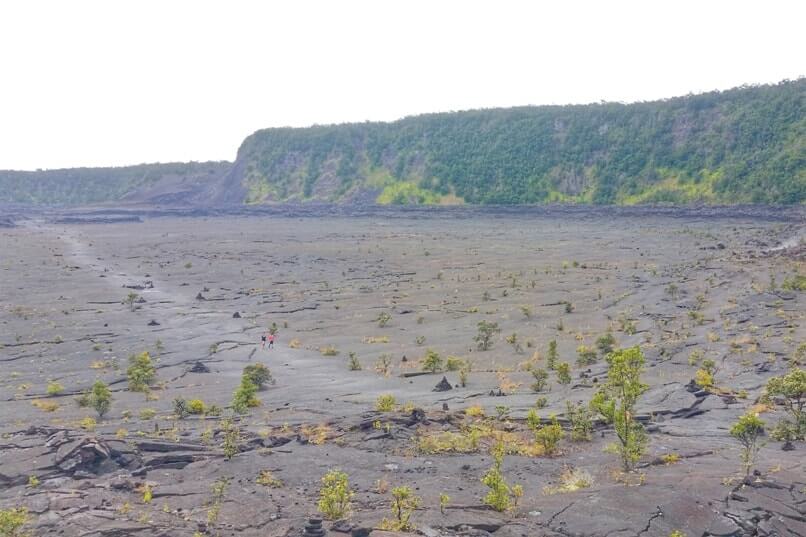 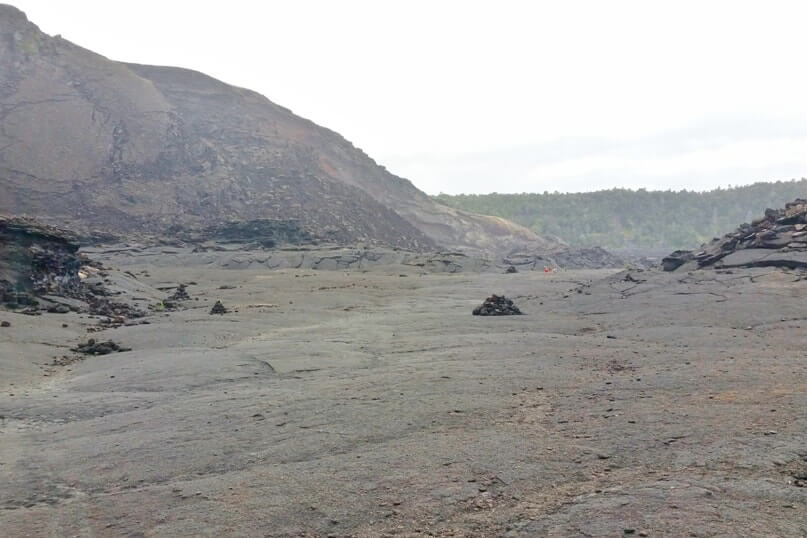 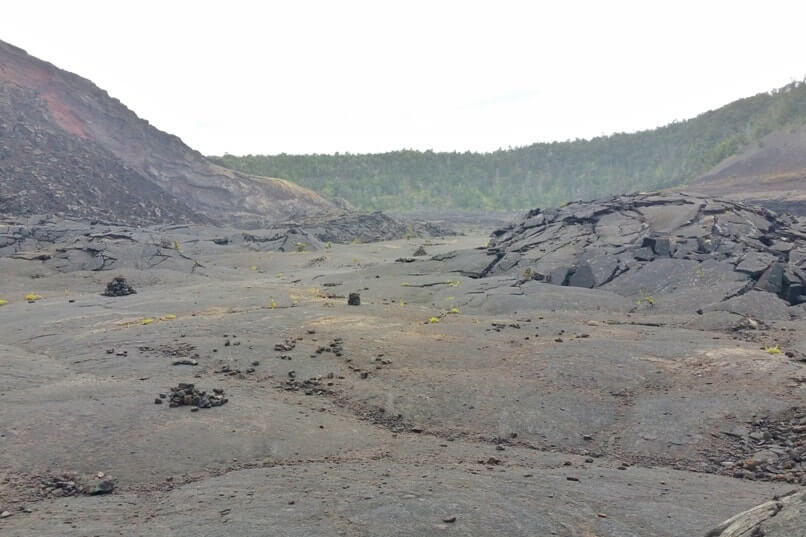 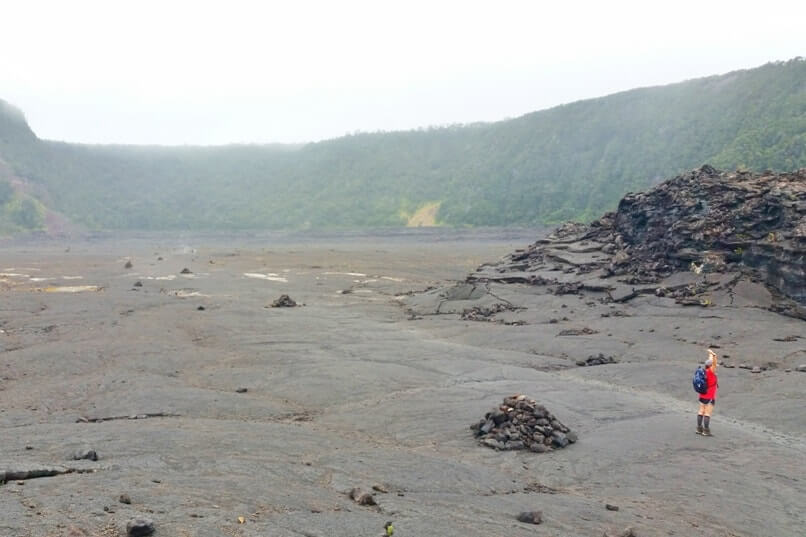 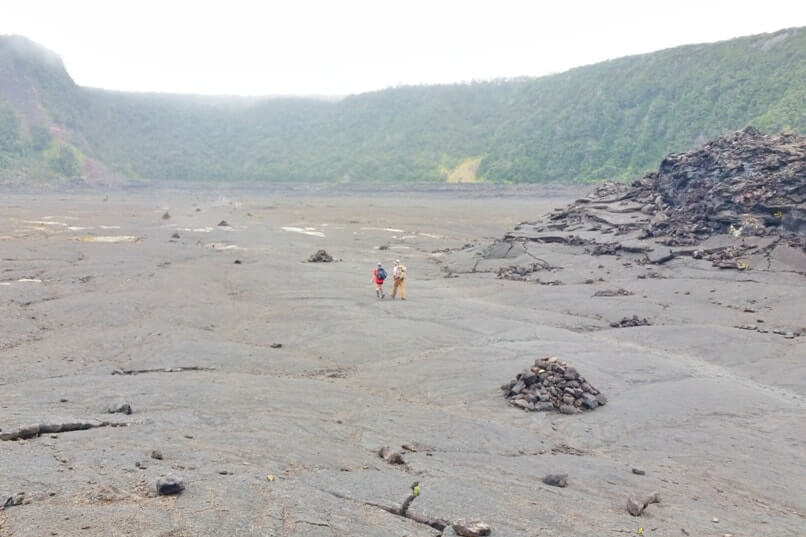 And that’s a bit of what it can be like to hike into the Kilauea Iki crater!

If you’re interested in learning about volcanoes, print off this pdf before you go so you can have a self-guided volcano hiking tour as you hike the Kilauea Iki crater! Or you could just read it now. 😉

So, what else to do at the national park while you’re there?!

There are 2 main things to do roads in the national park:

Chain of Craters Road is the road that will take you to the coast for a great scenic drive as you pass through lava fields. At the end of this road is the iconic Holei Sea Arch. 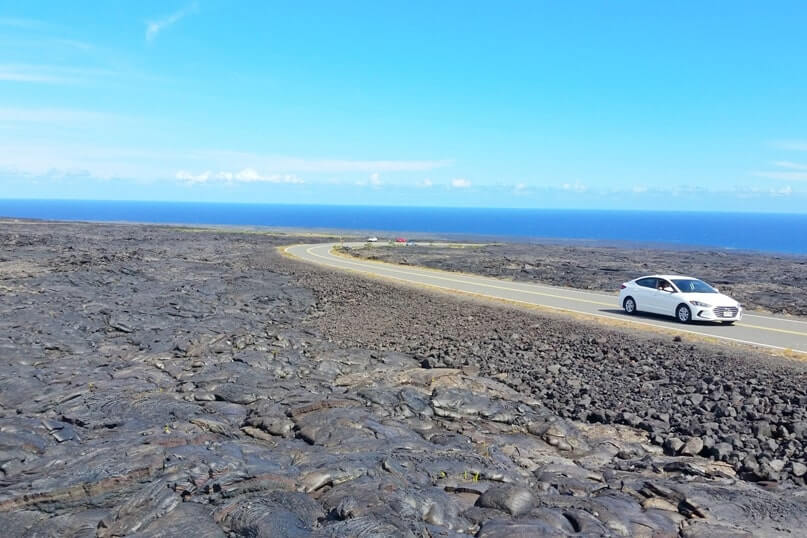 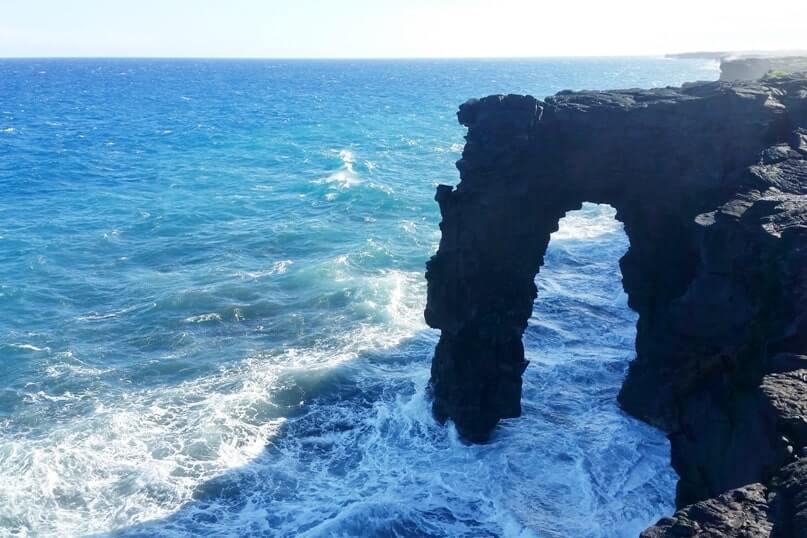 See more about planning your visit to Hawaii Volcanoes National Park and stops to make on your drive through the park!

And, if you’ll be driving from Kona, be sure to see things to do along the way on a drive from Kona to Hawaii Volcanoes National Park!

Also have a look at visiting the other national park in Hawaii on Maui! THE day hike to do at that Hawaii national park is a volcano crater hike with a volcanic desert landscape! 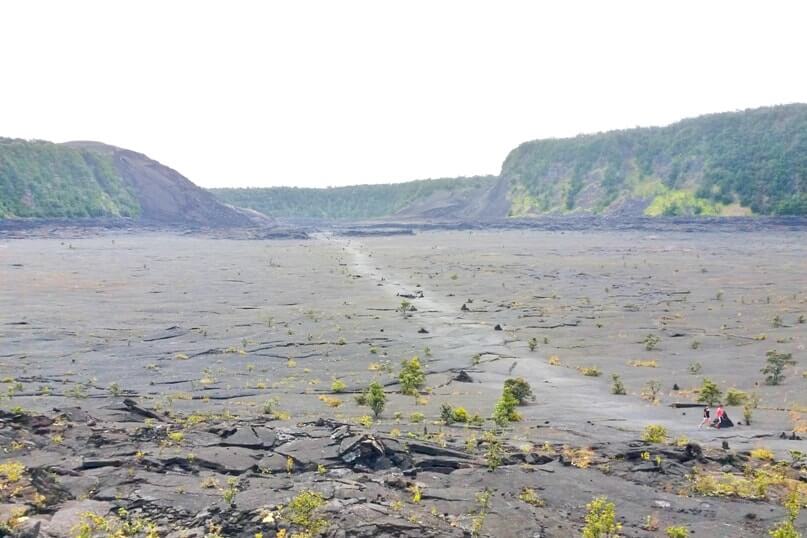