So Two Step Beach (aka Honaunau Bay) is considered to be one of the best snorkeling spots on the Big Island. 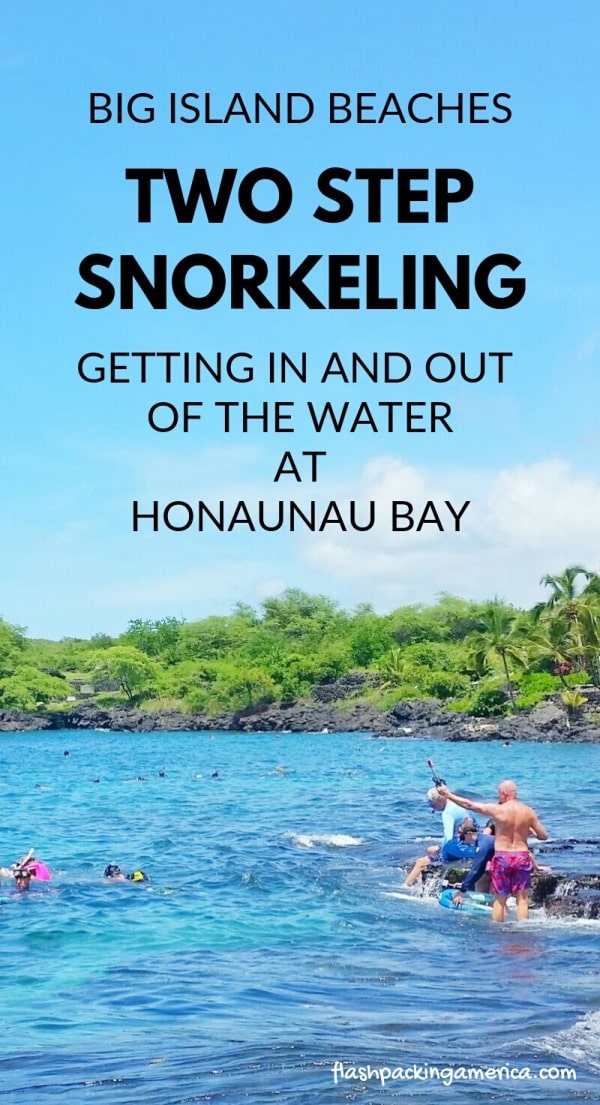 This is also one of the best snorkeling spots on the Kona coast.

And it can be paired perfectly with a visit to the Puuhonua O Honaunau National Historical Park (aka Place of Refuge in Hawaiian history) that is located a short walk from the snorkeling spot.

The snorkeling at Two Step isn’t in shallow waters so you’ll want to be comfortable with swimming or treading water.

If you want to get back to shore, it’ll either require stepping up on rocks or swimming back the long way to be able to walk out of the water normally.

Otherwise, I think this is a pretty beginner-friendly snorkeling spot for a first-time snorkeler, as you don’t need to go too far from shore to see a good amount of marine life.

There are no lifeguards here, and there are no proper beach facilities. There are porta-potties set up though.

There’s both free parking and a parking lot with a fee nearby.

Where to go snorkeling at Honaunau Bay?!

There are basically 2 ways to enter the water for snorkeling at Two Step.

1. The way that possibly requires some patience!

And then once you get in the water, you can swim pretty much anywhere in the bay!

I got in at the far left (facing the ocean, the national historical park side) and then swam all the way across to the other side and back.

Since I’m usually snorkeling alone, I don’t like to swim too far out, and there were plenty of fish to be seen!

Many people do venture out even further. Just watch out for the boats, since Two Step is a stop on many snorkeling boat tours.

More below about the snorkeling beach at Honaunau Bay! This includes the best ways to enter the water safely, and more of what the lava rock entry looks like too.

The beach at Honaunau Bay

So the first thing to know about Two Step beach is that it’s actually not much of a beach.

Although there is a small sandy area if you’re looking for it.

There are also some picnic tables, although not many!

The shoreline here is made up largely of lava rock aka old lava flows! 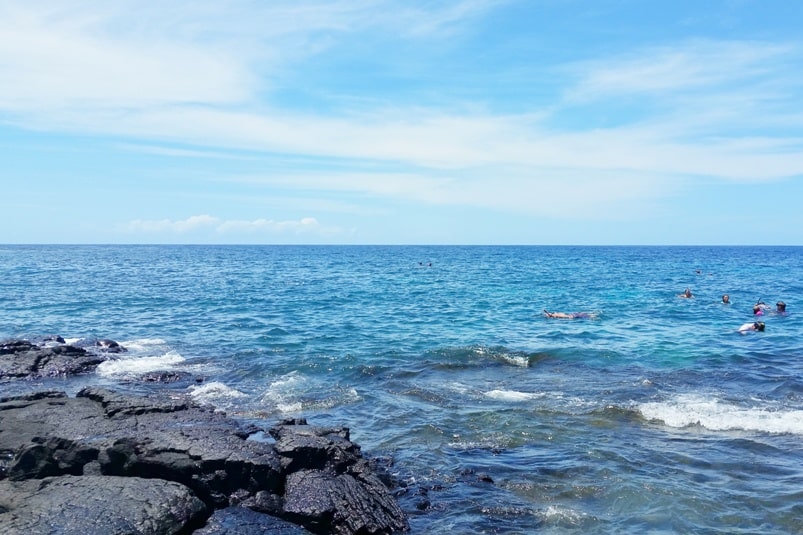 This can also make wearing water shoes here highly convenient if you won’t be wearing fins!

It can allow you to walk across the rocks, as well as get in and out of the water easier, with much more confidence. See more about water shoes for snorkeling.

Whether you’re going barefoot or wearing some sort of footwear, you’ll want to be careful as you walk across the rocks though.

Wet rocks can make for a slippery surface.

This is the entry into the water that might require some patience.

That’s because if there are waves crashing…

Then you’ll want to time it getting into and out of the water. 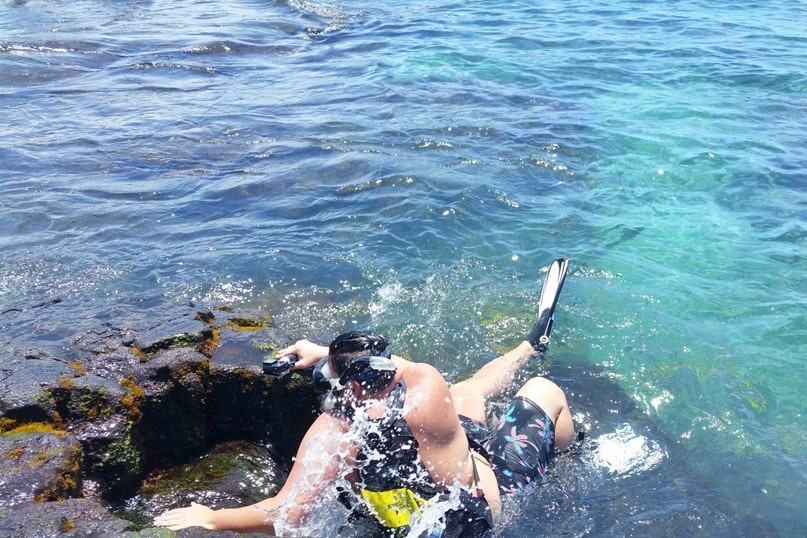 And even if there is relatively calm water affecting your entry and exit, you’ll still want to be careful as you step up and down on the wet rocks.

Once you get in the water at these entry points, you don’t have to go far to start seeing some underwater life.

You can then keep swimming around, including towards the side of the bay in the opposite direction of the national historical park.

If you don’t mind these rocky entrances, there are 2 officially recommended snorkeling “safe entry spots” on the lava rocks, one in the middle and one towards the right as you’re facing the ocean.

Apparently the sea urchins are poisonous! This is an even better reason to wear fins or water shoes in case you accidentally hit one or step on one.

You’re likely to see lots of sea urchins when you’re at many of the top snorkeling spots on the Big Island.

Well, I like things to be easy and I generally prefer a very low level of risk when it comes to stepping on wet rocky uneven surfaces and ocean waves pounding on me. 😉

So I got in the water the way in which you can basically walk into the ocean.

On the far left side when you’re facing the ocean (on the right side in pictures below), there’s a shallow sandy bottom area that you can walk right into the ocean. This is the national historical park side of the bay.

Sandy bottom also means no coral reef or sea urchins to step on at entry point!

And then right next to that small beach entry, there’s also a pier thing that juts out into the ocean that will give you a gradual walk into the ocean. This seems to be the canoe launch area. 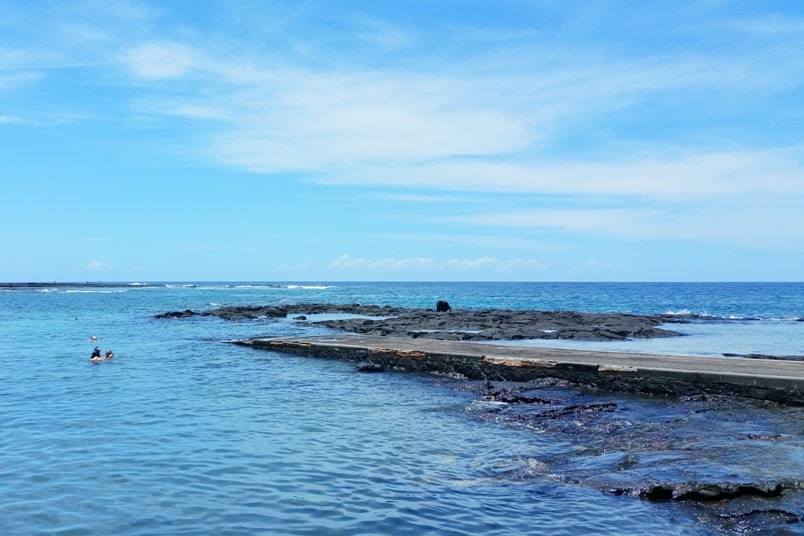 I did find this immediate side of the bay to have less fish, so it does require a bit of extra swimming to get to the more abundant area of underwater life. (Which is basically where the rocky entrances are.)

And that’s a bit about the snorkeling entry spots at Two Step!

Swimming with dolphins at Honaunau Bay

I personally didn’t see any dolphins when I was at Honaunau Bay (maybe I didn’t go out far enough), but apparently this is one of the areas that you might be able to see some dolphins on the Big Island.

If you do see dolphins, just observe, though!

And that’s a bit about a trip to Honaunau Bay!