How common are shark attacks in Hawaii?!

Just how much of a danger are sharks to tourists?!

Well, sharks attacks in Hawaii are said to be rare, but they do happen.

Deaths from shark attacks are even more rare, but again they do happen.

As of June 2021, the last fatality from a shark attack in Hawaii was in December 2020. That shark attack death took place off of Maui, and it also caused an area surf competition to get postponed.

Prior to this December 2020 fatality, officially, the last death from a shark attack in Hawaii was in May 2019 on Maui. Unofficially, it was possibly October 2019 on the Big Island. (More on why it’s “unofficial” in a bit.)

How many shark attacks were there last year?

Officially there were 6 shark victims in Hawaii recorded in 2020.

These Hawaii shark attacks in 2020 happened on the Hawaiian islands of Maui, the Big Island, and Kauai:

Of these in 2020, there was 1 deadly shark attack on the island of Maui. This fatal Maui shark encounter happened to a surfer at Honolua Bay in West Maui. 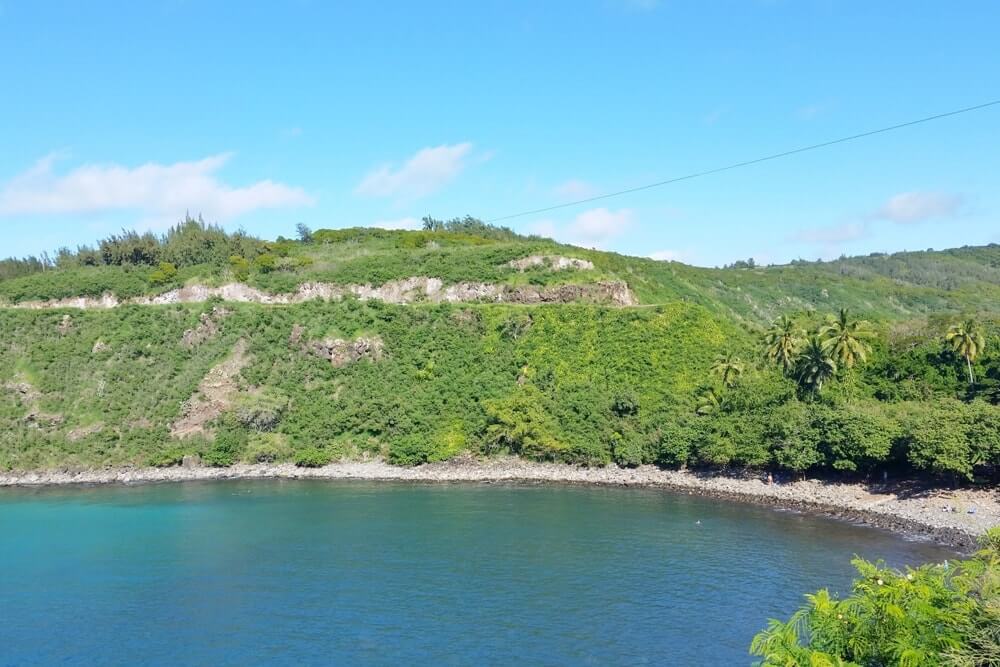 Honolua Bay is part of a marine life conservation district on Maui, and it’s known for good snorkeling.

Honolua Bay is also a popular spot for Maui surfers to find waves. (And it’s been known to make lists of the best waves in the world.)

It was reported that the December 2020 Maui shark attack victim was a recreational surfer paddling out. (Photos below of a common spot to enter the water at Honolua Bay.) 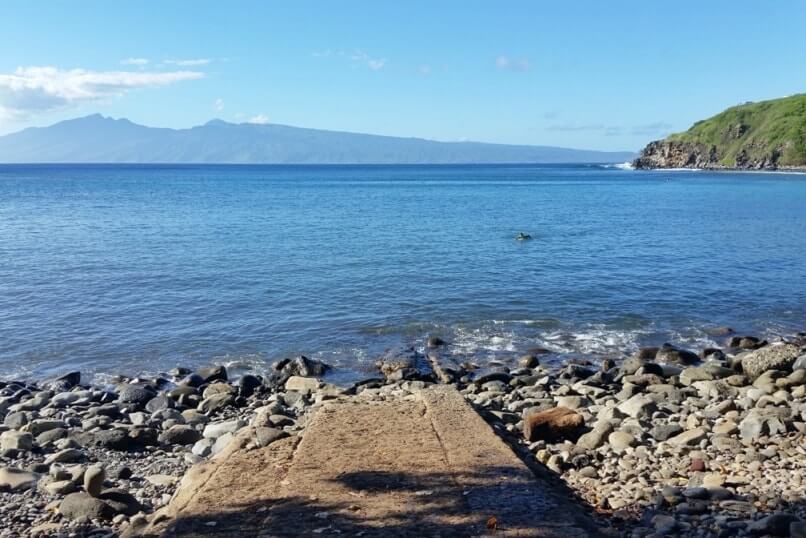 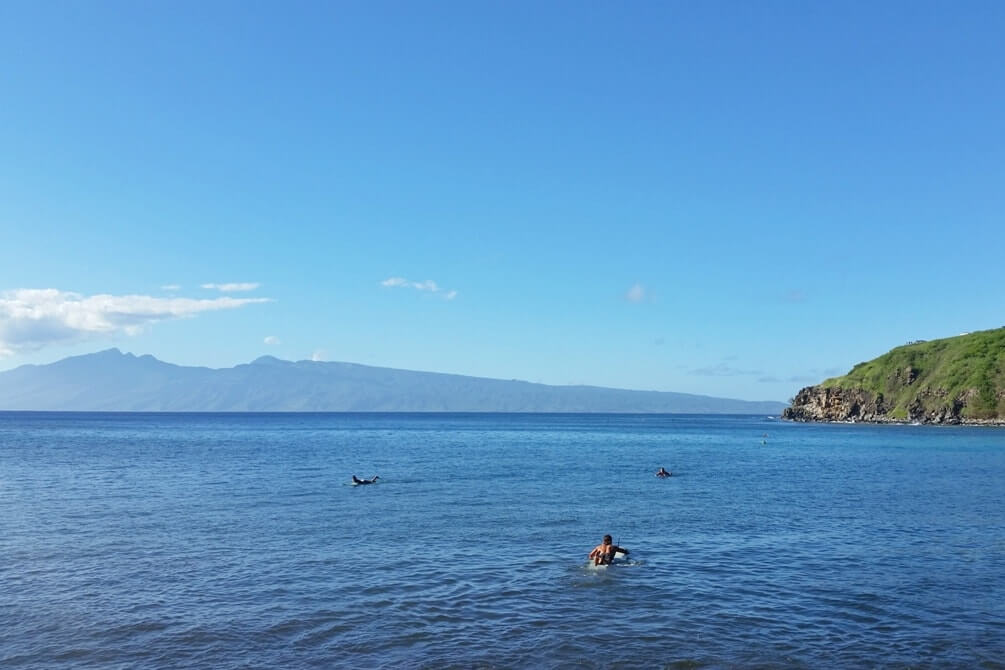 How many shark attacks were there in 2019?

Officially there were 14 shark attack victims in Hawaii recorded in 2019.

These attacks happened on all major Hawaiian islands:

And there were 3 more attacks in the channel area between the Hawaiian islands of Oahu and Molokai.

Of these in 2019, there has been 1 deadly shark attack officially recorded. This fatal shark encounter was on Maui. This also happened along the shores of West Maui.

There are shark tours in Hawaii

Yes, swimming with sharks is a thing, and you don’t have to be a professional to do so. You can go on a shark diving tour in Hawaii.

Have a look at the shark diving reviews for swimming with sharks off the coast of Oahu.

“Hey mom, I got bit by a shark, I need you to come pick me up.” Actual quote from a shark bite victim.

You need to watch the video below. Perspective!

How many deadly shark attacks have there been in Hawaii?

And it’s not official as the body hasn’t been found, but there was possibly one more deadly shark attack on the Big Island in 2019. It’s believed that a diver reported as missing was attacked by a shark. Clothing found was said to be consistent with shark bites.

Scientists say it’s not a coincidence that Maui sees more shark attacks. They say Hawaii sharks like the ocean environment of Maui’s shores. Read about it.

How many shark attacks have there been in Hawaii in the last 5 years?

And if you’re on a shark attack research binge, there is also an International Shark Attack File of unprovoked shark incidents around the world. There’s an interactive map.

Locations of Hawaii shark attacks in 2019

Incidents listed below are as reported by the Hawaii state government.

Covered below about sharks in Hawaii making the news:

Makaha Beach is on the west side of Oahu which is not one of the major tourist-frequented parts of Oahu.

The shark bit off a piece of a surfboard while the local surfer was left uninjured. Read the news story.

Haleiwa is on the North Shore, which is a popular tourist area.

Both Haleiwa incidents didn’t seem to occur near any beach, and instead happened a few miles off shore.

The details of the May incident are a bit lacking, but officially it’s considered a provoked incident.

In September, 1 or 2 sharks attacked 3 people around the same time on the same boat tour around 3 miles from shore. This seemed to be a tour that advertises swimming with sharks so it is also considered to be a provoked incident. Read the news story.

Kaiwi Channel (between Oahu and Molokai)

The other 3 shark attacks listed as taking place on Oahu happened in the Kaiwi Channel.

This is officially listed as an Oahu shark encounter, but it’s a channel that’s between Oahu and another Hawaiian island, Molokai.

All of the attacks in this channel happened are listed as happening around 11-12 miles off-shore, so doing normal tourist activities wouldn’t have you near the Kaiwi Channel where the shark attacks occurred.

See the video below of (not intentionally) swimming with sharks in the Kaiwi Channel in 2016.

Side note! If you’re headed to Oahu, see how to spend 3 days on Oahu, along with the best snorkeling spots and best white sand beaches and best beaches on the North Shore.

The Kaanapali area is known as having among the best beaches on Maui. It’s a popular hotel and resort area in West Maui.

And it’s in this area that a deadly shark attack occurred, around Honokowai Point. He was a visitor from California with a vacation home on Maui. Read the news story.

There was a shark attack in this same general area of Honokowai at the end of November 2020. It is being reported as happening off the shores of Mahina Surf Condos, with shark warning signs posted “from Kahana Village Vacation Rentals to Papakea Resort” (map). Read the November 2020 news story.

There was a shark attack in Honolua Bay, which is also West Maui, just a bit further up the coast from Kaanapali, just past Kapalua. This is the deadly Hawaii shark attack in 2020. Read the December 2020 news story. Honolua Bay is a part of a marine life conservation district on Maui and is considered one of the top snorkeling spots on Maui. The area of Kapalua also has a number of good things to do for tourists.

Both of the Kihei shark bites are listed as happening about a half mile north of Kalama Beach Park, which is the north side of South Maui. In both cases, there were no injuries reported, just boards being bitten.

While South Maui is another resort area, the main resort area is a bit further south in the Wailea area. Still, Kihei in general is somewhat of a tourist area.

That said, one of the 2020 shark bites is reported as happening around Wailea, with a paddleboard being bitten. It was also reported that “at least one shark had been aggressively following a group of stand-up paddleboarders who attempted to fend it off with their paddles.”

Side note! If you’re headed to Maui, see this jam-packed 3 day itinerary! Maui is home to Hawaii’s famous red sand beach. Also be sure to see the dangers of Maui’s popular tide pools before you go.

Shark attacks on the Big Island

All of these attacks happened on the Kona side of the island which is the side where most tourists stay.

Anaehoomalu Bay is also a tourist-frequented area, as it’s where one of the top resorts on the Kona side of the island (and the Big Island) is located.

It was reported that the attack happened in the area of Waikoloa Beach Marriott Resort.

The victim’s leg was also reported to be “stitched and stapled back together.” Read the news story.

Kailua-Kona town is among the most popular tourist areas of the Big Island, but the shores off the town area generally aren’t considered a popular swimming area although there are a few beaches.

Notably, there is Kailua Bay, which is the location of the swim start of the Ironman triathlon world championship. The shark attack is thought to have happened just south of Kailua Bay.

The possible deadly shark attack that isn’t on the official list of shark incidents (because it’s a missing person) is thought to have happened near Kailua-Kona town.

It seems a diver went for a solo night dive and went missing.

His truck was found in Kona. It was reported that “search-and-rescue divers recovered clothes and equipment, which were found in ‘shredded’ condition” which is said to be consistent with shark bites. Read the news story.

Hanalei Bay is known as one of the best beaches on Kauai.

And it’s around this area that the shark attack happened. Read the news story.

And that’s a bit about sharks in Hawaii, which is one of the dangers of swimming in Hawaii.

If you’re headed to the Hawaiian islands for your first trip to Hawaii, it’s important to be aware of the many natural dangers that Hawaii has!

Just like shark attacks, there have been many people, including tourists, who have seriously injured themselves and/or died from activities related to tide pools, waterfalls, and hiking.

So it is important to be aware of the dangers of any place you visit in Hawaii. It may not be possible to eliminate risk completely, but it is possible to lower your risk just by being aware!

If you’re traveling to Hawaii alone, see tips for solo travel to Hawaii.

HAVE A SAFE BEACH VISIT HOPEFULLY WITHOUT SHARKS IN HAWAII! 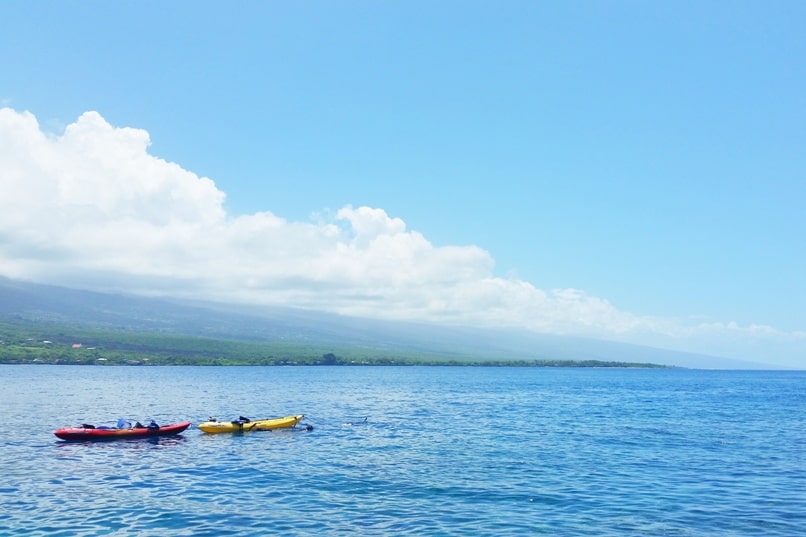 For a Hawaii experience you are sure to remember, get out on the open water to sail the ocean!

Look for the reviews!