So you want to go to the east side of Oahu as a part of your time on the island!

Some of the best beaches in Hawaii can be found in this area!

So then, which are the best Oahu beaches that are on the east side of Oahu aka the windward coast of Oahu?!

First, the quick list of the top 5 beaches on Oahu to know about when you’ll be making your way to windward Oahu.

Then, a bit more about each of these beaches, including some nearby places you might want to go when you’re in the area!

These can be among the best things to do on Oahu, and you can work a trip to the windward coast into your 3 day Oahu itinerary!

5 best beaches on the east side of Oahu

aka best things to do on windward Oahu!

Go here for possibly the most popular snorkeling spot on Oahu.

Go here for a picture perfect white sand beach, along with views of the famous twin islands… the Mokes!

Go here for one of the best beaches on the east side of Oahu with beach facilities.

Go here for a white sand beach on Oahu that gets less tourist visitors.

Go here for boogie boarding and to visit another beach that gets less tourists.

More below about what to do in East Oahu near each of these beaches!

More photos/info below, but first...
Side note!
Here's some info on Oahu trip prep!

There are affiliate links on this page.
You can read reviews for the best Oahu tours.


If you can't see the video directly above, save the Oahu video playlist to watch on youtube later!

IMPORTANT!!! If you have plans to do the Diamond Head hike, be sure to check the Hawaii State Parks website before you go. As of May 2022, you must make reservations for Diamond Head.

Free things to do on Oahu:

A little more about these top east Oahu beaches!

…aka the best things to do on windward Oahu!

Hanauma Bay is located at the southeastern point of Oahu.

This is one of the most popular spots for snorkeling on Oahu, so if you want to get some good snorkeling in when you’re in Hawaii, this is one spot to consider.

It’s a pretty easy drive to get here from Waikiki.

There used to be a direct bus to Hanauma Bay.

You can still get from Waikiki to Hanauma Bay by bus if you don’t mind a lot of walking with your beach gear. It’s a 20 minute walk from the bus stop to Hanauma Bay.

But there’s local food near the bus stop to make up for your effort!

The bus stop you’ll get off for Hanauma Bay is near Koko Marina Center, which is where you can find local food like malasadas at the Leonard’s Bakery food truck or a Hawaiian plate lunch at Fatboy’s. (map)

IMPORTANT!!! The cost to visit Hanauma Bay has gone up recently so be sure you are getting the most accurate cost info before you go. Check current entry fees from the County of Honolulu.

Things to do near Hanauma Bay

This hiking trail has also been called nature’s stairmaster because the hike is basically a whole bunch of stairs to reach the summit of Koko Crater.

But there are amazing views waiting for you at the top which could make it worth your effort!

This crater is basically right across the street from Hanauma Bay.

So, it could be perfect to go to for the hike that’s sure to get you sweating, and then cool off with a nice recovery of swimming and snorkeling at Hanauma Bay!

For picture perfect beach views, Lanikai Beach can be one of the best beaches on Oahu!

It has even made the list of one of the best beaches in the world by a number of publications.

This is also where you can go to see the famous twin islands of Oahu, aka the Mokulua islands aka the Mokes.

One of the negative parts of going to this beach though is that parking can be a struggle.

So if you don’t mind a little extra activity…

Or you might consider renting a bike in Kailua and then biking over to Lanikai Beach.

Another down side of Lanikai Beach is that there are no proper beach facilities here.

Things to do near Lanikai Beach

Once again if you like working for stunning views…

You can make this into a longer hike or a shorter hike.

For the longer hike, it can be a point-to-point hike basically making this a ridge trail as you walk along the mountain range. (Of course, you can also make it an out-and-back hike!) You can consider this the full Kaiwa Ridge Trail.

Either way, you’ll get those amazing views of the Mokulua Islands from above!

Another one of the things to do near Lanikai Beach is to go to Kailua Beach!

Kailua Beach might be a bit more convenient than Lanikai Beach in many ways, because of the parking situation and beach facilities.

As a proper beach park, Kailua Beach has a parking lot, bathrooms, showers, and lifeguards on duty too.

Things to do near Kailua Beach

It’s possible to go kayaking from Kailua Beach as a guided kayaking tour, or you can rent the kayaks and head to the Mokes on your own.

Getting around Kailua town by bicycle can be a fun little thing to do!

You can also take the bikes and head to Lanikai Beach, too!

This is a beach that doesn’t get as many tourists as some of the other beaches on Oahu.

So there might be a better chance that you can get a little bit more of a quieter beach experience if you go to Waimanalo Beach.

If you’ll be driving to Kailua or Lanikai, you can make Waimanalo be on the way from Waikiki if you make it a drive along the coast (as opposed to an inland drive). So you could stop to check it out along the way!

Makapuu Beach is another beach that doesn’t get as many tourist visits as other beaches on Oahu.

This beach might have a bit rougher waves as it can also be considered a good beach for boogie boarding.

You can buy boogie boards in Waikiki at the ABC convenience stores for like $20.

The rougher waves also means that you’ll want to be careful a bit more here!

Things to do near Makapuu Beach

This is a paved coastal trail that will offer you stunning views nearly the entire way!

If you’ll be on Oahu during whale season, it could be a good place to try your luck for spotting whales from far away.

There are binoculars on the trail for you to attempt to spot whales.

Generally speaking the best time for whales on Oahu is considered to be January through March, although the season in which whales visit Hawaii are said to be from November to May.

But even if you won’t be on Oahu during whale season, the ocean views will always be there!

Waikiki to the east side of Oahu

Because Waikiki is a bit of a distance from the east side of Oahu, going by car can be the most convenient.

Driving time from Waikiki, although always dependent on traffic, will generally be:

But even if you won’t be driving when you’re on Oahu, you can find a bus to go to that side of the island.

You will just want to make sure you have time and patience though, because the buses aren’t as frequent.

Google Maps is good for giving you a general timetable for buses on Oahu – just type in the starting point and destination, and then select public transportation as your method of travel!

See more about taking a bus from Waikiki.

And those are some of the best beaches on the east side of Oahu to consider making a part of your trip to Hawaii!

Also see more of the best beaches around Oahu.

And also the best of hiking on Oahu. 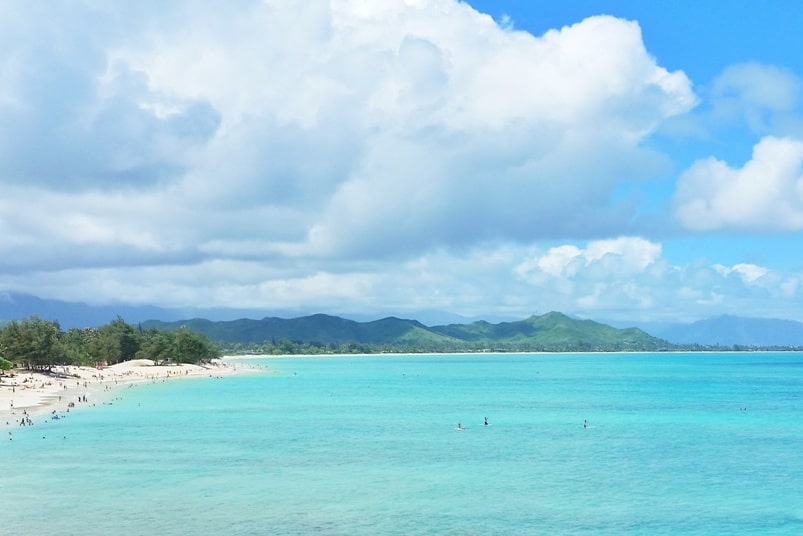 Are you headed to another island in Hawaii from Oahu? More of the best things to do in Hawaii: