OAHU BUS: Getting around Oahu by bus 🚌 HOW to do Honolulu Oahu without a car on a budget 🌴 Hawaii travel blog

You’re headed to Oahu on a budget and you’re looking to save some money on your trip to Honolulu!

Is there public transportation on Oahu?!

Oahu does have a bus system that goes around the island.

This means that if you don’t want to rent a car, it IS possible to get to some of the top spots on the island of Oahu without a car. 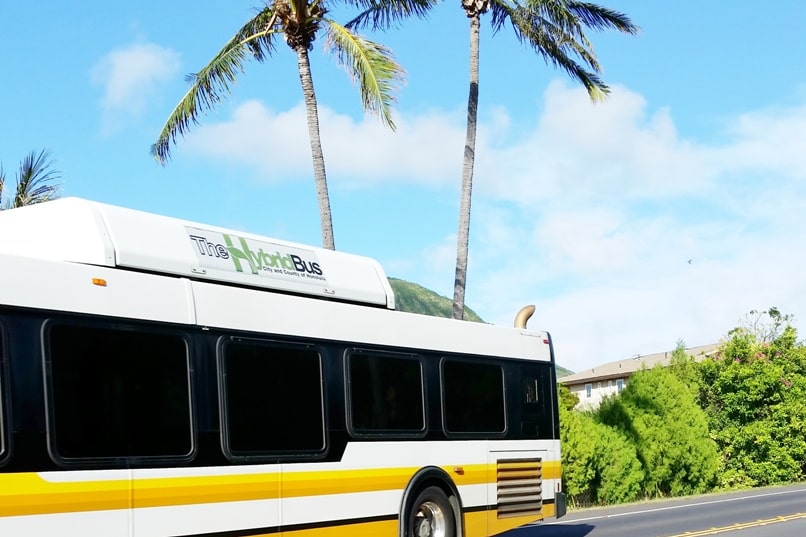 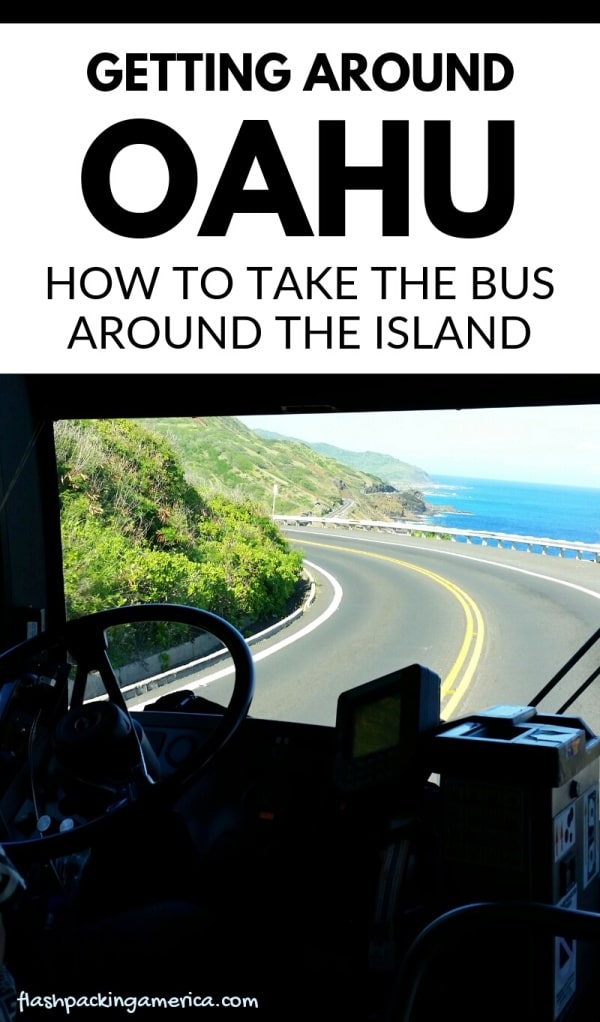 Of course, taking the bus as your mode of transportation around Oahu means that it will take longer to get to places compared to a rental car.

Just know that that taking the bus, especially over longer distances, requires TIME and PATIENCE.

With the frequency of bus timings less on some parts of the island, it could require some extra waiting time.

But as long as you’re mentally prepared for this, then the bus is no problem!

Consider that you are experiencing slow island life. 😉

Or, you can opt to take a bus to the places that are relatively close to where you’re staying.

Then maybe you can rent a car for a day or two to head to other parts of the island in order to save time on transportation.

But when you’re going around the island, even the bus ride to get there will be scenic! 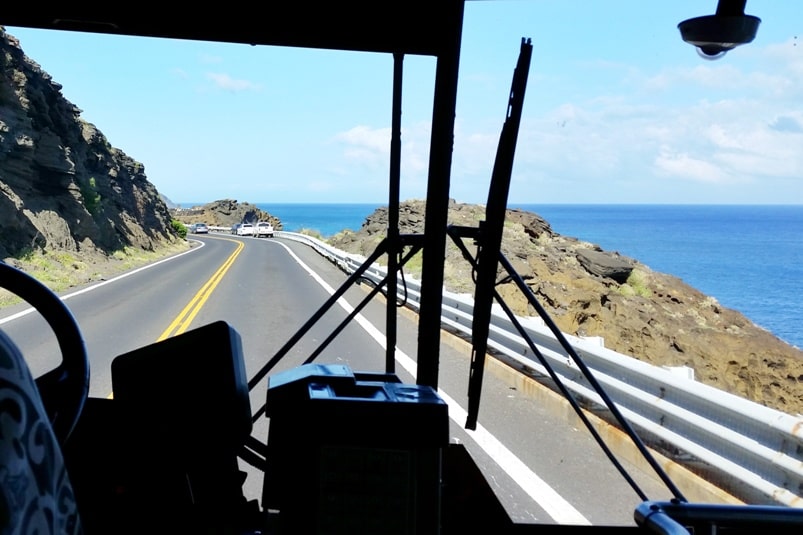 In general, Oahu is considered the best island in Hawaii to visit without a car. Be sure to see ideas for where to go by bus from Waikiki. If you are looking into other Hawaiian islands without a car, also see about getting around Maui without a car.

If you are in Oahu without a car, another option for a great Oahu activity is to go for a tour!

Because Waikiki is a popular resort area on Oahu, there are a number of amazing tours that you can take directly from Waikiki Beach. So if you are staying in Waikiki, it can be convenient to do a tour even without a car. Get out on the water to sail the ocean off the shores of Waikiki! These are tours that start in Waikiki:

Look for the tour reviews!

Plus, you can make it an Oahu circle island tour with pick-up from Waikiki included:

More below with a bit of the visual of getting around Oahu by public transportation!


PLUS... Oahu tour, or on your own: Can you visit Pearl Harbor without a tour?

Is it easy to take the bus on Oahu?!

After you take the bus once or twice, you will feel like a pro! 😉

It’s pretty easy to manage the bus system on Oahu, and Google Maps makes that even easier.

Simply plug in your starting point and end point, click on the public transit icon, and your public transportation options are shown!

It’s a pretty reliable way of getting around Oahu by bus.

I basically used the bus exclusively during one trip to Hawaii when I had 2 weeks on Oahu without a car.

How much does the bus cost on Oahu to go around the island?

This is from anywhere on Oahu to anywhere else on Oahu, no matter the time or distance of the bus ride.

But if you’re taking a bus that requires a transfer, or you’ll be making it a round-trip, then you’ll want to buy the one-day pass.

How do you buy the bus ticket?

You’ll pay the bus fare immediately upon getting on the bus.

There is a fare box next to the bus driver, and that’s where you’ll insert the cash.

It is cash only, and no change will be given to you. So make sure you have exact change.

If you want a one-day pass, you’ll want to tell the bus driver as you’re putting the appropriate amount into the fare box.

Then, the bus driver will give you a pass.

On the next bus you take that same day, you will simply show this to this pass/ticket to the bus driver.

You don’t need to do anything special in regards to the ticket as you’re getting off the bus.

NOTE: There are reports that say starting in July 2021, you will no longer be able to buy a day pass on the bus. There’s the new HOLO card (available now), and you’ll have to get this card ahead of time to act as a day pass. See current information.

Where are the bus stops located?

The easiest way to know where to walk to for the bus stop is to consult Google Maps.

Again, Google Maps is a reliable way for getting around Oahu by bus.

Once you’re ready to get on the bus, open up the Google Maps app on your phone.

Then, type in the destination you want to get to.

And then for the starting location, with your GPS location on, have the directions start from your “current location.”

Be sure to select the public transportation icon to get the directions.

And then it will give you bus directions, including how to get to the nearest bus stop! 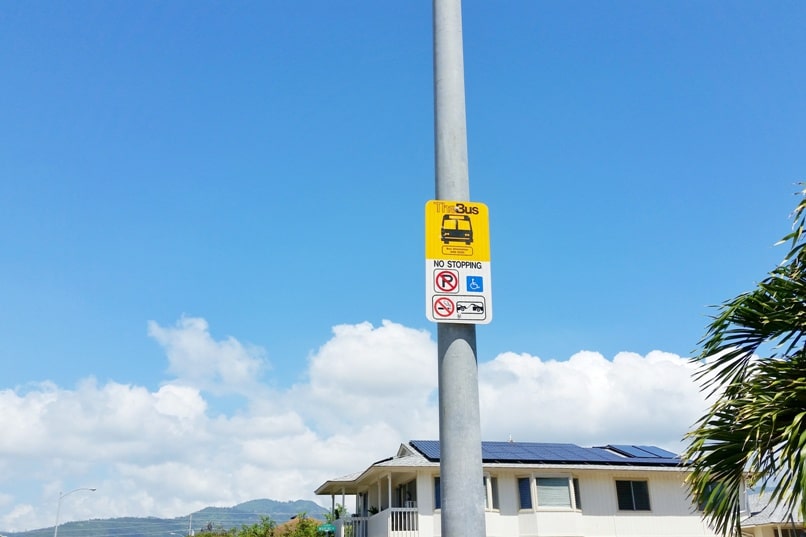 Sometimes the signs will have the bus route numbers on them so that you can confirm that you’re at the right bus stop, as compared with what Google Maps tells you. 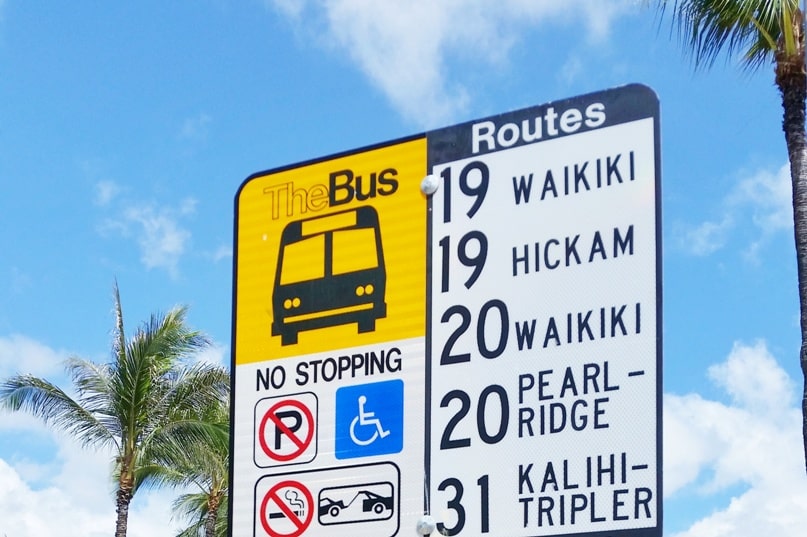 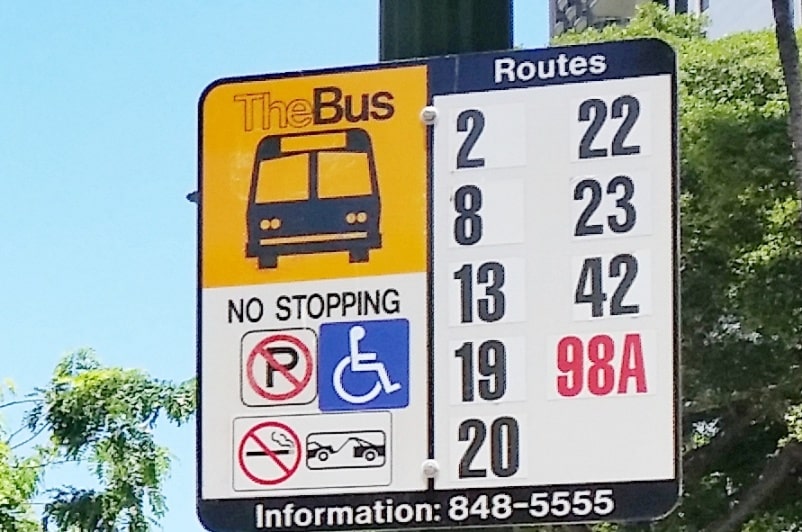 There’s also a phone number listed on the sign if you have any doubts about whether the bus is running on the regular schedule. (Maybe because there’s an event going on or some other special circumstance that results in road closures that alters a bus route or something.)

Some bus stops will have a sheltered area… 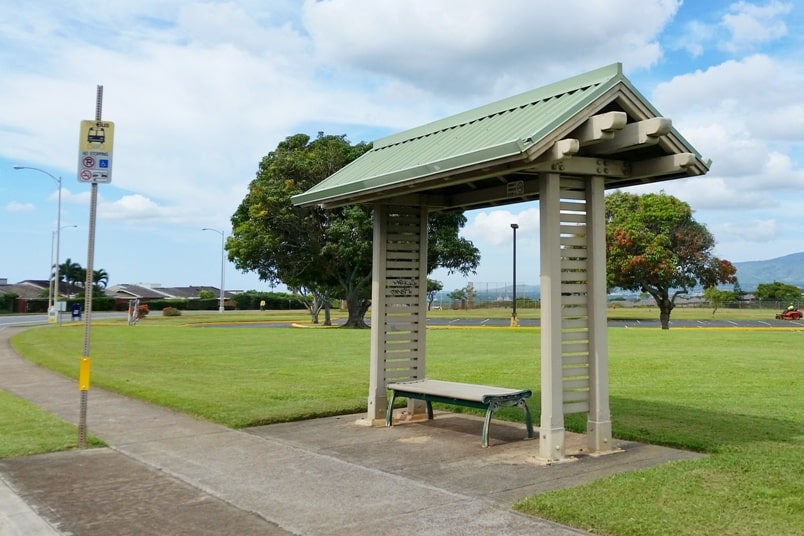 Some bus stops will just have a bench… 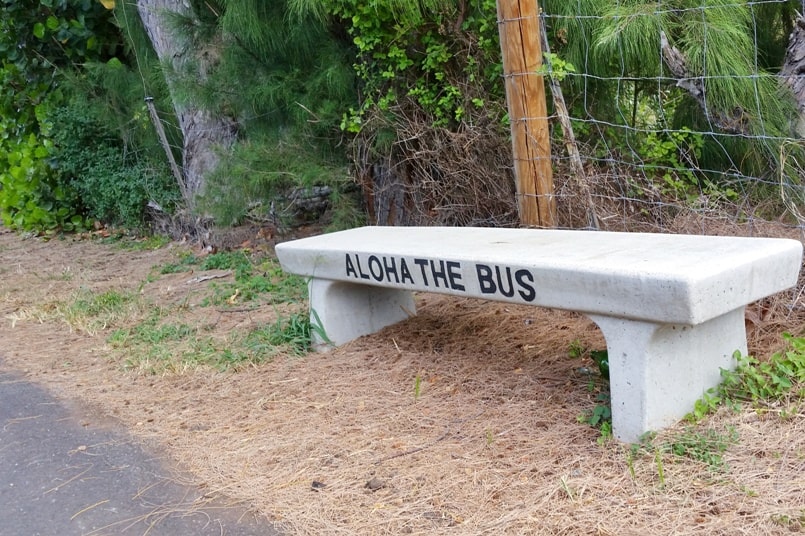 And some bus stops may have no place to sit at all!

No matter what though, you’ll know it’s a bus stop because of that yellow sign. 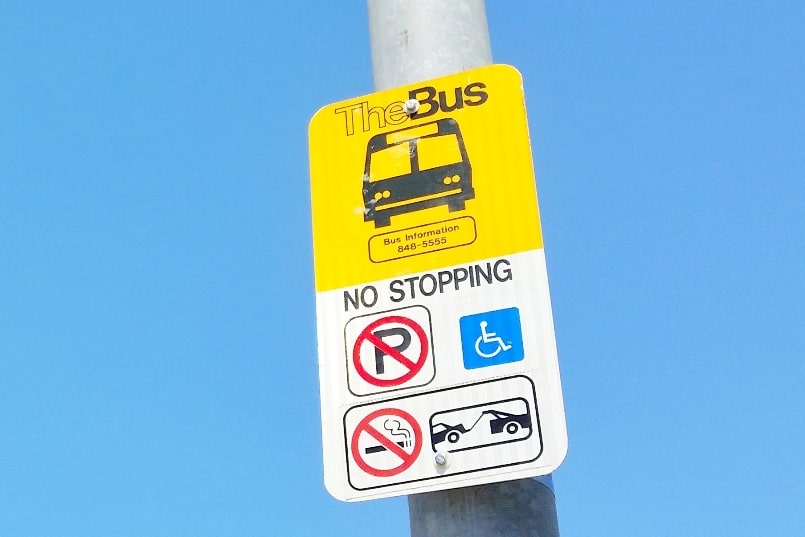 The most important part though…!!!

Make sure you’re standing on the correct side of the road!!

Not that I’m speaking from experience… 😜

It could be good to confirm that you’re on the correct bus once you get on the bus with the bus driver.

What are the bus timings?

So same thing with the bus timings.

I feel Google Maps makes this the easiest.

But what if you’re not leaving right now, and you’re just in the planning stages and wondering how long the bus route will take?

Instead of using current location, you can type in your Waikiki hotel (or any location on Oahu) as your starting location, and then expand out the options to see how frequently the buses seem to come.

In this case, it could also be helpful to change the “departure time” to a time that might be around when you’ll leave.

Weekday vs weekends can make a difference too. Saturday schedules can be different from Sunday schedules too.

So if today is Sunday and you’re doing your Oahu bus research on Google Maps, it could be good to change the date to a Monday or something.

Otherwise, the default is “leave now”… and I have found that leave now is on the current Hawaii time, not your local time.

So again, if right now is like 2am in Hawaii, you might consider changing that to 9am or something.

If you really want to know the official bus timings schedule, you can see here.

But it can be a bit confusing and/or require extra effort to figure out, since you probably don’t know the specific regions or street names on Oahu!

How do you actually take the bus?!

…aka how to get around Oahu without a car!

So you go to your bus stop.

Again, the main thing is to make sure you’re standing on the correct side of the street!

Then, Google Maps will tell you the bus route number, so you look for the bus with that number.

The number on the bus is big and bold so it’s hard to miss. 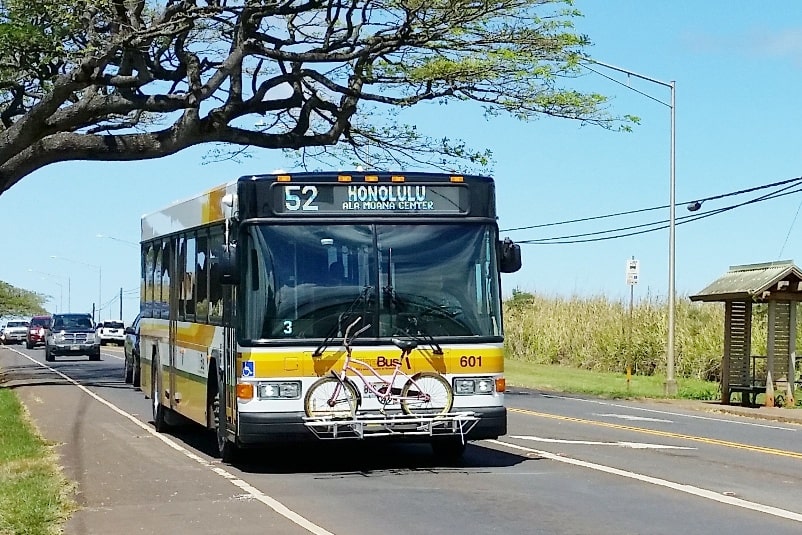 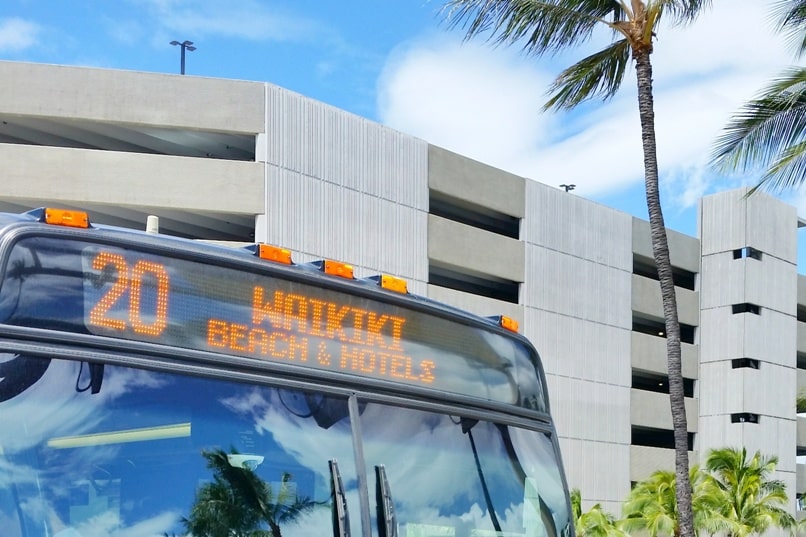 Okay, so your bus comes.

You get on the bus. It could be good to confirm with the bus driver that the bus will go to your intended destination. 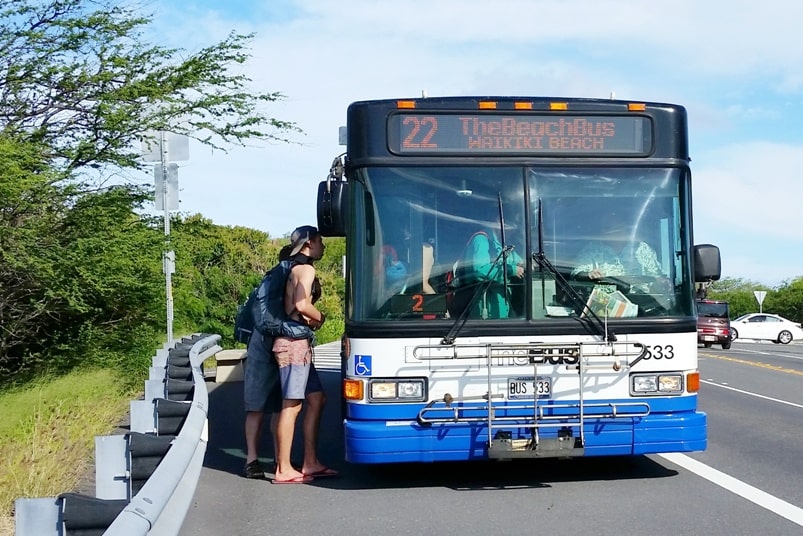 You pay for your bus fare in cash with exact change by placing money in the fare box that’s located next to the bus driver immediately upon getting on the bus. (And maybe get your one-day pass.)

If you have a one-day pass, you will just show this to the bus driver with the date visible.

Then, you find a seat to sit down. 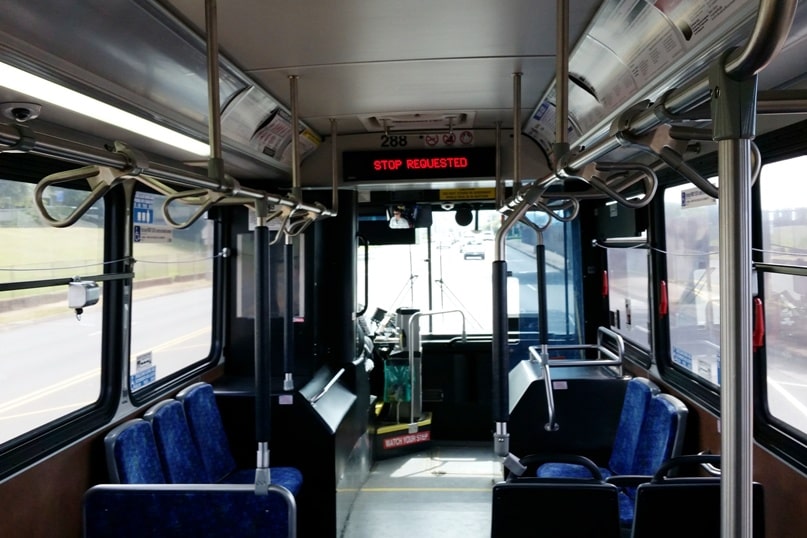 Or maybe you stand if it’s crowded. 😉 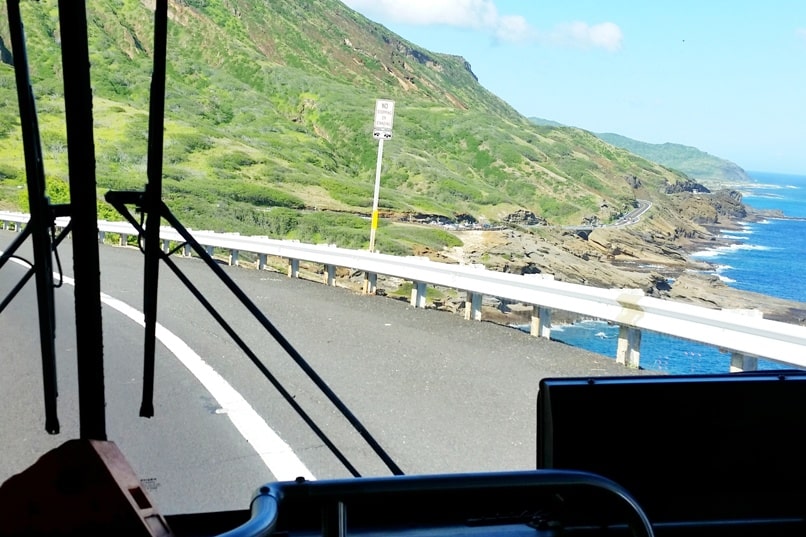 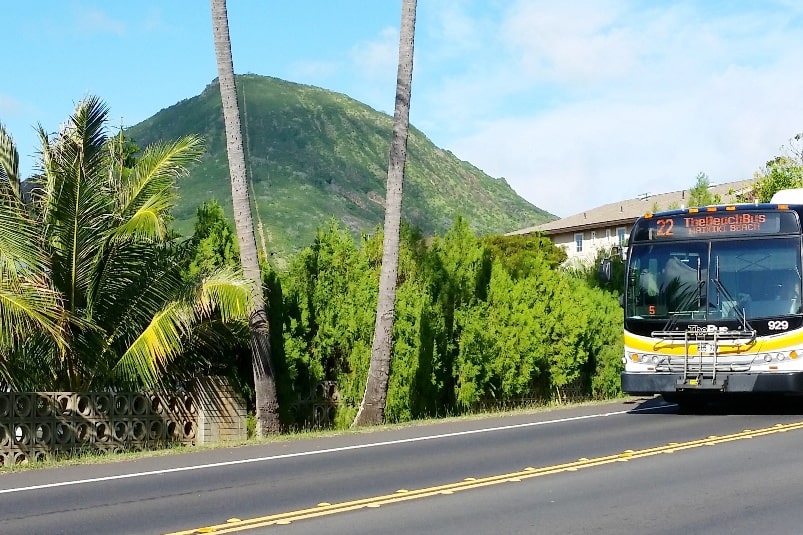 So once you are on the bus, you can check Google Maps to keep track of how close you are to your destination.

If you expand out Google Maps, it will also tell you the name of the bus stops that are before yours.

This can make it easy to keep track and know when your stop is coming up!

Then, once yours is the next stop…

There’s a wire thing along the window. 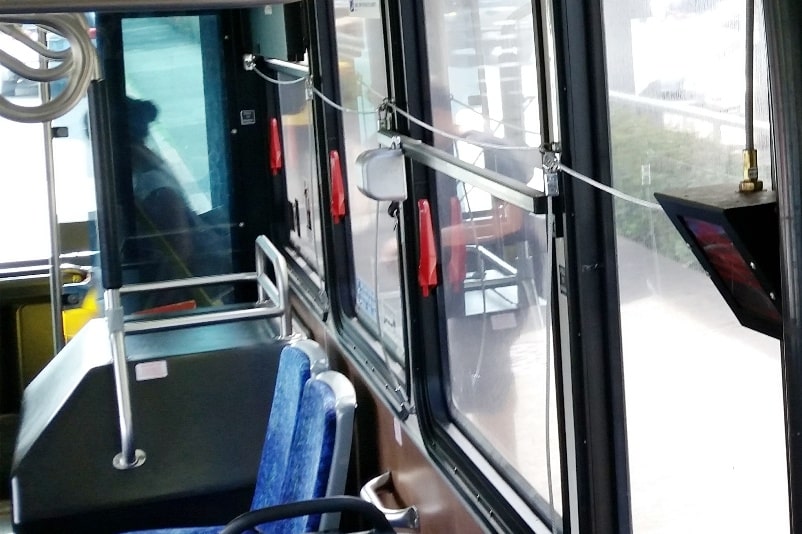 This will indicate to the bus driver that someone wants to get off. 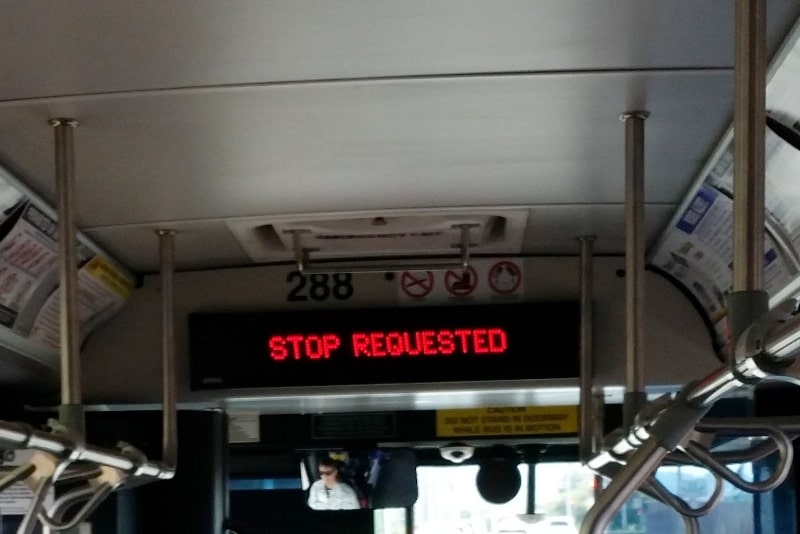 Surely there will be people who will be getting off the bus before you, so you can just watch what they do.

Then, when the bus stops and it’s safe to get off…

The door may or may not open automatically. 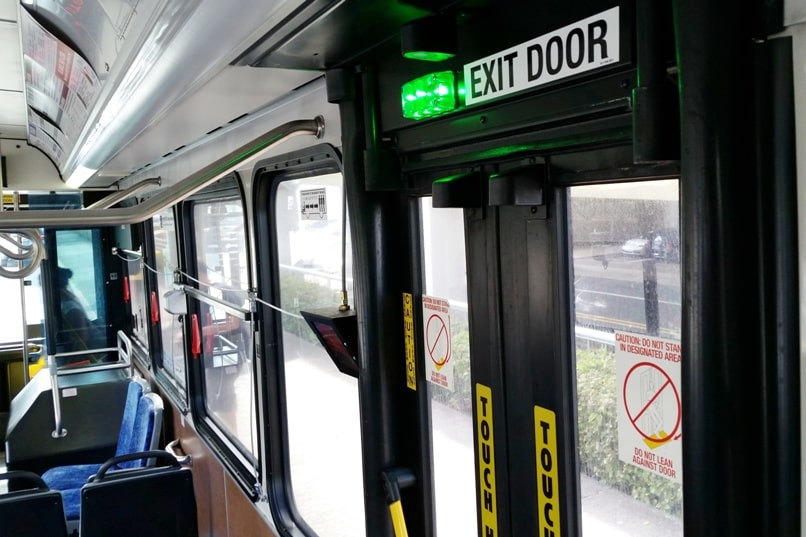 If it’s not opening…

There’s a spot on the door that says TOUCH.

Touch that once the green light lights up. 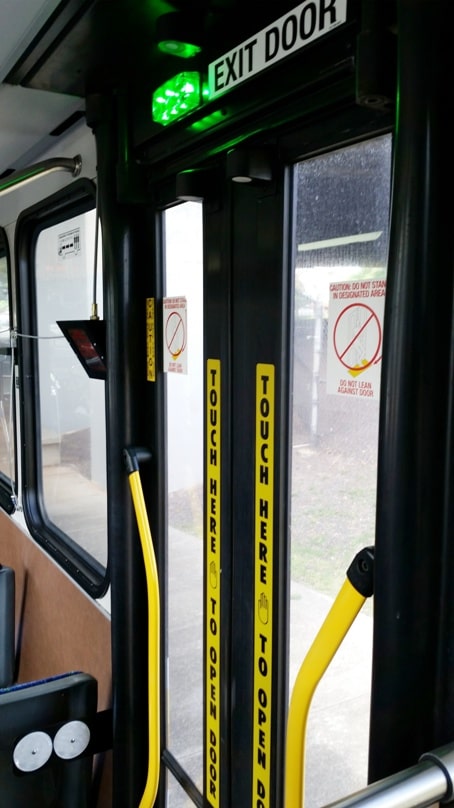 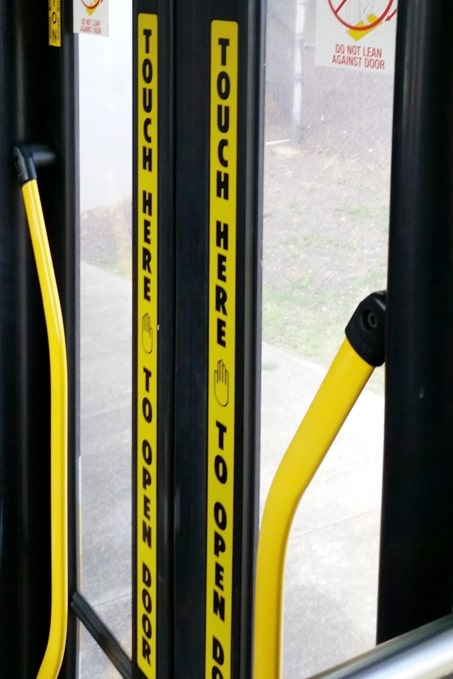 Then the door will open, and you can get off the bus! 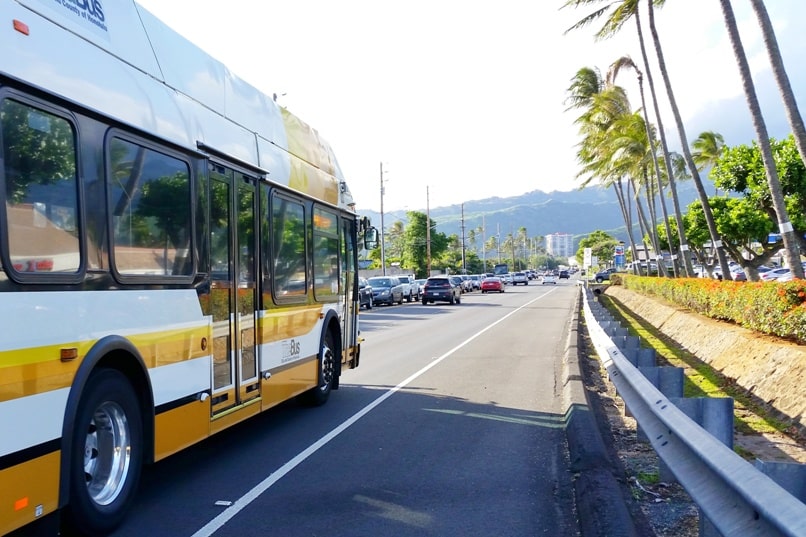 And then walk the rest of the way to your destination, and…

Bikes on the bus 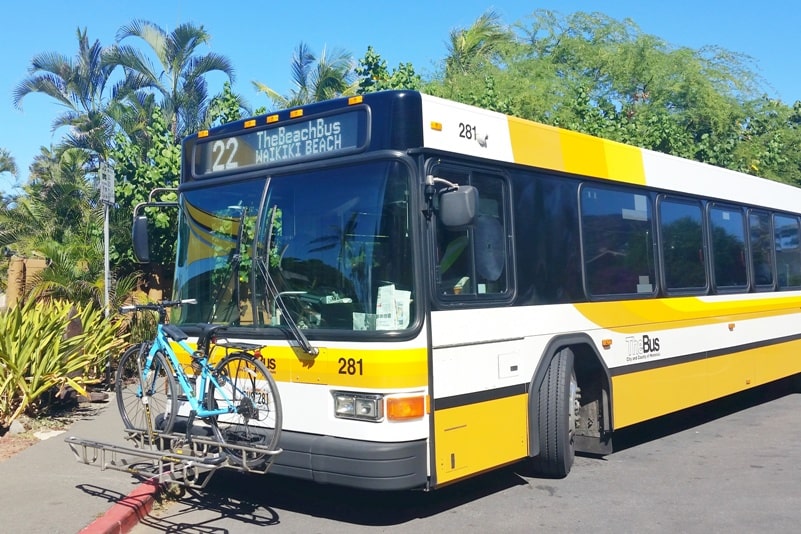 The bus accepts bikes too.

Bikes ride the bus for free.

Each bus is equipped with 2-3 bike racks on the front.

During busy time, you do have the risk of the racks being full.

If you will be taking your bike for the first time, see the visual here (pdf) for how to secure your bike on the rack.

And that’s a little about taking the bus around the island on Oahu!

If you’ve decided to go with taking the bus around Oahu, also get ideas on where to go by bus from Waikiki!

Explore more of Hawaii without a car: 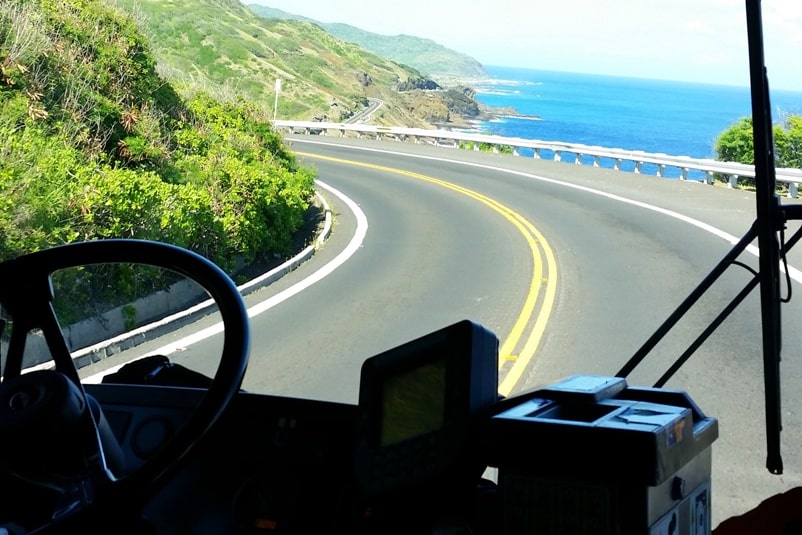 Possibly among the best Oahu maps for tourists!

The Franko maps of Hawaii have a high level of detail for activities and it's beachproof aka waterproof. There's an "adventure" guide map and a "snorkel/dive" guide map. Plus a wall map for home to get you excited for your upcoming trip to Honolulu!

Be sure to take a look at the reviews of these amazing tours on the Oahu: