This is a PACKED national parks winter itinerary that includes Arizona and Utah in the great American Southwest!

It’s also on the heavy side with hiking. And 3 national parks means lots of driving too!

If you’re not so much into the hiking, it’ll be pretty easy to adapt this itinerary to make it a little less active one while still getting in some amazing views.

It can generally work out pretty well even if you just removed the longer hikes, or make them into shorter hikes, and kept everything else.

I also did this in winter (December), but you can make the basic trip plan work for any time of the year.

5 days of exploring some southwest national parks in Arizona and Utah!

The thing about winter in these national parks… It may not always go as planned! (Even more so than summer travel!)

That SNOW can make a difference in what you can do and what you can’t do! (And how pretty the scenery looks!)

As it gets closer to your travel dates, it can be a good idea to check in on the official websites of each of the parks to get current conditions and updates of any trail closures and road closures.

Here are the official pages for the main national parks in Arizona and Utah:

You can go to the NPS (National Park Service) page for any of these parks and the alerts will be at the top.

First, the quick list of the best things to do in winter during your Arizona Utah road trip.

Then, the quick list of how to spend 5 days in Arizona and Utah that includes 3 national parks, along with a map for a better idea of the visual.

The pictures below were taken in December, in the days before Christmas. As you will see, some places had snow, some did not, even though it’s winter!

Or to Angels Landing if you dare 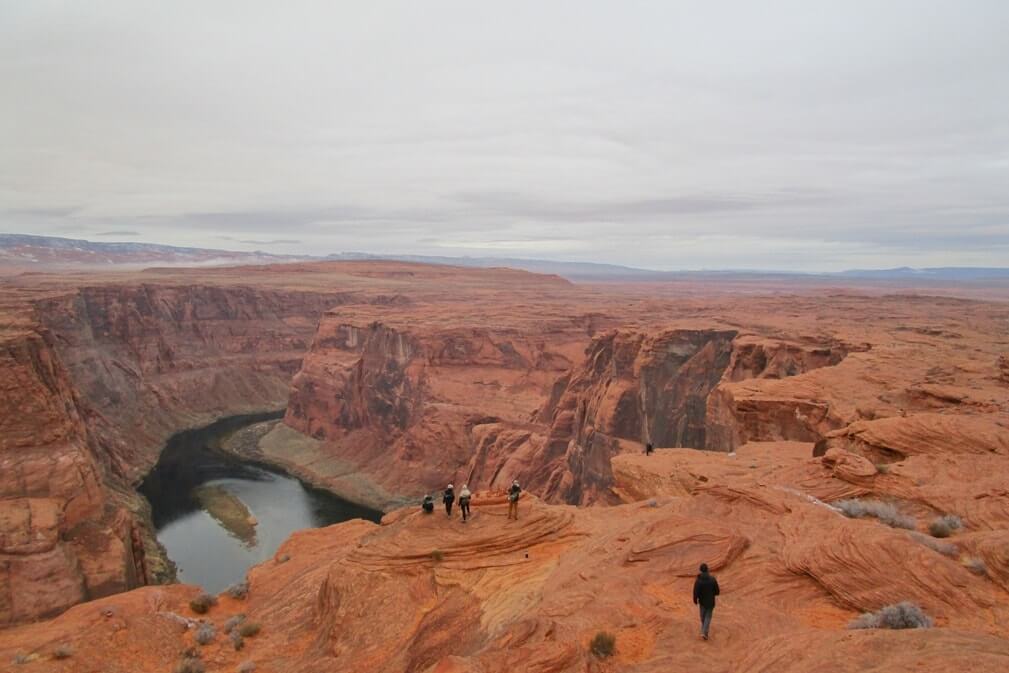 Or keep reading below for more specifics on the 5 day plan!

The cost of entry to visit an Arizona national park or Utah national park is usually around $30 per national park for a 7-day pass. This is per car, and it covers everyone in your car. (There is no one-day pass.)

And generally speaking, if you will be visiting at least 3 national parks, then it will be worth it to buy the America the Beautiful national park pass!

More below about the Arizona Utah national park road trip!

But first… side note!

More for a future national park vacation NOT in winter:

This is as I did it middle to end of December in 2019! (Flying out of Phoenix airport PHX on Christmas day.)

Again, these were mostly FULL days of activities with most of the driving done after sunset and/or starting before sunrise.

While I flew into and out of Phoenix, you might also consider searching for flights into Las Vegas airport LAS, as Las Vegas is known for having lots of cheap flights.

Map of Arizona and Utah together

To get a visual for the basic route of American Southwest itinerary, see the map below or explore it further on Google Maps.

What is winter weather like at these southwest national parks?

And when is there snow?

Dramatic winter storms, bringing several inches of snow, are contrasted with sunny days, perfect for walking along the rim or into the canyon.

Winter conditions on the South Rim can be extreme.

Low temperatures are generally in the teens along the Rim; however afternoon high temperatures still average in the 40s F (4-9 C), due to the amount of sunshine the area receives.

Snow continues to be possible at the higher elevations through April.

When I was in the Grand Canyon in December, there was some snow visible when higher up, the level you’ll be when you are looking at the canyon from above.

The further down you go into the canyon, the temperatures were warmer, and there was no snow.

At higher elevation, I found the Bright Angel Trail (pictured above) to have more snow than the South Kaibab Trail.

See more pictures of this national park in winter: Grand Canyon in December

Also see how much snow there is right now by checking the webcams at the Grand Canyon!

Winters in Zion National Park are cold and often wet.

Temperatures can range from highs of 50-60°F during the day to lows well below freezing at night.

Nearly half of the annual precipitation in Zion Canyon falls between the months of December and March.

After winter storms, snow typically disappears within a matter of hours at lower elevations.

At higher elevations, the snow accumulates.

When I was in Zion in December, there was minimal snow on the ground.

Driving through the park, there was sometimes a little bit of snow left on the side of the road that hadn’t melted.

Overall, there was minimal snow to be seen in Zion.

See more pictures of this national park in winter: Zion in December

Snowstorms in October are not unusual, yet there are also many sunny and pleasant autumn days during the month.

From October to May temperatures fall below freezing nearly every night.

The park typically experiences its coldest and snowiest periods from December through February.

Spring storms in March and April can still produce heavy snowfall that may impact travel in the region.

When I was in Bryce Canyon in December, in short, there was SNOW! Bryce Canyon seems like a GREAT national park to go to if you want a high chance of seeing a good amount of snow any time during winter.

See more pictures of this national park in winter: Bryce Canyon in December

Also check the weather forecast often, including during your winter national parks trip!

It can be good to start looking at the weather forecast more closely once you start getting 1 to 2 weeks out.

It will be important to be flexible with your plans in case there are any blizzards, snowstorms, or otherwise bad weather that could impact driving conditions and activities.

Be sure to check during your trip too.

Weather forecasts can change, and if there’s snowfall predicted for a few hours, then you might want to plan it so you’re off the road, or at least on the road less, so you don’t have to drive as much in unsafe driving conditions!

Be prepared to make changes to your plans in the case that there’s an impending snowstorm coming so you can get out of there before it hits!

And that’s a bit about exploring some national parks in the Southwest!