If you’re looking for a national park to visit in the winter that has snow-packed trails with beautiful winter landscape, then you just might want to consider Bryce Canyon National Park!

As far as how much time to spend in the Bryce Canyon National Park, it’s totally reasonable to make it a perfect one day in Bryce Canyon.

When is there snow at Bryce Canyon?

As per the National Park Service:

Snowstorms in October are not unusual, yet there are also many sunny and pleasant autumn days during the month.

From October to May temperatures fall below freezing nearly every night.

The park typically experiences its coldest and snowiest periods from December through February.

Spring storms in March and April can still produce heavy snowfall that may impact travel in the region.

So, it’s very likely that there will be snow if you visit Bryce Canyon National Park in December, January, and February. It’s also possible that there’s snow in October, November, March, and April.

If you’re wondering if there’s snow right now in Bryce Canyon, have a look at the official Bryce Canyon National Park accounts on facebook and twitter. They usually post recent pictures of the park, and in winter they tend to mention weather conditions too.

Snow is ONLY cleared from the sidewalks at the overlooks and the paved section of the Rim Trail from Sunset to Sunrise Point.

The Rim Trail from Bryce Point to Inspiration Point is closed to all traffic, including skis and snowshoes.

Due to the high risk of rockfall events, the Wall Street section of the Navajo Loop Trail is routinely closed in the winter and early spring.

The Peekaboo Loop Connector Trail descending from Bryce Point is very steep and often closed due to slick conditions and slide potential.

And about general road closures in winter:

Fairyland Road and Paria View Road are intentionally left unplowed in winter to allow for skiing and other winter activities.

Following winter storms, the 18-mile southern scenic drive may close beyond the Bryce Amphitheater at Mile 3 to allow crews to clear the road.

These closures typically last between one to three days, depending on the severity of the storm.

However, the roads and parking lots which provide access to the four main Amphitheater overlooks (Bryce, Inspiration, Sunset, and Sunrise Points) are plowed immediately after winter storms.

As the date for your Bryce Canyon winter vacation gets closer, check this page for current alerts that will include road closures due to heavy snow. They usually mention temporary road closures on facebook and twitter too.

Bryce Canyon is at high altitude!

The generally accepted elevation that starts to be considered “high altitude” is around 8,000 feet (2,440m).

But most people generally don’t feel ill-effects at this height, although it is possible.

The Rim Trail, where most of the hikes listed below start, is around 8,000 feet, with slight variation depending on which part of the Rim Trail you are on.

If you are concerned about the altitude, you might consider staying the night before near Bryce Canyon National Park.

This will give you an overnight to get a little adjusted before you go hiking the next day.

aka best things to do in Bryce Canyon in winter!

I went to Bryce Canyon in December 2019, and the pictures in this blog post are from that time.

Start at Sunrise Point for an out-and-back trail. This hike goes down into the canyon so you’re walking among the hoodoos, and you can go to “Queens Garden” and then go back the same way you came.

Start at Sunset Point for an out-and-back trail. This hike also goes down into the canyon. This is also called the Navajo Loop Trail, but it’s not a loop trail in the winter because the “Wall Street” section is closed.

For a longer and a bit more diversified hike, instead of doing Queens Garden or Navajo Loop as an out-and-back, you can combine these two trails for a loop since they connect.

This is the most popular option for hiking in Bryce Canyon. 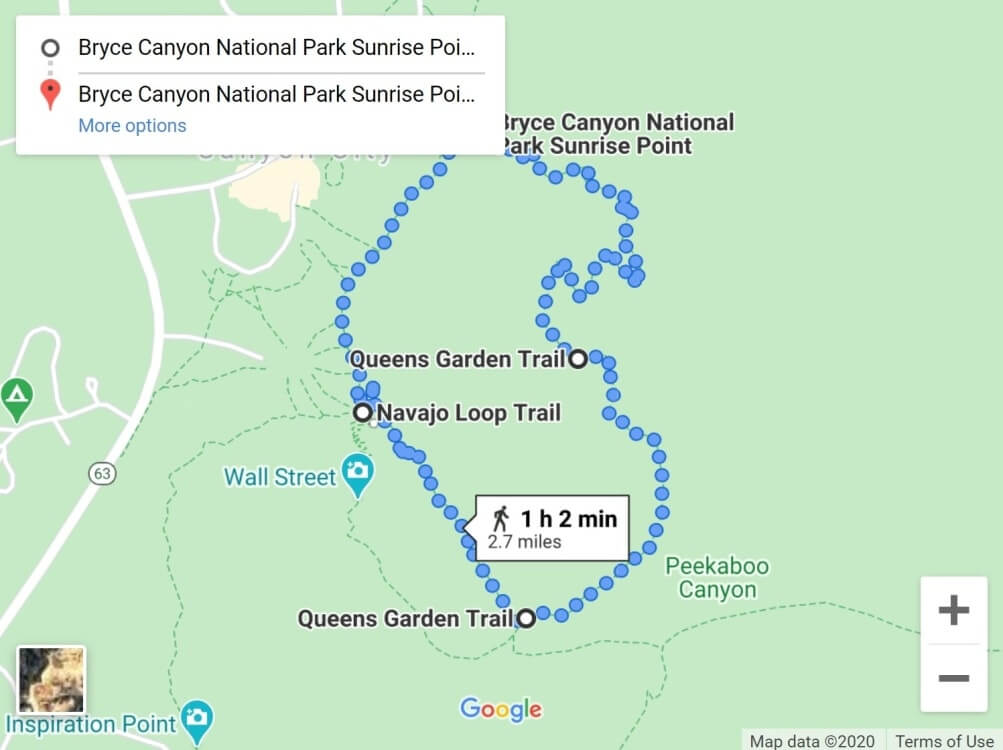 For an even longer and more diversified hike, you can add in the Peekaboo Loop Trail. Peekaboo connects to the Navajo Loop. 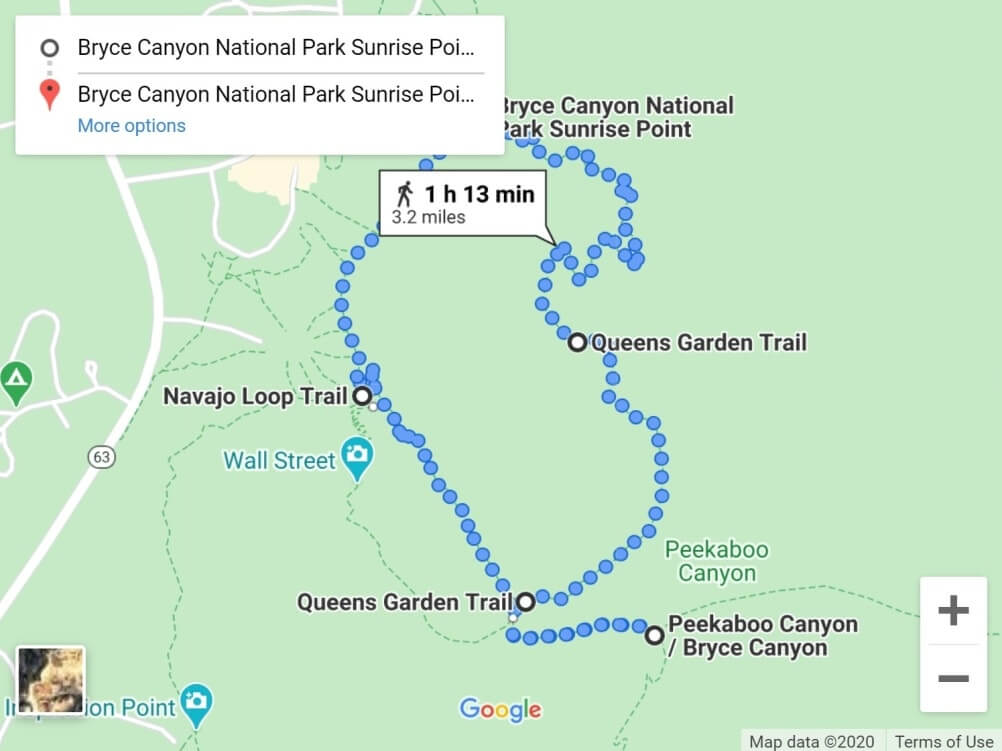 Start at Sunrise Point. You’ll take this trail to do the Fairyland Loop (next listed hike), but you can also make it an out-and-back.

Start at Sunrise Point. You can then take the Tower Bridge Trail to start the hike down. Or you can keep walking along the rim trail and start the hike at Fairyland Point.

Time: 30 minutes to 3+ hours depending how long you want to make it!

So for a solid winter hike, you can choose viewpoints along the Rim Trail that have parking lots to start your hike (Sunrise Point, Sunset Point, Inspiration Point), and then do an out-and-back along the rim. This will give you frequent views of the hoodoos in the canyon from above.

In winter, the Rim Trail between Inspiration Point and Bryce Point is closed.

The road to Fairyland Point is also closed in winter, so you won’t be able to start your Rim Trail hike from there.

This is actually located outside of the main area of Bryce Canyon National Park, but still considered to be a part of a national park recommended trail. So this can be something to do at the start of your day or at the end of your day. Your destination is a small cave with icicles.

This isn’t a specific trail, but definitely an activity to consider if you’re looking to experience Bryce Canyon in winter!

You don’t even need to bring your own snowshoes. That will be provided, for free!

This is a snowshoe hike guided by a park ranger, and the specific trail you do will be determined by the snow conditions that day.

The only real requirement is that you wear snow boots or waterproof hiking shoes – your feet will be checked when you sign up on the day of your hike!

And there are some of the best winter hikes in Bryce Canyon!

What shoes to wear for winter hiking in Bryce Canyon

If you don’t have footwear suitable for winter hiking, then I think a worthy investment would be hiking boots!

Also see tips on what to pack (and what to wear!) for a Utah winter vacation when you’ll be hiking in snow!

Want to do ALL of these trails that are open in winter during your trip to Bryce Canyon this winter?!

This is basically as I did it during the 2 days I was in Bryce Canyon.

The main slight variation was that I wasn’t able to do the full Peekaboo Loop Trail as there was a meeting time for the snowshoe hike… and I was going too slow. 😉

If you are also planning for the snowshoe hike… if you don’t take too much time after you sign up for the snowshoe hike at 8am, and you’re speedy on the trails, then you might have time to do the whole Peekaboo Loop before the snowshoe hike, or at least a lot of it! Otherwise, if you’re interested in Peekaboo, the combination hike of Navajo + Peekaboo (without Queens Garden) might work out better.

If you’ve never gone snowshoeing before and have even a small interest in it, then definitely consider doing the park ranger-led snowshoe hike!

If you want to do snowshoeing on your own, Bryce Canyon National Park can be good for that too.

The Bristlecone Loop Trail seemed like a good spot for it.

The Rim Trail between Sunrise Point and Fairyland Point, as well as between Inspiration Point and Sunset Point seemed like it could be an option too. I say this based on what the trail conditions were when I was at Bryce Canyon.

The Rim Trail between Sunrise Point and Sunset Point is more popular which means more foot traffic which means there’s a greater chance of no snow on this part because the path has been trampled over a lot more.

You can stop by the Bryce Canyon National Park visitor center to talk to a park ranger when you arrive for snowshoe trail recommendations based on current snow conditions!