So you’re packing for snorkeling in Hawaii! 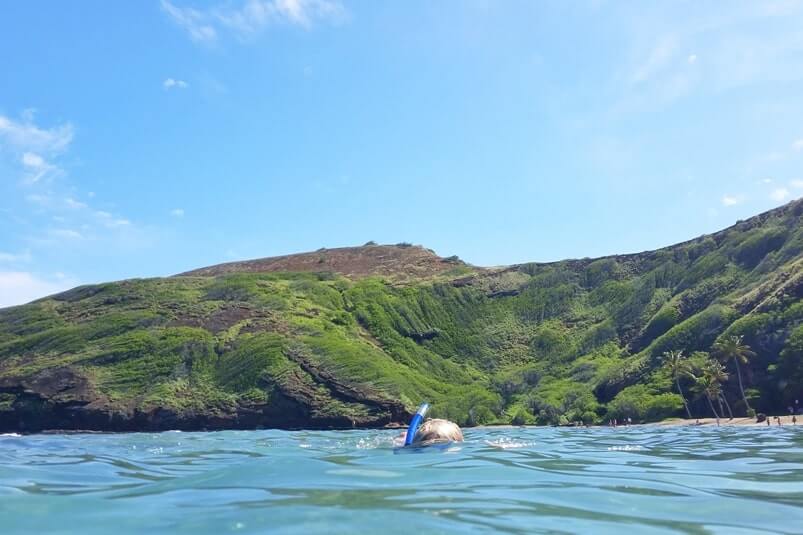 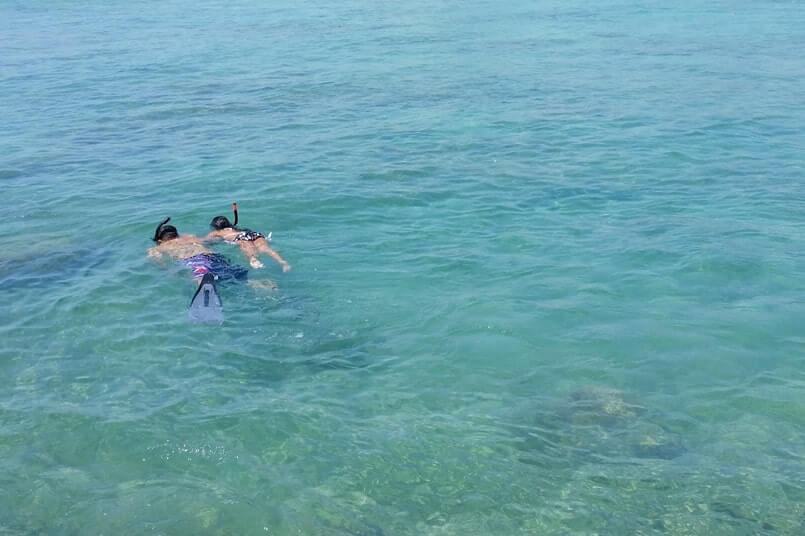 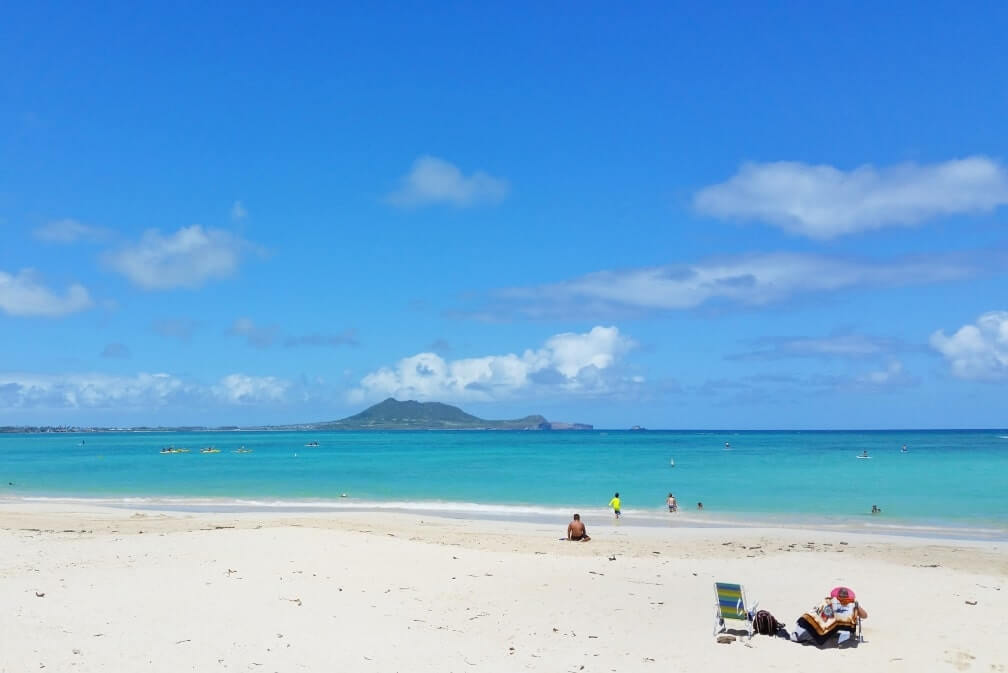 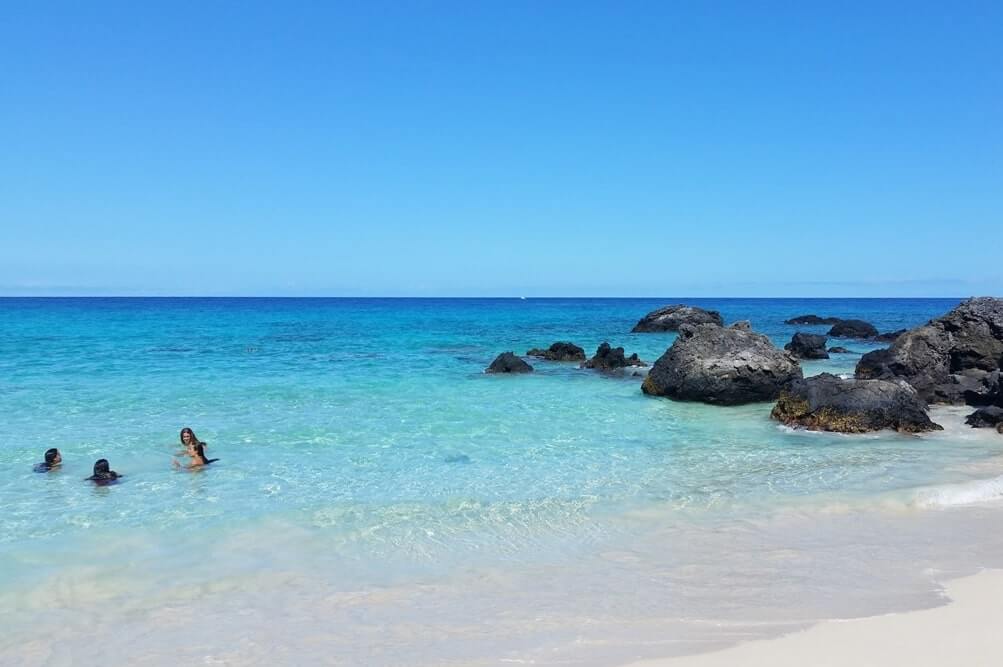 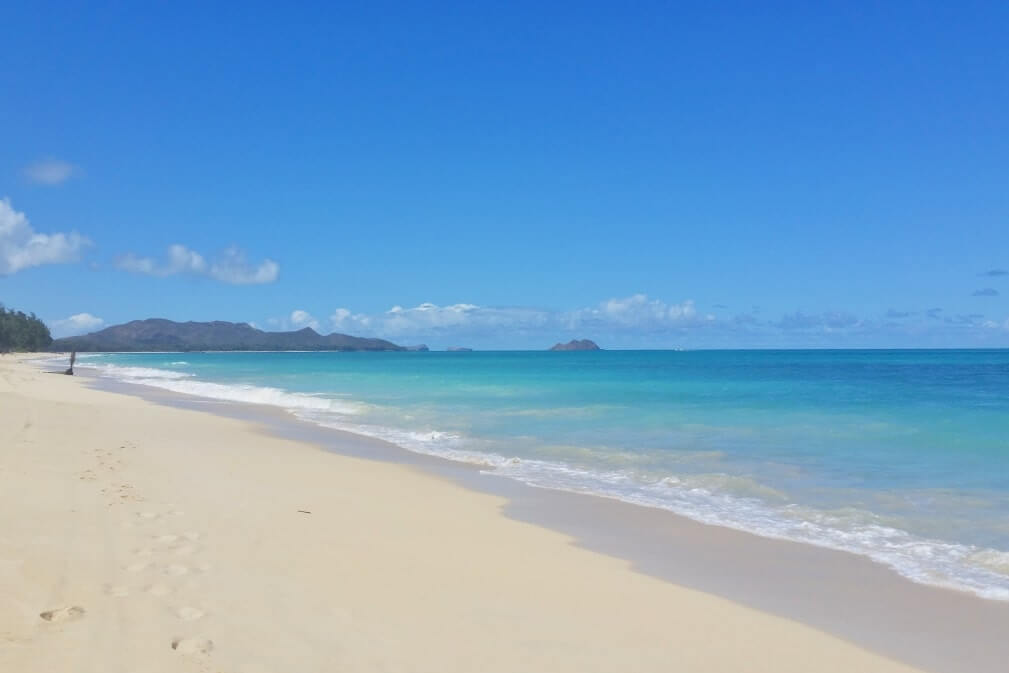 Either way, you probably have SUNSCREEN on your list of what to pack for Hawaii! 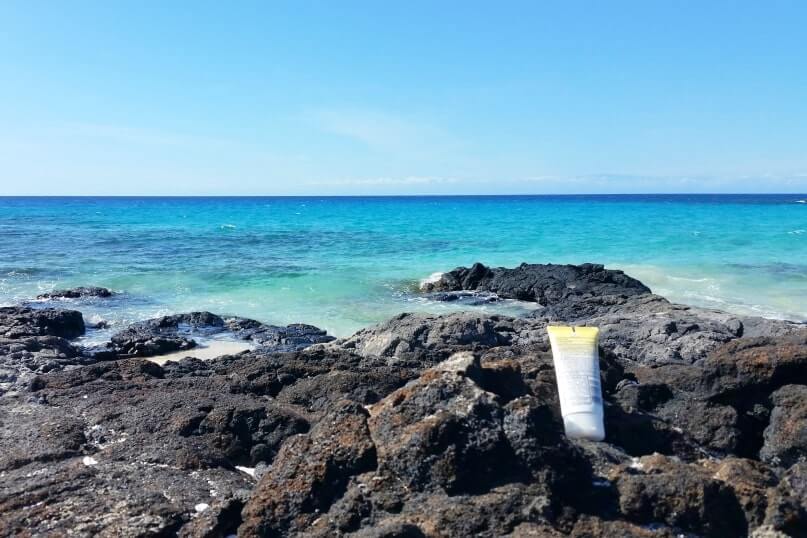 And, you may have heard of a more specific type of sunscreen… reef-safe sunscreen. 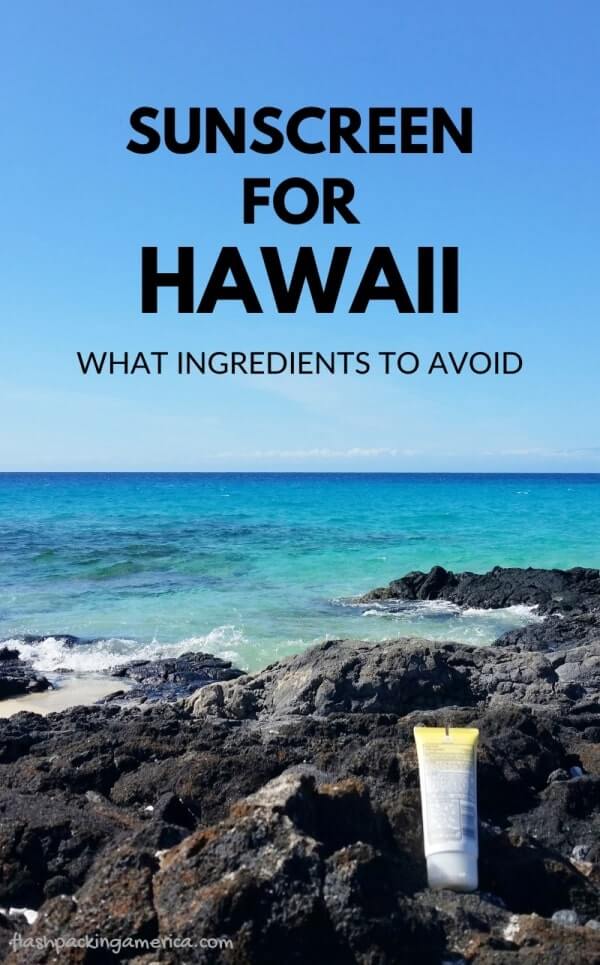 “Reef-safe” sunscreen refers to sunscreen that is safer for the coral reef of the ocean that is around Hawaii (and the rest of the marine world).

When you go into the ocean along the shores of Hawaii, whether that’s swimming, snorkeling, or really just standing around, the sunscreen you wear washes off into the ocean.

That means the chemicals from that sunscreen also go into the ocean.

And there are ocean scientists that say that those chemicals can make their way directly to the marine life of the ocean world.

And these ocean scientists also say that the effect of those sunscreen chemicals is BAD for the marine life, including coral reef.

Around coral reef is among the spots that turtles and colorful tropical fish look for their food. The coral reef is what can make Hawaii a top snorkeling destination! 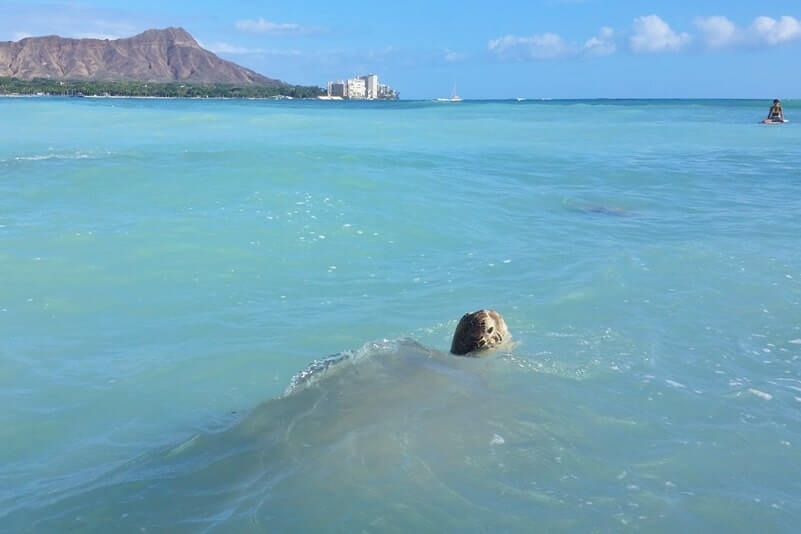 Hawaii sunscreen ban: Is it illegal to wear sunscreen that’s not reef-safe in Hawaii? 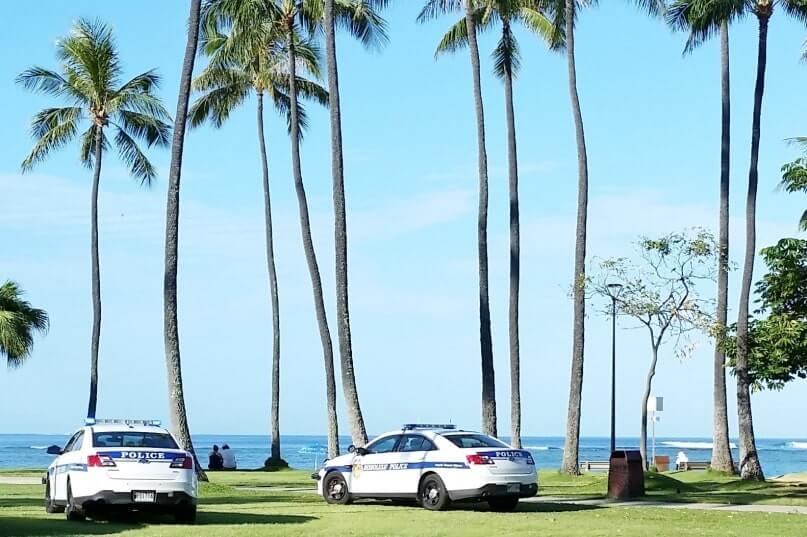 There is what’s been called a Hawaii sunscreen BAN.

This refers to the sunscreen ban that went into effect in January 2021.

Essentially this is a ban against selling any sunscreen product that’s not deemed to be reef-safe sunscreen, according to State of Hawaii standards.

This particular Hawaii sunscreen ban refers to a ban of SALES of certain types of sunscreen, so it’s geared towards the actions of the stores. 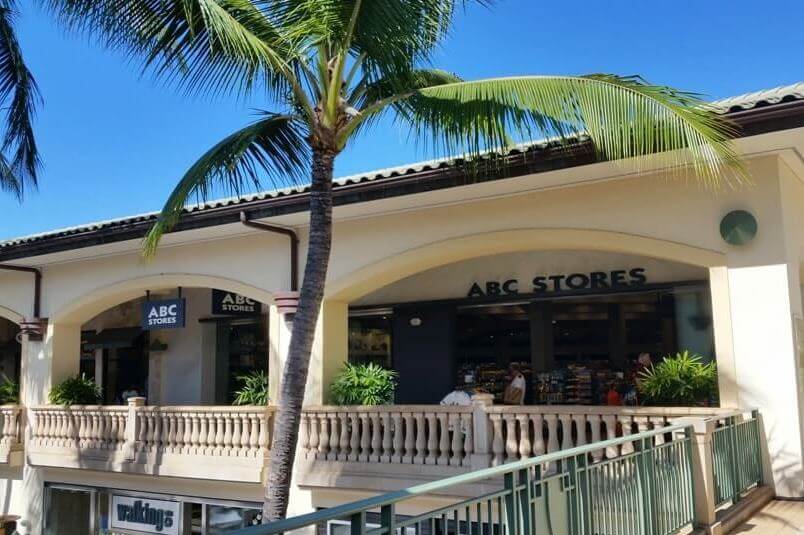 This means that you shouldn’t be able to BUY any sunscreen that’s NOT reef-safe when you are actually in Hawaii, because the stores shouldn’t have it. (Although, you may still find some NOT reef-safe sunscreen in Hawaii, as apparently stores are able to continue selling such products until they run out of their supply from 2020… and also because the Hawaii sunscreen ban may or may not be enforced.)

So there won’t be any police officers roaming the beaches of Hawaii checking what sunscreen you have in your beach bag. 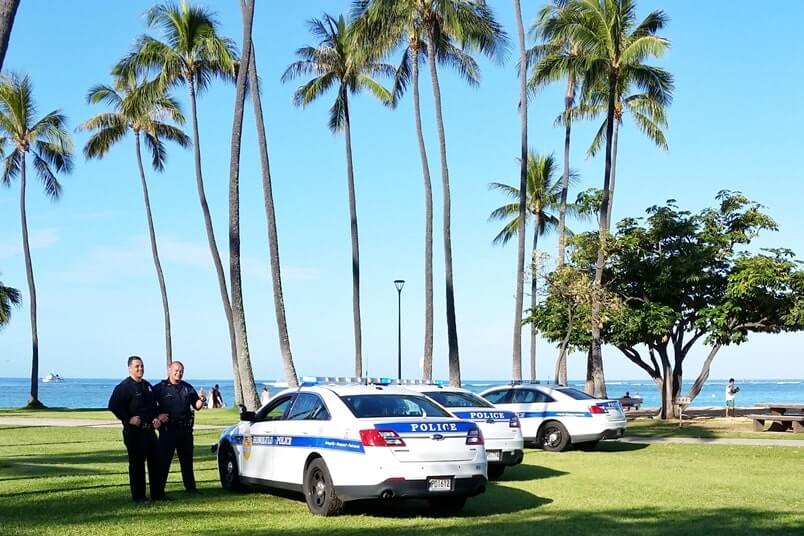 👆 Say ALOHA to the friendly police officers of the Honolulu Police Department! 😄

At least on Oahu, the Big Island, and Kauai there won’t be any enforcement of the type of sunscreen you are wearing!

In addition to that Hawaii sunscreen ban that bans the sales of all sunscreen with chemicals that are deemed to be toxic by the State of Hawaii, Maui will be implementing their own Maui sunscreen ban.

Maui County (which includes the Hawaiian islands of Maui, Lanai, and Molokai) will be making it into law with wording that says that not just the SALES of sunscreen with toxic chemicals is against the law, but also the USE of non-mineral sunscreen is against the law.

This means that you will even more want to be sure to add mineral sunscreen to your Maui packing list!

According to the State of Hawaii:

The sale, distribution, or use of prohibited non-mineral sunscreens would be considered a violation of the Maui County Code, subject to penalties and enforcement procedures.

Fines will be deposited into the County Environmental Protection and Sustainability Fund.

Read more from the State of Hawaii.

And you still won’t have Maui police officers checking your sunscreen.

The State of Hawaii notes that the “administration of the new prohibitions is the responsibility of the County Department of Environmental Management.”

I don’t know what the enforcement of this is going to be like, especially since no one in Hawaii really wants to be the “beach police.”

But whether or not there will be an active “beach police” presence by Maui’s Department of Environmental Management, it would be nice if you still brought along mineral sunscreen, and consider one of the reasons that they are making it not allowed in Maui – to keep the tropical fish and turtles coming back to the shores of Hawaii!

And if you’re going to Maui in spring or summer of 2022, even though this law won’t be in effect, once again it would be nice to bring along mineral sunscreen to Maui!

And similarly, even if you are not going to Maui, and you are headed to Oahu, the Big Island, or Kauai, consider the reasons that they want you to wear a certain type of sunscreen on Maui.

It can apply to all of Hawaii!

More below about what sunscreen to bring to Hawaii!

Aside from sunscreen, also see more of what to pack for outdoor activities in Hawaii!

Do you REALLY need to wear reef-safe sunscreen in Hawaii?!

Can you bring your own sunscreen to Hawaii?

It is not a “requirement” to wear reef-safe sunscreen in Hawaii. (At least not until October 2022.)

So yes, you can bring your own sunscreen to Hawaii from home.

But in the spirit of the current law (more on this below), it would be very nice if you DID wear reef-safe sunscreen when you are in Hawaii.

So it would be nice if you do decide to bring sunscreen to Hawaii from home that you choose to make it the “reef-safe” kind of sunscreen. 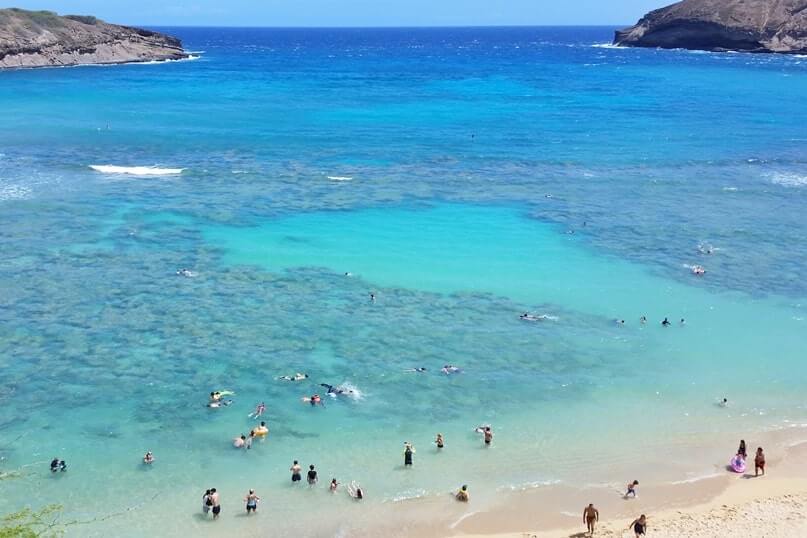 What’s the best sunscreen to buy for Hawaii when you want to protect the ocean environment?!

The quick list of the best sunscreen for Hawaii, deemed reef-safe according to the Hawaii sunscreen ban:

If you are looking at different sunscreen brands, below will tell you how you can know if your sunscreen of choice is reef-safe!

How to know if sunscreen is reef-safe?!

There are basically 2 main sunscreen ingredients that are often cited as most definitely NOT being reef-safe.

The ingredients you want to avoid in sunscreen for your Hawaii vacation:

Now, it’s important to note that these aren’t the only ingredients that are considered to be not as safe for reef, according to the people who are strong advocates for reef-safe sunscreen and reef-friendly sunscreen.

But oxybenzone and octinoxate are the 2 sunscreen ingredients that the State of Hawaii has made a part of the so-called Hawaii sunscreen ban.

So from this, we can conclude that these 2 ingredients are probably the currently known worst sunscreen ingredients when it comes to the health of the ocean environment.

It can be up for debate whether this should be the only criteria to call a sunscreen product “reef-safe.”

But for the purposes of your Hawaii vacation in 2022, we will use the State of Hawaii’s action (aka what they made into law) as the guideline for what’s considered reef-safe sunscreen. 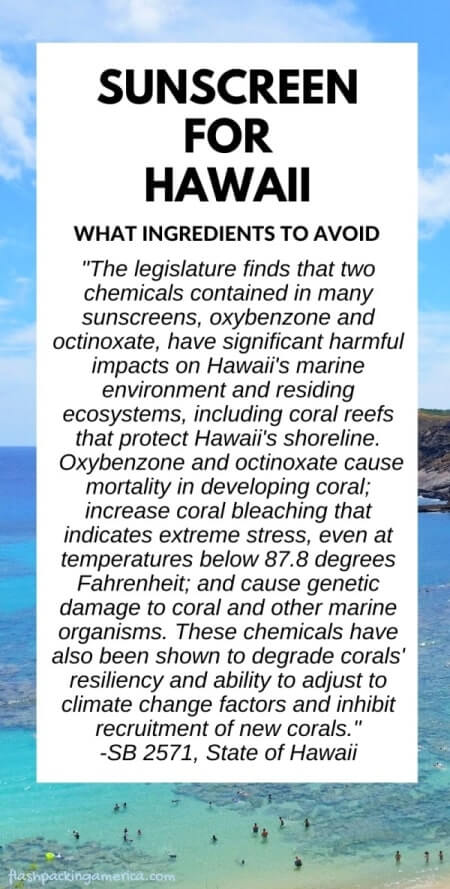 Read more on the official word about why the Hawaii sunscreen ban exists.

Here are some products from a few sunscreen brands.

These are products that don’t contain the ingredients that are a part of the 2021 Hawaii sunscreen ban. 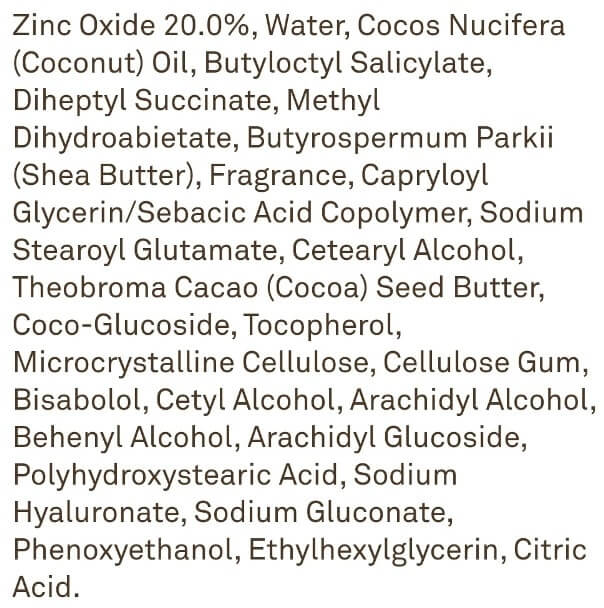 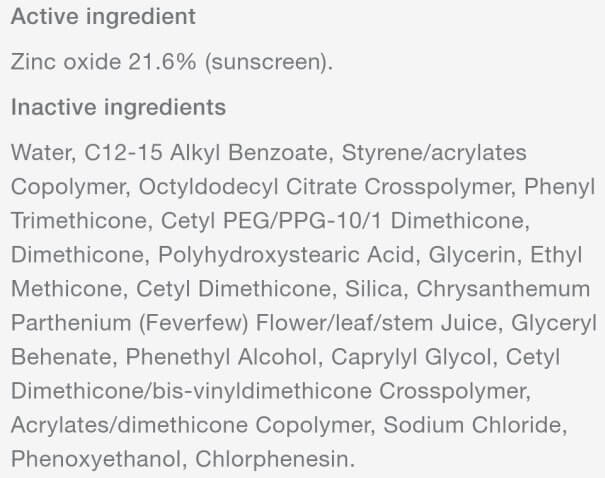 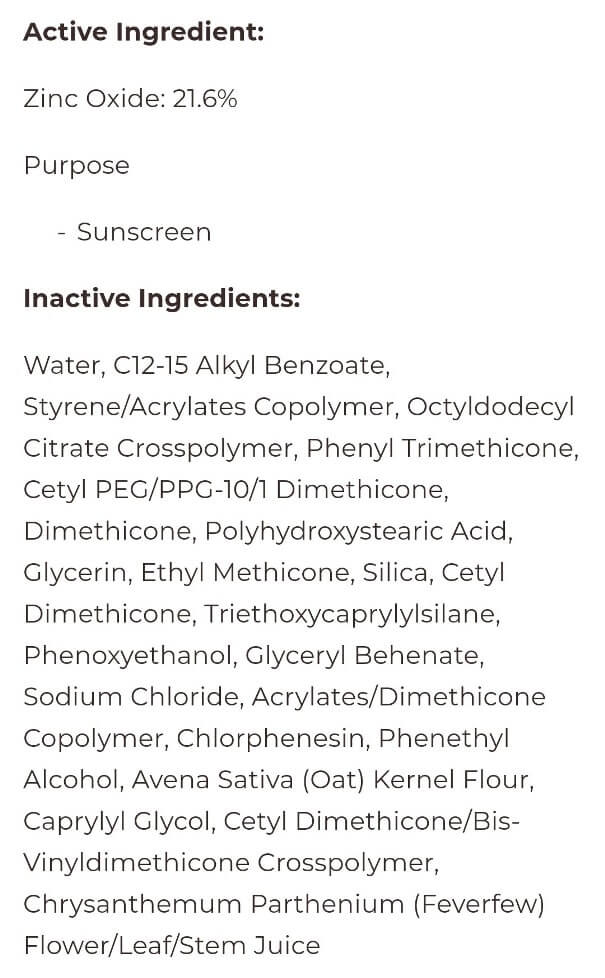 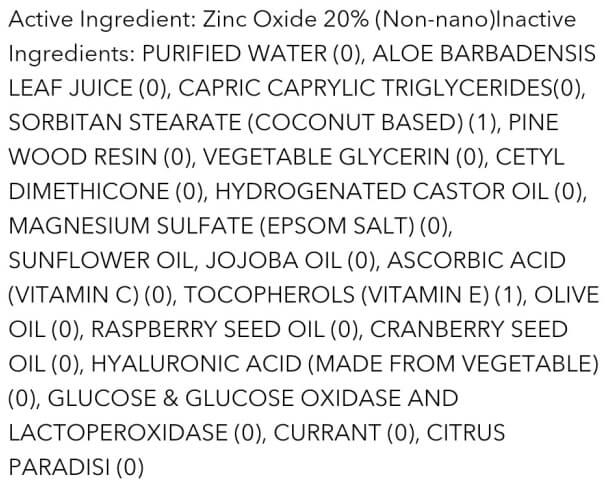 Read the reviews for Thinksport sunscreen.

No matter which sunscreen brand you go for, if you’re looking to be at least somewhat reef-friendly, be sure to check the ingredients to confirm.

EVEN if it says it’s reef-safe.

EVEN if it’s a mineral sunscreen.

EVEN if it says it’s oxybenzone-free.

Some sunscreen brands may deem the sunscreen to be reef-safe or reef-friendly as long as it doesn’t contain oxybenzone. (But they still may have octinoxate.) This is why if you REALLY care to at least try to make your sunscreen safer for the ocean, you will want to be sure to look at the label of the ingredients of the sunscreen product that you actually have in your hand.

And if you want to take it a step further, in addition to oxybenzone and octinoxate, then also check for octocrylene and avobenzone.

The list could go on, but oxybenzone, octinoxate, octocrylene, and avobenzone are more commonly cited chemicals that are said to also be at the top of sunscreen ingredients that’s not reef-friendly.

👆 As seen at a local beach in Hawaii. What sunscreen ingredients some locals in Hawaii would like you to avoid.

The way sunscreen is made can change!

So this is another reason why you’ll want to check to confirm the current sunscreen ingredients, and more specifically the ingredients of the actual sunscreen bottle that you plan to use.

The ingredients of sunscreen products can change.

The ingredients listed above are from checking in spring 2021.

How can you make it so that you can wear LESS sunscreen?!

The less skin you have exposed, the less sunscreen you have to wear!

You can cover up your skin more by wearing a swimming shirt or a rash guard.

So if you wear a swimming shirt, it means that you’ll be using far less sunscreen. That means less sunscreen will be entering the ocean. It also means you have to be less concerned about having to reapply sunscreen too.

And if you take the word “sunscreen” literally, as in something that “screens” the sun, then actually, the BEST sunscreen for Hawaii is a swimming shirt!

But even if you do wear a swimming shirt, you’ll still have exposed skin, so you will still want the traditional sunscreen for the rest of your body!

And that’s a bit about reef-safe sunscreen for Hawaii!

More things to pack for snorkeling in Hawaii:

Plus the list of top things to pack for Hawaii! 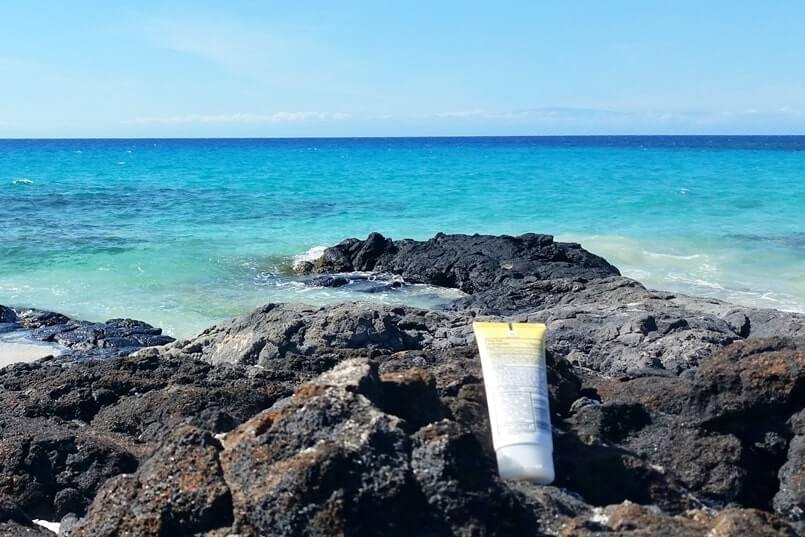 Watch the videos to see Hawaii in action!

Find amazing things to do on Maui: Watch my Maui videos on youtube

Find amazing things to do on the Big Island: Watch my Big Island videos on youtube