Once I knew the exact location of where the ride share pick-up point was, it was easy.

But well, I did not initially know where the exact location of the Honolulu Airport uber pick-up point, so I did not think it was easy to find at all!

But, since you are here now reading this, it will be easy for you!

You can get picked up by Uber from the Honolulu Airport.

Where is the Uber pickup at Honolulu Airport?

The Uber pickup at Honolulu Airport is on the second level in front of lobby 2, lobby 5, and lobby 8. 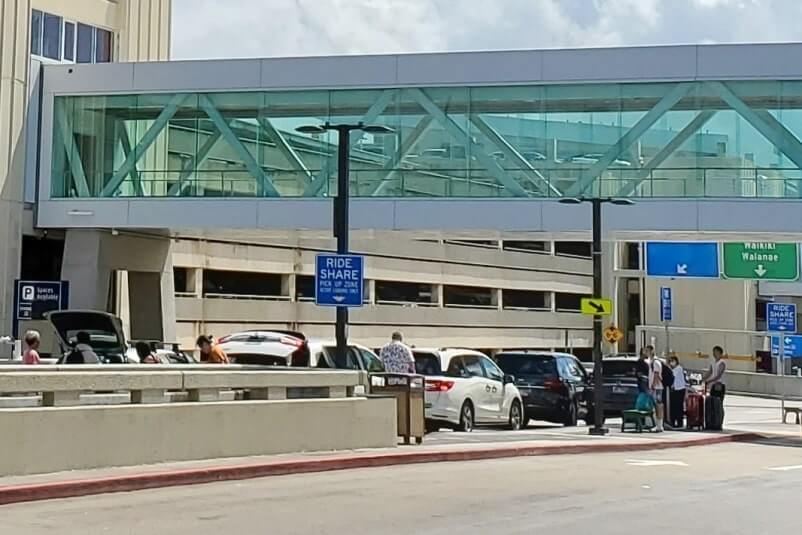 To get an Uber from Honolulu Airport, you need to go to a designated Uber pick-up point location.

There are several designated ride share pick-up points at the Honolulu Airport.

All of the Uber pick-up points are located on the upper level.

So first, you will get yourself upstairs if you are not already there!

Then, the locations of the Honolulu Airport Uber pickup points are in front of lobby 2, lobby 5, and lobby 8.

So, once upstairs, you will start walking to whichever one is closest to you! You can look for signs that point to any of these lobbies.

You will cross the road to get to the Uber pick-up point. 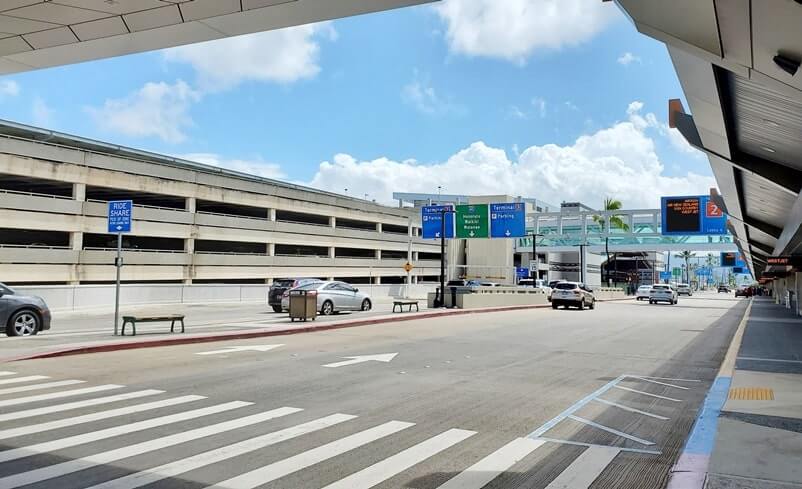 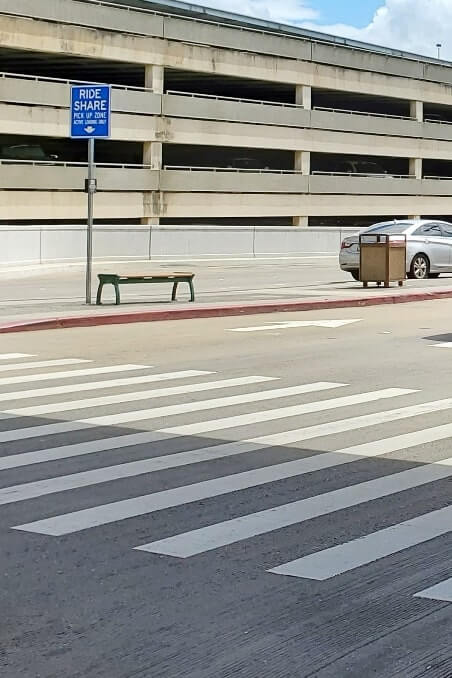 There are benches so you can sit while you wait for your Uber driver. 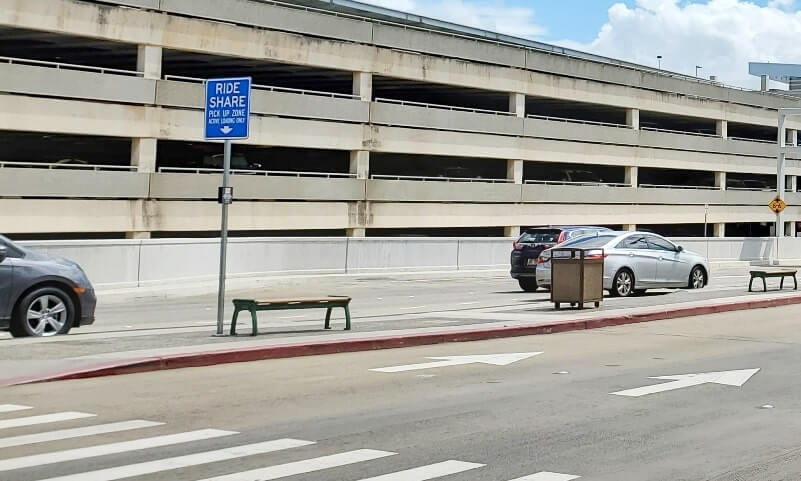 I went to the ride share pick-up point at Honolulu Airport in September 2022. Pick-up points can change!

How much does Uber cost from Honolulu Airport to Waikiki? 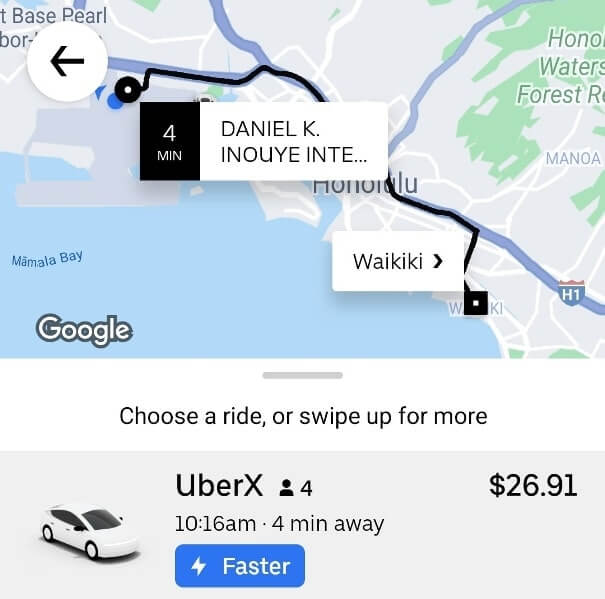 The cost of an Uber from Honolulu Airport will generally be between $25 and $50.

It will depend on your arrival time.

You can check the cost of an Uber even if you aren’t currently in Honolulu. You can set the origin point as Honolulu Airport.

To get the best idea of how much an Uber will cost you, it’s best to check the Uber app during your expected time of arrival.

So if your flight into Honolulu Airport is scheduled to arrive at 3pm, set your alarm for 3:30pm or 4pm Hawaii time for today or tomorrow, and check to see what price shows up then.

Ideally you will want to match whether it’s a weekday or weekend, and possibly even better if you match the exact day of the week.

Of course, there can be many variations, but this can start to give you an idea so there will be no shockers.

Before I flew to Honolulu Airport, I had checked the app during times that were not my actual arrival time. The cost of an uber to Waikiki had shown up between $40 and $50.

When the plane touched down in Honolulu, I opened up the Uber app to check what the current price was. It was showing as $27. (This was around 10am.) 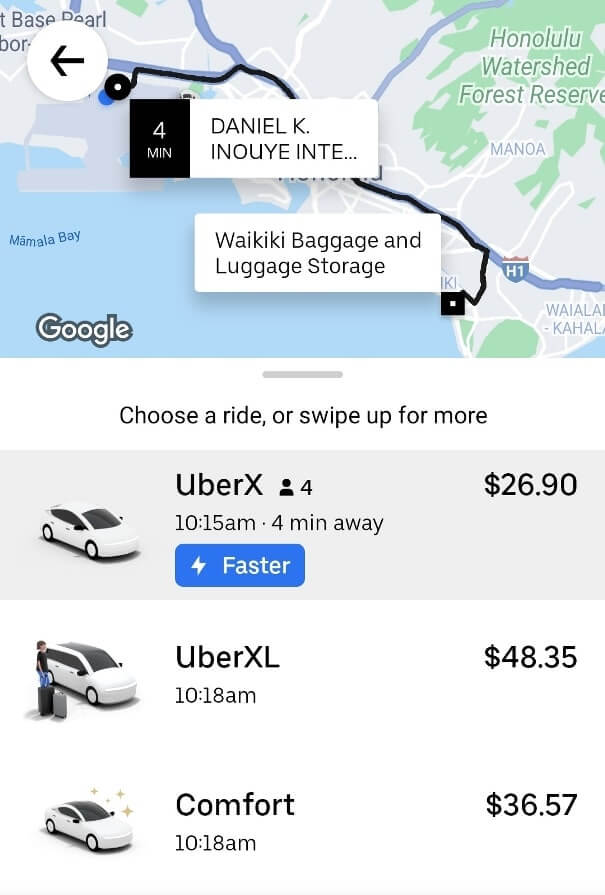 An hour later, the cost of an Uber from Honolulu Airport to Waikiki was $31. 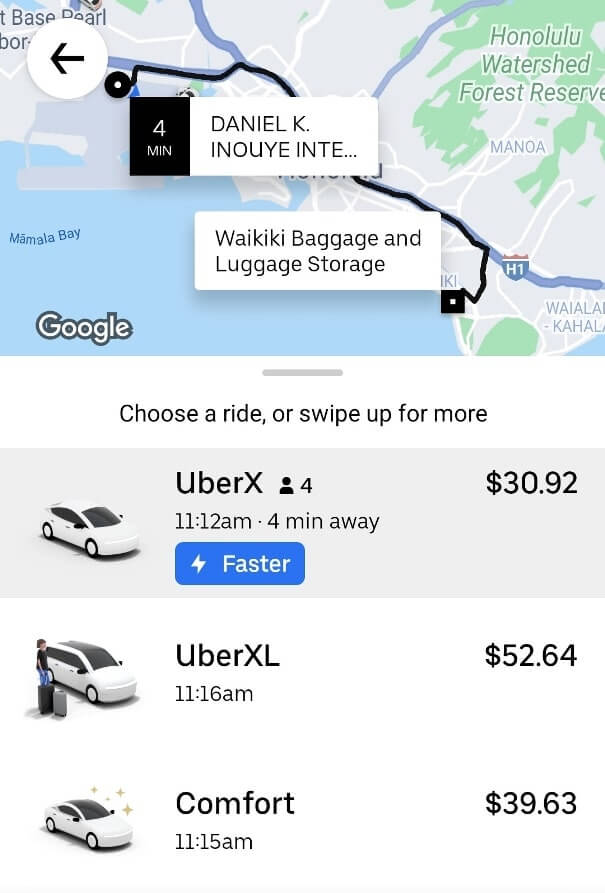 I was an international arrival to Honolulu Airport when I did this uber.

As an international arrival, I found the directions to the ride share pick-up point signage to be lacking!

International arrivals are on the lower level.

After I exited the airport, I saw signs that said ride share pick-up was upstairs (great!), so I went upstairs. But from there, I did not see any signs anywhere. Where do I go?! It was quite annoying. Did I miss the sign?!

But anyway, eventually I learned that there is a ride share pick-up point in front of Lobby 5, and once I knew that, it was easy.

There were signs to the different numbered lobbies!

So actually, once I arrived at the Uber pick-up point, I was about to open up the Uber app when an Uber driver who was there asked if I was going to Waikiki. I said yes. He said he will take me there for $25.

It turns out, this Uber driver had arrived at Honolulu airport to pick-up someone else who had called an Uber, but the rider canceled.

So once you confirm that your Uber has arrived, off to Waikiki you go!

Since I was staying at an airbnb and had a morning arrival before check-in time (aka no option to drop off luggage early), my first stop was luggage storage in Waikiki!

If you have a morning flight arrival before check-in time or late flight departure well after check-out time, you can typically expect your hotel to hold luggage for you at no extra cost. But of course, confirm this with the hotel you’re staying at!

And that’s a bit about Uber from HNL!

More ways to get from Honolulu Airport to Waikiki:

PLUS: Things to do in Waikiki (for VIEWS!) 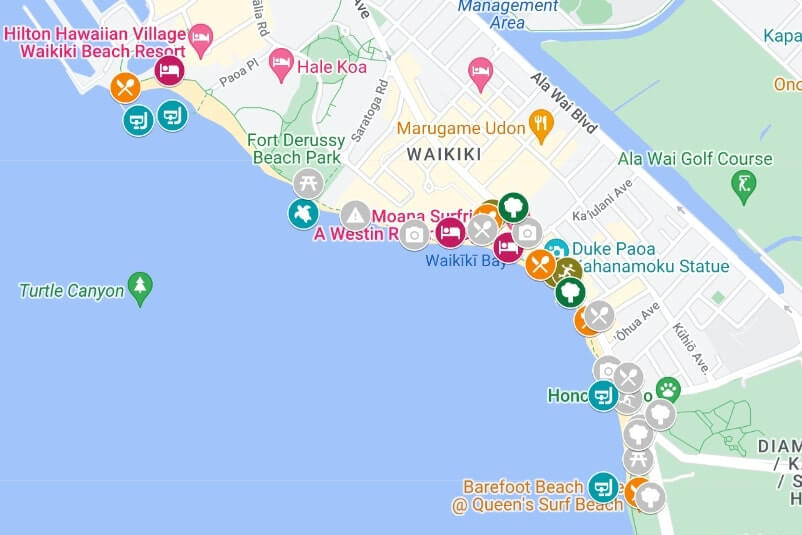 More of the best things to do in Hawaii for VIEWS!