LANAI SHUTTLE: Getting around Lanai without a car on a day trip from Maui 🌴 Hawaii travel blog

Lanai is a less-visited Hawaiian island that can be reached by taking the Lanai ferry from Maui. (You can also fly to Lanai.)

Many people go to Lanai as a day trip. It can be a great way to get away from the crowds of Maui if you’re staying in West Maui and want to get a taste for another part of Hawaii.

So, is it possible to visit Lanai without a car?! 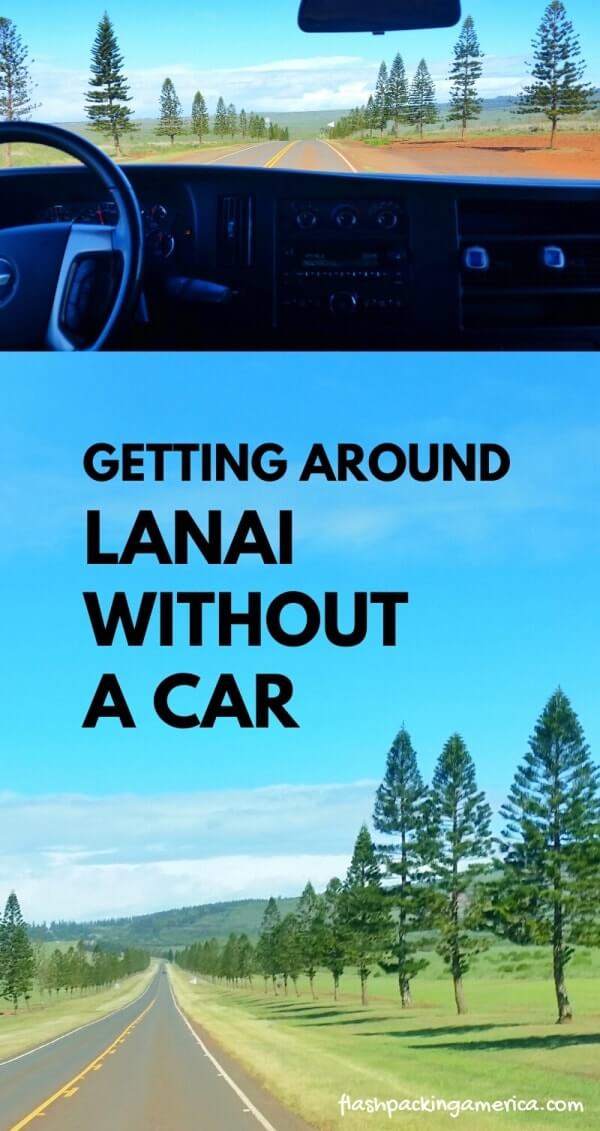 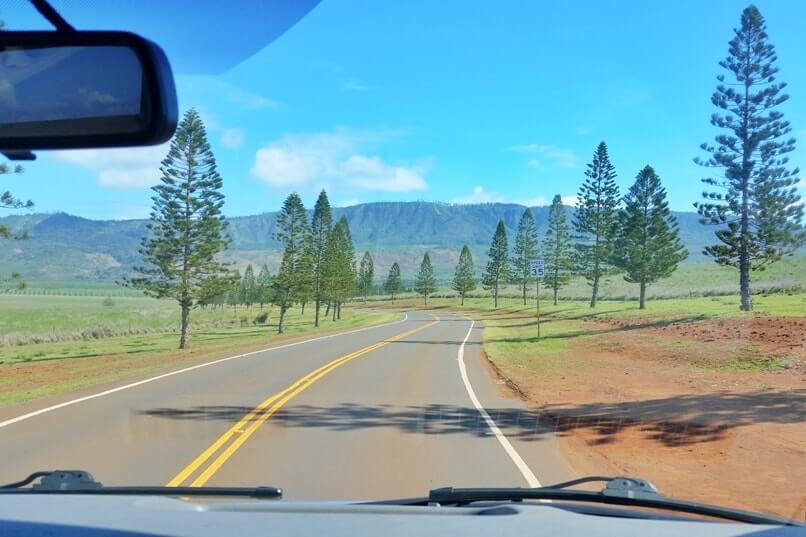 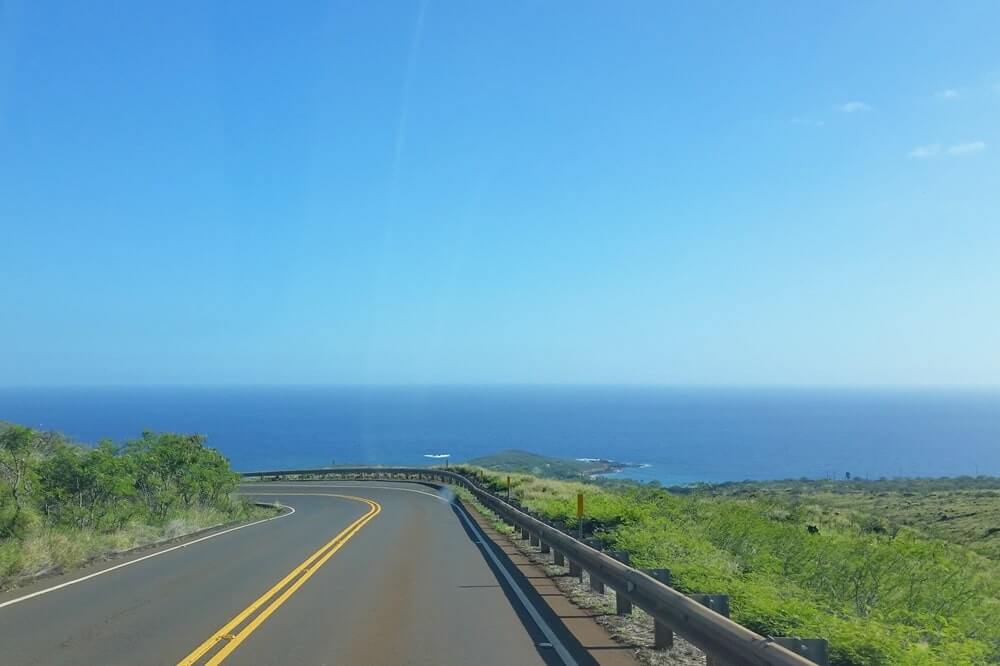 Of course, renting a car can make things a lot more convenient.

And in the case of Lanai, a car will also allow you to get to places you can’t get to otherwise. Or rather, a jeep or other 4wd will allow you to explore the island more! 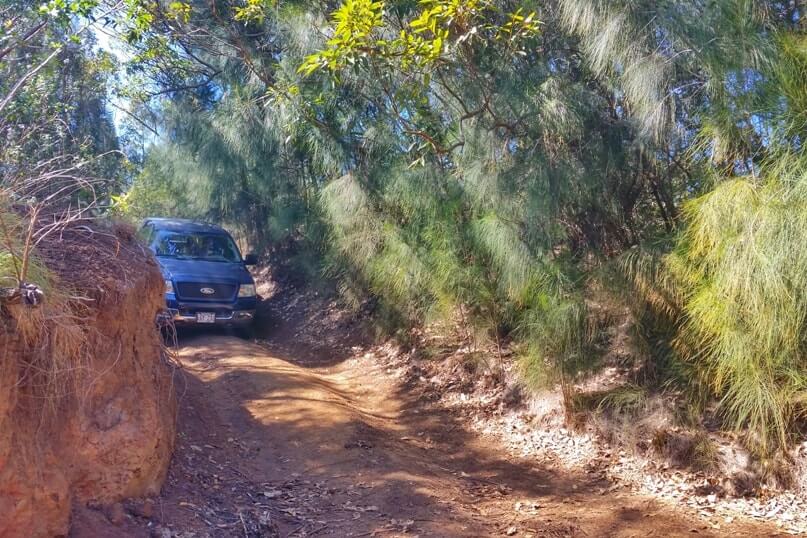 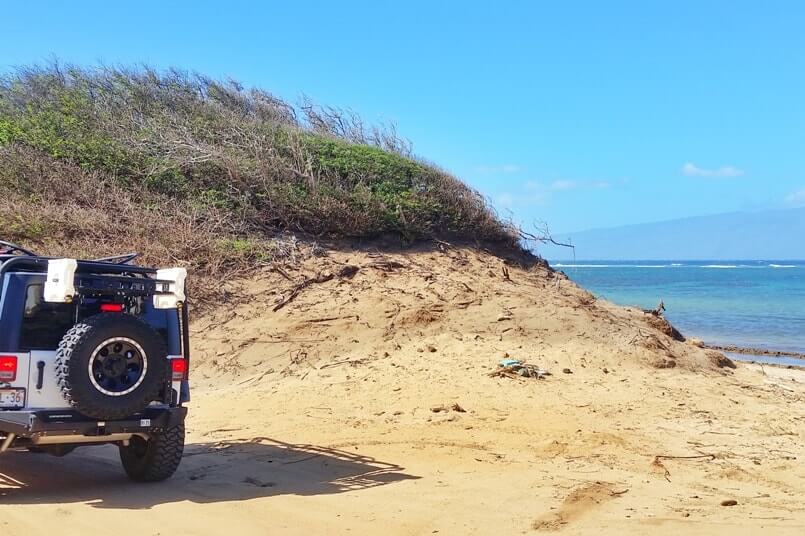 But it’s not unexpected for the cost of a rental car to be over $200 per day. (What’s said to be among the most “reputable” car rental companies on Lanai costs like $240 a day.)

And if you don’t rent a car on Lanai?

In the case that you’re not renting a car, it is possible to get around a small area of Lanai without a car.

There’s a Lanai “shuttle”! This would be the “public” way of getting around. 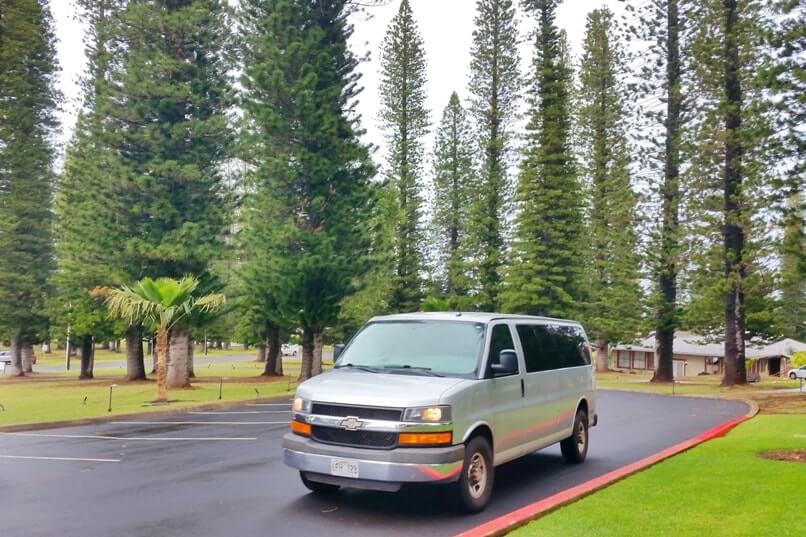 First, the quick things to know about the Lanai shuttle.

Then, a bit more about taking the shuttle around Lanai.

And then, a few places to go on Lanai when you’re getting around the island by shuttle!

Tips are appreciated. $1-2 should be good.

And it’s a shared ride sharing service. So it won’t just be your private group in the car, but you will likely be riding with someone else.

3. When you’re ready for pick-up, you’ll call the shuttle service and request a pick-up. 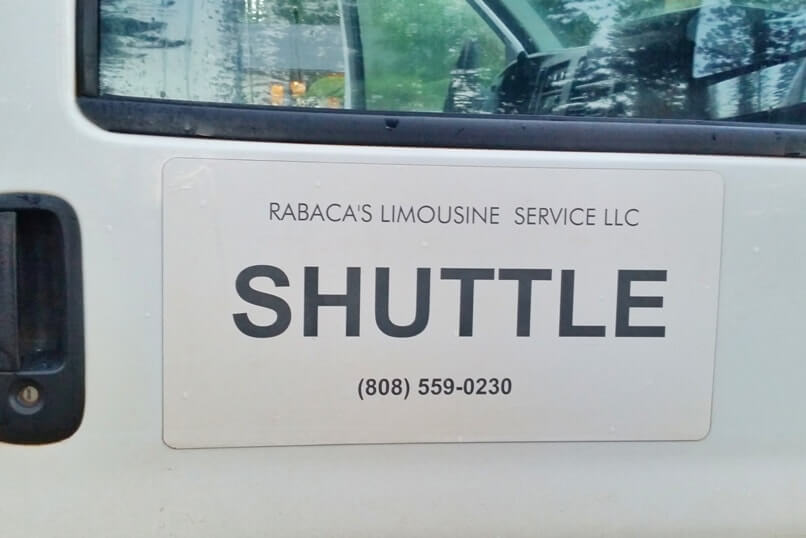 The Lanai shuttle phone number is 808-559-0230. I called this number a few times in early 2020 to use the Lanai shuttle. You can call it now to confirm their services. (Well, keep in mind Hawaii time!)

4. The Lanai ferry port (harbor) will have someone waiting for a pick-up at ferry arrival times.

So you probably won’t need to call if you’re looking to get a ride from Manele Harbor, which is where you’ll arrive if you’re taking the ferry from Maui.

5. The shuttle will basically go anywhere there’s a paved road. 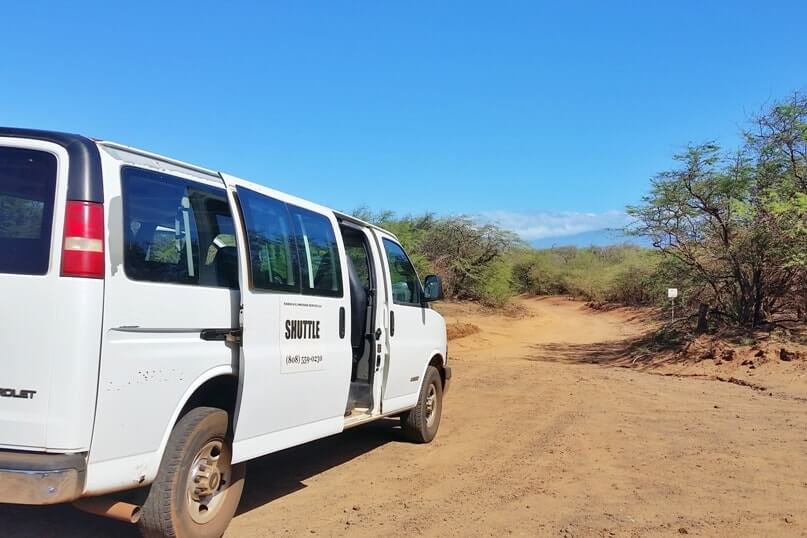 End of the paved road! A 2 mile walk from here to get to Shipwreck Beach! There’s a lot of the island that doesn’t have paved roads, but there are still things to do!

A bit more about getting around Lanai without a car! 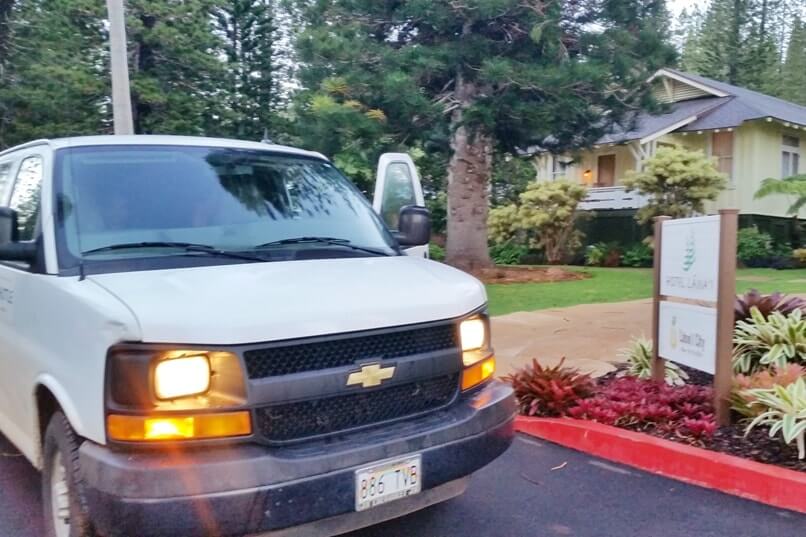 This is based on my experience taking the Lanai shuttle a few times in February 2020!

There’s the Lanai shuttle, which is the Rabaca’s Limousine Service.

The “limousine” service isn’t really a typical limo that you make think of at all, and it’s really been the only shuttle service on Lanai.

And as of early 2020, it continues to be the only Lanai shuttle service. (Not including the private shuttles like the resort shuttles.)

There is no Uber on Lanai.

The shuttle is the closest thing to a ride sharing service.

The basic way it works is that when you are ready to go somewhere, you call the Lanai shuttle and tell them where you’d like a pick-up.

There’s a good chance you won’t be the only one they are transporting around. For some common pick-ups and destinations, there are designated timings. (You can call to find out the updated timings.)

The Lanai shuttle is also the closest thing to a Lanai bus or Lanai public transportation.

Where to go taking the Lanai shuttle

Or where to get a pick-up

If you’re flying into Lanai, you can request pick-up and drop-off at the airport.

2. Manele Harbor (where the ferry from Maui arrives) 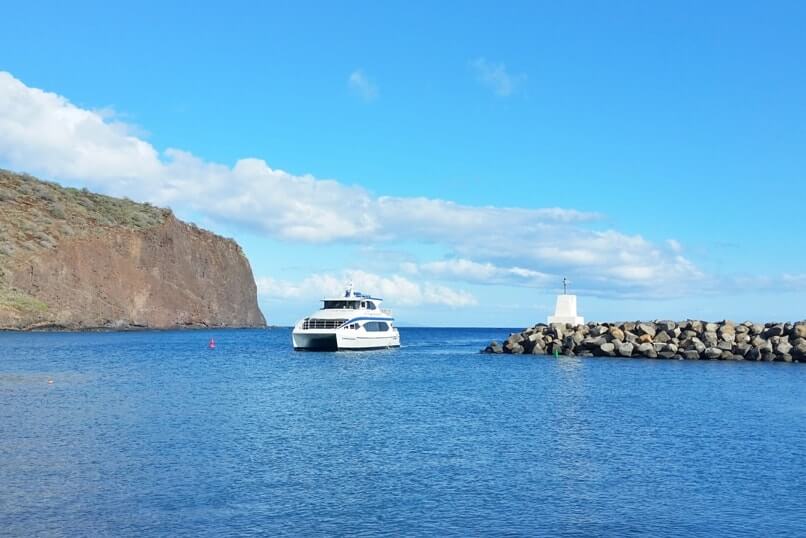 With the ferry service from West Maui having specific arrival times to Lanai, you can expect that someone will be there holding up a shuttle sign. You can go over to them and tell them that you’d like a ride. 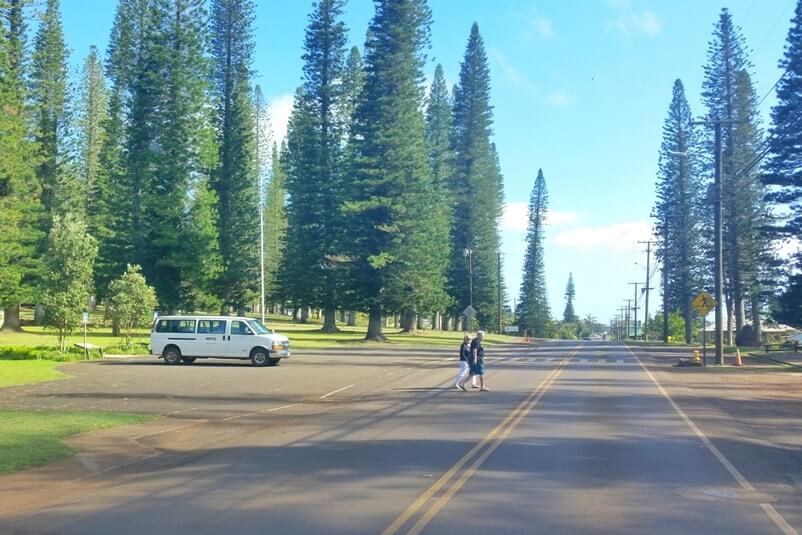 Whether you’re arriving by flight or by ferry, you’ll be able to take the shuttle to get to the “city” or main town area of Lanai City. (Which is hardly a “city” in real terms!)

You can walk around the quiet streets of Lanai, and you can also get dropped off at the Four Seasons Koele to start the Koloiki Ridge Trail for a hike with great ocean views.

If you’re staying in Lanai City and looking to take the ferry from Lanai to Maui, you can expect designated shuttle timings from Lanai City to Manele Harbor based on the Maui ferry departure timings. 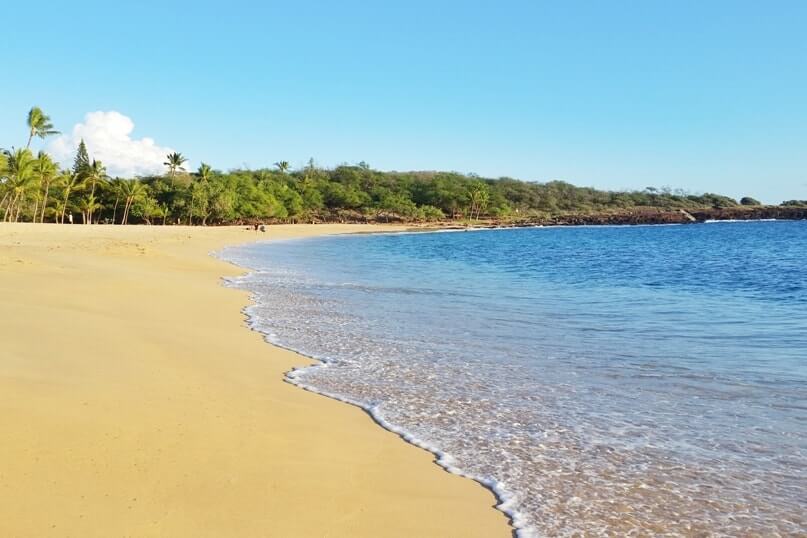 If you’re staying in the main town area of Lanai City, you can also get a ride to the main beach of Lanai. If you’re on Lanai for a day trip from Maui by ferry, you can just walk to the beach from the harbor. It’s about a 10 minute walk.

It’s also a Maui County marine life conservation district which also makes it a snorkeling spot, and you can take a trail that starts on either side of the bay that will give you great coastal views.

Off to the left as you’re facing the ocean is the trail to the famous sweetheart rock. Off to the right is the Fisherman’s Trail. 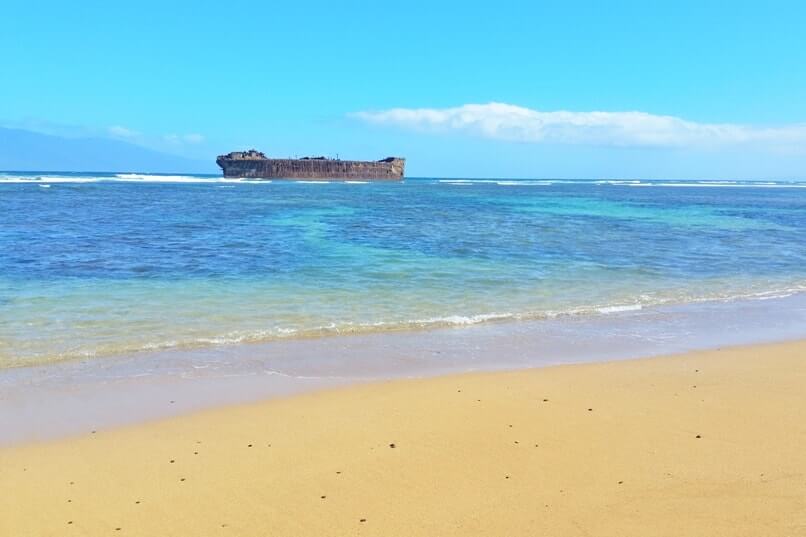 Even with a ride, getting to Shipwreck Beach will require a bit of a walk since the shuttle will only take you to the end of the paved road.

You can consider it a hike on Lanai!

Getting a ride to the end of the paved road means that you still will have like 2 miles to walk to get to the end of the dirt road where you’ll get a better view of the iconic Lanai “shipwreck.” And then from there, you can basically continue to walk along the secluded beach as long as you want before heading back!

And those are probably the main spots to go by shuttle on Lanai!

See the best of Lanai!

HAPPY GETTING AROUND LANAI BY SHUTTLE! 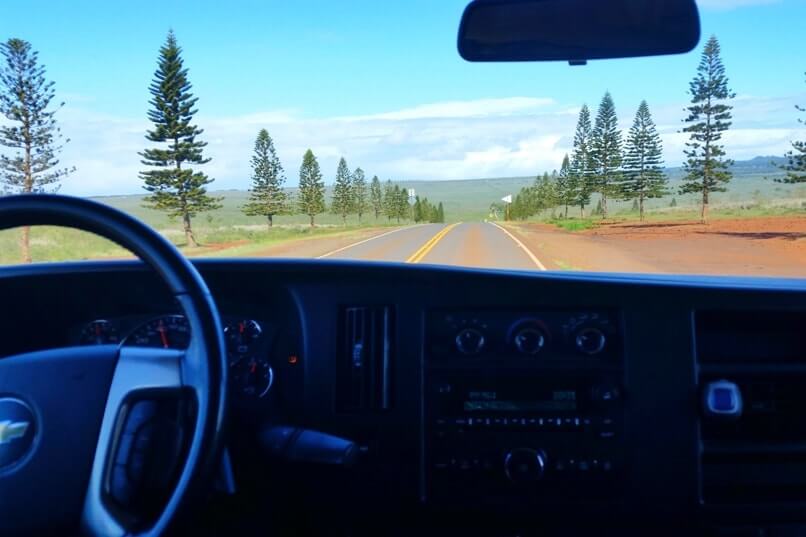