So basically THE purpose in visiting Craters of the Moon National Monument is to see the aftermath of volcano activity!

And there is plenty of that to be seen without even trying by simply driving through Craters of the Moon.

You can see “fields” of old lava flows (aka lava fields!) all around by doing the main scenic drive in the park!

And if you want to take your Idaho volcano experience even further… you can also walk through an Idaho cave that was formed by volcano activity!

At Craters of the Moon National Monument in Idaho, you will find caves that are called lava tubes.

These are basically caves that used to have lava flowing through them. And so, they are tubes of lava aka lava tubes!

They formed as a result of the underground lava flows.

What you will see now is a hallow “tube” (cave) where the lava flowed through.

The caves are actually lava tubes where hot streams of lava drained away and portions of ceilings collapsed.

The Craters of the Moon landscape is more than just surface volcanic features.

Below ground there is a dynamic underworld where fiery rivers in hardened, self-insulating tubes once flowed for miles without losing heat.

You do need a Craters of the Moon cave permit, though! A little bit about this in a bit.

More below about cave hiking in Craters of the Moon! 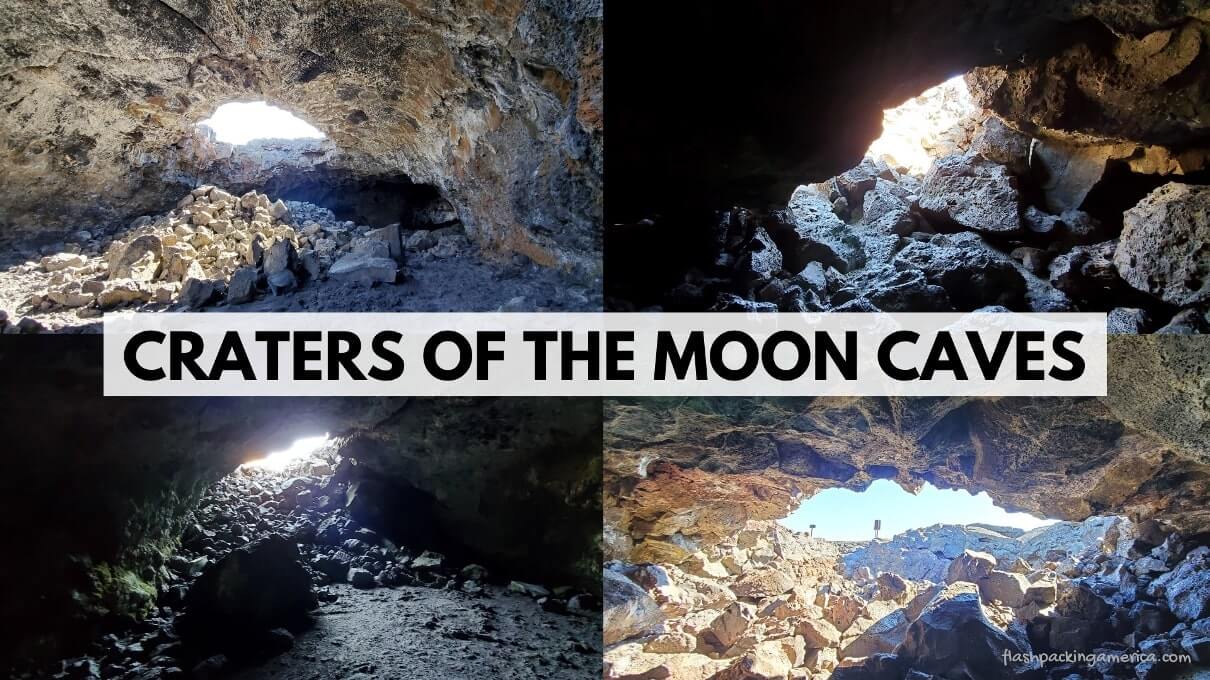 In order of priority when you only have a limited time in Craters of the Moon!

How much time you spend in each of the Craters of the Moon caves will vary! But just to give you an idea, I listed the time I spent inside each of the caves. This time does not include the walking to get to each cave or the walk back.

I spent around 30 minutes going through the Indian Tunnel.

I spent around 30 minutes inside Boy Scout Cave.

I spent around 15 minutes inside Beauty Cave.

I spent around 10 minutes inside Dewdrop Cave.

Caves Trail to get to Craters of the Moon caves

All of the above caves can be accessed directly along the Caves Trail.

This will be a walk where you will find the cave openings in the middle of a lava field in Idaho!

The Caves Trail itself is 1.6 miles round trip and is pretty flat. So if you want to go to all of the caves along the Caves Trail, then in addition to time inside each of the cave, you’ll add on the time it will take you to hike the 1.6 miles.

Even if you decide that you’d rather not go into a cave, the Caves Trail is worthy as an above-the-ground activity as you can take a walk with lava fields of old lava flows all around you.

There are picnic tables at the Caves Trail parking lot!

WATCH: Share the Craters of the Moon cave video with the people you’ll be traveling to Idaho with!

I went to Craters of the Moon in October 2021, and I’m not sure if the Buffalo Cave being closed was a seasonal thing, or a longer term thing. It was noted as being closed to provide complete darkness for the bats.

Even if the Buffalo Cave is closed and you can’t go inside the cave, it can still be worthy to hike to the Buffalo Cave. You will hike the Broken Top Trail and along the way you’ll see great views displaying the aftermath of volcanic activity!

Take care when cave hiking in Craters of the Moon!

Know that any cave in Craters of the Moon that you walk into is considered to be a wild cave!

This means that there are dangers associated with going into a Craters of the Moon cave.

But still, it’s nature, and things can happen unexpectedly. So, take care!

👆 Craters of the Moon caves are wild caves. Beware of the hazards. This includes unstable footing, falling rocks, low ceilings, and dark areas.

It is just a matter of stopping by the visitor center to get one after answering a few questions. Or, you can get one when at the Craters of the Moon park entry booth.

The purpose in requiring a cave permit is basically to quickly educate you about bats… and so you can help save the bats from disease.

There is a disease that has killed millions of bats.

This disease is thought to be spread by humans who bring in the disease after visiting different caves.

Bats are considered to be an important part of the ecosystem so it is said to be important to care about their well-being… and to try to prevent the death of bats by the millions.

Likewise, after you have gone into a Craters of the Moon cave, you’re asked not to wear anything that you wore then into another cave anywhere in the world.

Take a full-body picture of yourself in front of a Craters of the Moon cave!

Cost to hike the Craters of the Moon caves

👆 Craters of the Moon national park entry fee in 2021.

If you have an annual national park pass, then your entry into Craters of the Moon National Monument is FREE since that pass will be accepted.

What to pack for Craters of the Moon caves

The #1 thing you need to bring for a trip to the Craters of the Moon caves is a strong flashlight or headlamp.

Once you get away from the cave opening where there’s natural light, the cave is dark!

You will be walking into the darkness of the cave.

When going into any of the Craters of the Moon caves, you are the only one providing the lighting.

Don’t rely on your cell phone light, although that is nice to have as a backup in case the batteries go out on your flashlight!

The Indian Tunnel is listed as not needing your own lighting, but even for this cave it can be helpful.

While you’ll never be in true darkness in the Indian Tunnel, there are darker areas of the tunnel where a light can be nice to shine a light on your footing. There is uneven terrain through the cave tunnel. A light will be especially helpful if you’re going at a time when it’s cloudy out or when the sun isn’t as high (like late afternoon or evening) when it can seem darker in the cave tunnel.

But if you plan on walking through any of the other tunnels, you NEED to bring your own lighting!

It will be pitch black without it, and you won’t get very far!

Without a light, it is still possible to climb down into the cave and stay at the cave entrance only. That can be worth it too, without going further into the darkness. Although again, the light can be helpful to shine a light on the dark areas of your footing.

And so, if you plan on going into ANY part of a cave, put a flashlight or headlamp on your list of what to pack for Craters of the Moon!

The easiest place to find a headlamp when you’re on the road might be at Walmart. They will probably have them there. Look in the camping section! Buy a flashlight or headlamp with the higher “lumens”! This way you will have a brighter light.

It is best for everyone to have their own individual light source, and not rely on just one flashlight or headlamp for the whole group. This way everyone can be sure that they can see directly in front of them to know what kind of surface they are stepping on. (And to not trip over rocks or something.)

Long pants can be a good idea for added layers to protect your skin in case you slip and fall onto the rocky surface.

You might want to wear a long sleeve shirt or a light jacket since the cave can be on the cooler side compared to the daytime outside temperature if you’re going in summer or fall.

If you want to be extra careful, you can bring a hard hat or helmet too!

And that’s a bit about where to see lava tubes in Idaho!

See more about each of the lava tubes in Craters of the Moon:

Plan more of your trip to Idaho and Wyoming:

For more volcano exploration in the U.S. also see:

HAPPY CAVE HIKING IN IDAHO AT CRATERS OF THE MOON! 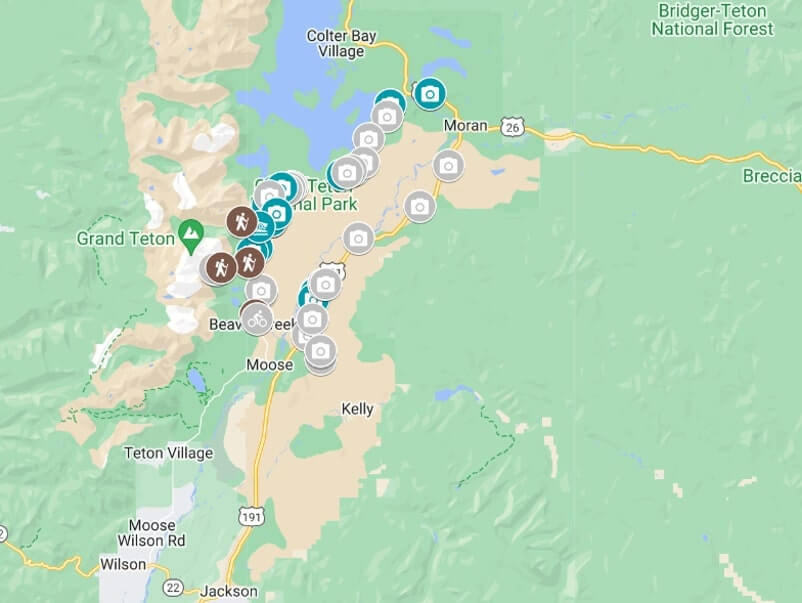