Hulopoe Bay tide pools in Lanai: 2 ways to get to the tide pools from Hulopoe Beach 🌴 Hawaii travel blog

So if you want to see tide pools during your stay on Lanai, then there are some pretty easy to access tide pools that you can get to!

Hulopoe Beach is the main beach on Lanai, and it’s from here that you can walk to the tide pools.

The location of these tide pools generally makes this a calm area. Still, it could be better to keep anything you want to stay dry up above the stairs, just in case a rogue wave comes through and washes up further than you expect!

Also, water shoes can be helpful when you go to the tide pools! Walking across lava rocks barefoot can be rough on the feet. Water shoes can be among the everyday essentials when you’re out and about in Hawaii!

How did these Lanai tide pools come to be?

According to the people of Lanai, the lava rock of this area was carved out to create a safe(r) ocean pool for kids! As described by the informational sign near the Hulopoe Bay tide pools:

At the base of the steps is a larger pool which was actually made in 1951 during the seven-month long pineapple strike.

During the strike, Hawaiian Pineapple Company employees engaged in a number of community service projects, one of which included the creation of the pond to serve as a safe place for children to swim.

The pond is referred to as “keiki pond” by island residents.

keiki = child. See more common Hawaiian words that you are likely to hear during a trip to Hawaii!

More below on how to get to the Hulopoe Bay tide pools on Lanai!

How to get to the Hulopoe Bay tide pools

There are basically 2 ways that you can get to the Hulopoe Bay tide pools.

No matter which way you take, you’ll be walking alongside Hulopoe Bay to get to these Lanai tide pools.

1. Start off by taking the Puu Pehe Trail and take the stairs down to the tide pools.

The Puupehe Trail is the trail to Sweetheart Rock.

2. Stay at sea level and walk from Hulopoe Beach across the lava rocks to get to the tide pools.

Either way you choose to get to these Lanai tide pools, you’ll start off on the left side of the Hulopoe Beach as you are facing the ocean. This is the eastern side of Hulopoe Bay, and it’s on the side that is NOT where Four Seasons Lanai is located. Instead, you will see the Four Season from the tide pools across the bay!

The side of the tide pools is also the side that’s considered to be the best snorkeling at Hulopoe Beach.

And then if you’re interested in some more coastal hiking on Lanai, you can continue onwards on the Puu Pehe Trail to first get to Uolokeahi Point, and then onwards to the Puu Pehe Overlook where you can see Lanai’s famous landmark of Sweetheart Rock!

And that’s a bit about making a visit to the famous tide pools in Lanai!

Explore the other side of Hulopoe Bay too with a coastal hike on the Fisherman’s Trail!

And more things to do in Lanai! 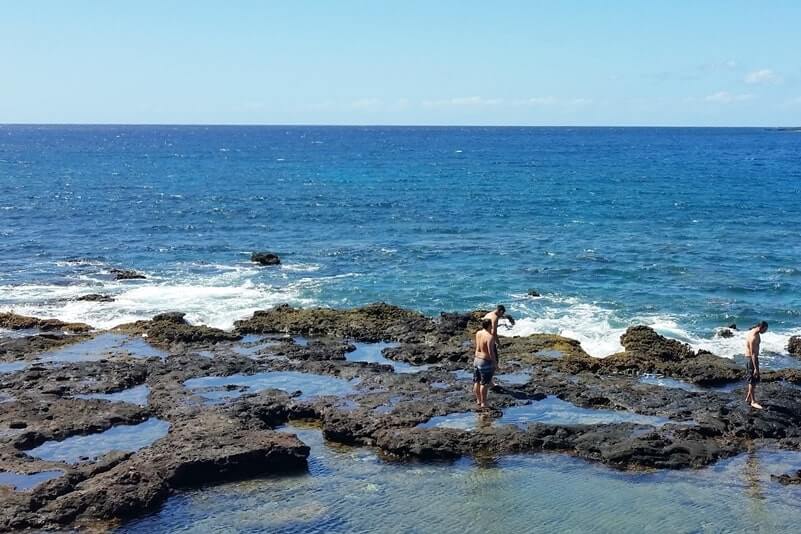