I thought the Historic Lantern Tour of Jewel Cave was FUN!

Although to be fair, Wind Cave didn’t offer all of their cave tours when I was there, including the one I originally wanted to do.

In any case, if you do the Jewel Cave lantern tour, it’s very likely it’ll leave a lasting impression on you!

Quite literally, you will be using a lantern to light your way through the cave!

The National Park Service calls this tour an “adventurous” tour. 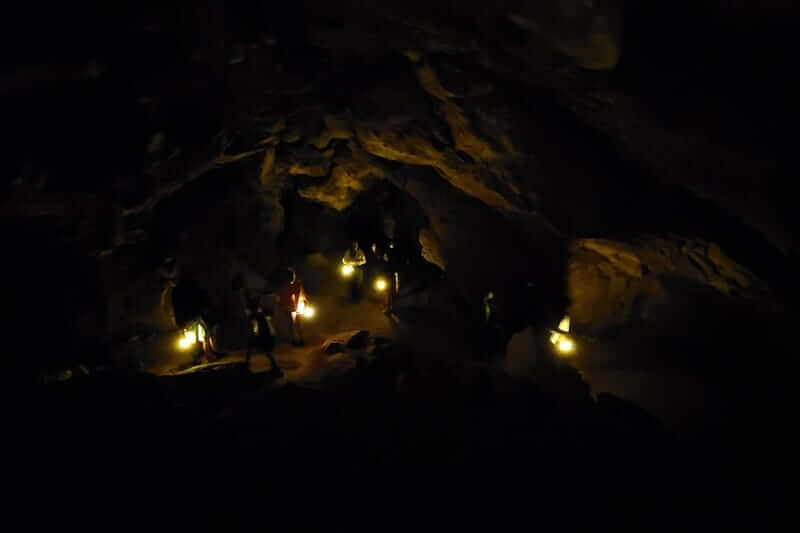 Share the Jewel Cave tour video with the people you’ll be traveling to South Dakota with!

It is called the “historic” tour so you can get a sense of what it may have been like in the past to explore a cave with your own lighting of a lantern.

Although for the purposes of the tour, you are using more reliable modern lanterns!

And since you’re in a group, you have a ton of lanterns. And you also have a guide to know exactly where to go.

But, you can still imagine what it was like to be to be one of the first explorers of Jewel Cave!

It seems to be a thing across national parks that elevators for cave tours get broken.

When I made a visit to Jewel Cave in August 2021, there was an elevator that was broken, and this meant that not all cave tours were offered.

Elsewhere, when I went to Wind Cave National Park, there was also an elevator broken that limited cave tours.

As for the Jewel Cave elevator, there were estimates that it would be fixed by mid-September 2021.

So hopefully that means in summer 2022 you will have all options for Jewel Cave tours! You can check the National Park Service website for updates. And it can be good to check in the days leading up to your Jewel Cave visit too, in case there are any other alerts to be aware of.

That said, even with the limited cave tours in Jewel Cave available, it was still possible to do the historic lantern tour, so I was happy about my Jewel Cave tour experience! (There were 2 cave tours offered, and I did both of them.)

How much does a Jewel Cave tour cost?

There is no official entry fee collection for Jewel Cave National Monument, but there are fees for the cave tours.

If you have an annual national park pass, then it won’t do you any good at Jewel Cave National Monument, as it gives you no discount on the cave tours.

The cost of a Jewel Cave tour will depend on which tour you decide on.

At the time I went, the only way to buy cave tour tickets was to show up at the Jewel Cave National Monument Visitor Center.

I guess previously some tickets have been available online, so be sure to check for that. Once again, you can go to the National Park Service website to find out current info. The phone number listed for the Jewel Cave National Monument Visitor Center is 605-673-8300. You might also try calling that number to speak with a park ranger for current info.

Cave tour tickets do get sold out. 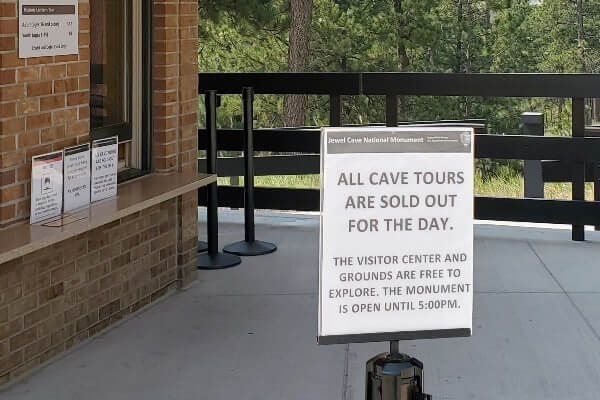 When I went, there were 2 historic lantern tours offered each day, at 10am and 1pm.

I arrived at 9:10am, and I bought the last ticket for the 10am historic lantern cave tour.

What to wear to Jewel Cave

In short, bring a layer or 2, and wear good shoes!

Even if it’s nearing 100F outside, it can be cooler in the cave. The National Park Service says the Jewel Cave temperature is around 49F. For this reason, you’ll want to bring some extra clothes for the tour.

Along with narrow steps, you’ll be walking on the natural cave floor which means that the ground isn’t always completely flat. For this reason, you’ll want to be sure you wear good shoes (not sandals) for your Jewel Cave tour.

For safety reasons: sturdy, low-heeled, rubber-soled shoes such as sneakers, tennis shoes, or hiking boots are required to take part in an Historic Lantern Tour.

Due to the uneven, rocky terrain of the cave, open-toed shoes and close-toed sandals (including Crocs, Teva footwear, and KEEN hiking sandals) are prohibited.

Also, for the health of the bats, you are asked not to wear shoes you have worn in other caves. And you are also asked to not wear the shoes you wear in Jewel Cave in any other caves of the future. It is said that your shoes may be carrying disease harmful to bats that can be tracked into other caves. If you are going to both Jewel Cave and Wind Cave, consider bringing 2 pairs of shoes with you to South Dakota.

It’s also best to bring as little as possible to the cave tour. (So don’t bring a backpack for example.)

Be sure to read the full description of the Jewel Cave tour to make sure you know what you’re getting into, and so you can be properly prepared for it.

More below about what a historic lantern cave tour is like at Jewel Cave National Monument!


I have a lot of 30-90 second South Dakota outdoor travel videos. A few of them might be on this page. If you can't see the video directly above, it might be because you have an ad blocker. Save the South Dakota video playlist to watch on youtube later!

Here is what part of your day at Jewel Cave National Monument can be like!

This is based on my experience of visiting Jewel Cave National Monument in summer 2021. Your experience may vary!

So your first stop in Jewel Cave National Monument will be to buy tickets for the cave tour! You’ll follow signs to the visitor center. Once you get to the parking lot, you’ll see a ticket stand where you can go and buy your Jewel Cave tour tickets.

Once you buy your tickets, the park ranger will give you some information that will include where to go for your cave tour meeting spot. You’ll be told to get there 15 minutes before the cave tour starts.

2. Drive to the Historic Area of Jewel Cave National Monument.

If you have extra time before your tour, you can go to the visitor center to learn a little bit about the area of Jewel Cave.

Otherwise, you can head straight for the meeting spot of the historic lantern cave tour. It is a couple minutes away by car.

3. Walk to the cabin

The meeting spot will be at the cabin, and then basically you will wait for the park ranger to arrive.

4. The tour starts with a walk through of the cabin.

My Jewel Cave tour started around 10am.

Once the park ranger arrives and the tour gets started, you’ll start learning some things.

Then you’ll go inside the cabin where it’s set up to get a glimpse into the past.

Inside the cabin is also where you’ll get a lantern.

5. You will walk along the Canyons Trail to get to the natural cave entrance.

Then once you have your lantern, you’ll take a short walk of a couple of minutes to get to the cave entrance.

Once you get to the cave entrance, you’ll feel a nice breeze of cool air!

As you are walking along the Canyons Trail, first you’ll come across a smaller hole, and then you’ll keep walking to get to the walk-in cave entrance.

The cave entrance is gated and locked. It also gets locked while you are inside the cave.

Final words before actually walking deeper into the cave! Including the contingency plan of what to do if the park ranger goes unconscious so we are not trapped inside a locked cave. 😜

Our group entered the cave around 10:20am.

7. Start walking in Jewel Cave by the light of a lantern only!

Now, I know these pictures inside of Jewel Cave are not great.

But I think you will see that there are a lot of narrow spaces, some small steps up and down ladders, some crouching… and most of all, it is indeed DARK inside the cave!

The “destination” inside the cave is a wide open space (well, compared to walk you walk through!) and you’ll be given some time there. And then you will walk back the same way you came. 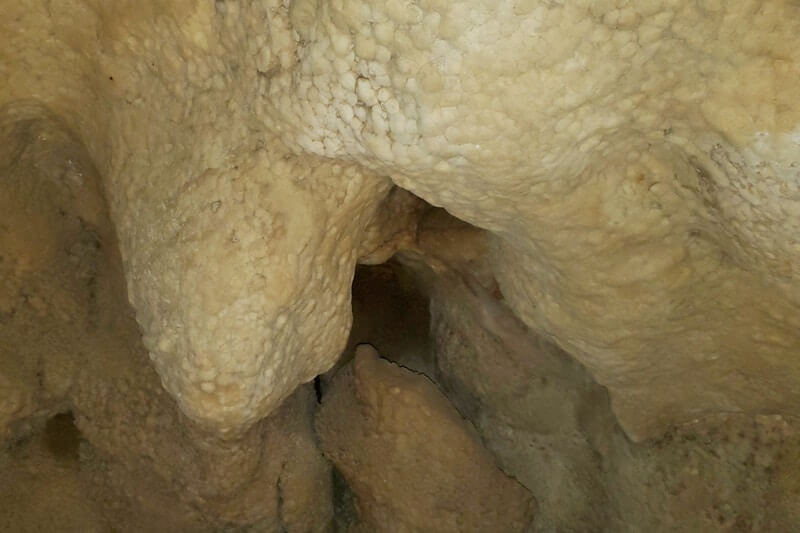 Watch the video of walking inside Jewel Cave

If you missed the video above of being inside Jewel Cave, then take a look at the Jewel Cave tour video on youtube.

8. You can see daylight again!

Right before you leave the cave, you’ll be asked to step on a mat to “decontaminate” your shoes. (For the health of the bats.)

Our tour group came out of the cave at a little past 11:30am. So actual time inside of Jewel Cave was a little over an hour.

9. You can feel the hot temperatures warmth again!

Once you walk out of Jewel Cave, you are free to go back to your car! (After you give the lantern back near the cabin.)

And that’s a bit about one Jewel Cave tour that you can do!

Explore more national park sites in South Dakota, and beyond:

HAPPY WALKING INSIDE IN JEWEL CAVE! 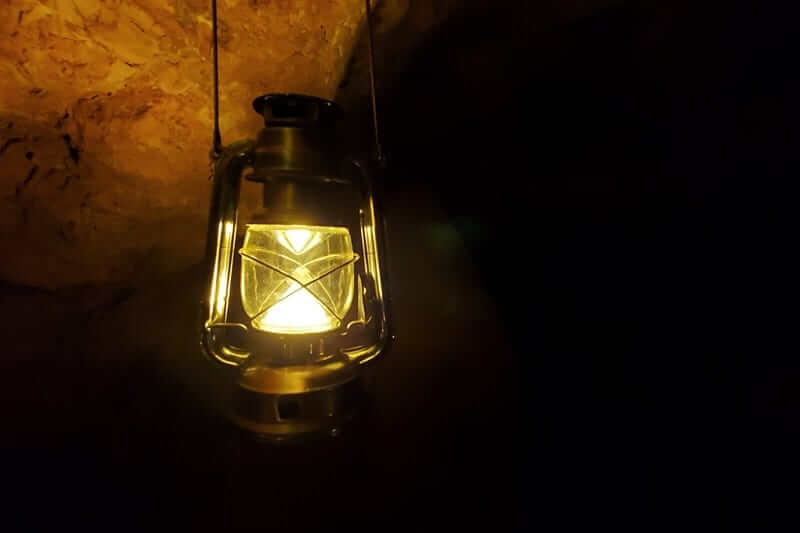 Watch the videos to see South Dakota in action!

Plan more of your trip to South Dakota and beyond