So you want to go snorkeling in Key West!

Can you snorkel at Higgs Beach?

Higgs Beach is one of the Key West snorkeling beaches.

Yes, you can go snorkeling at Higgs Beach!

You have a chance to see lots of fish while snorkeling from Higgs Beach on your own. No Key West snorkeling tour necessary! 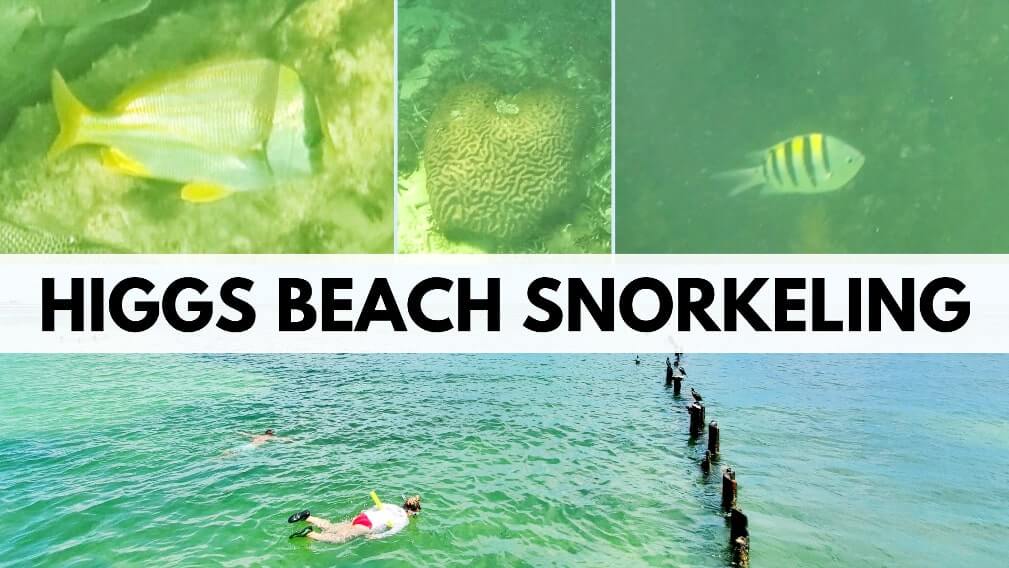 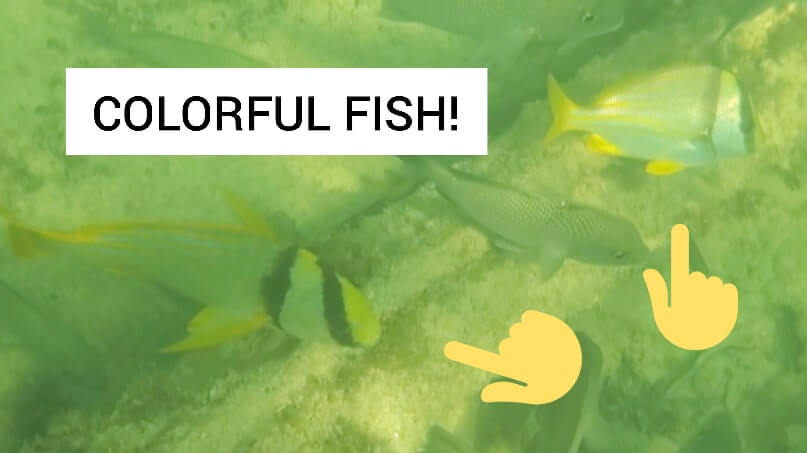 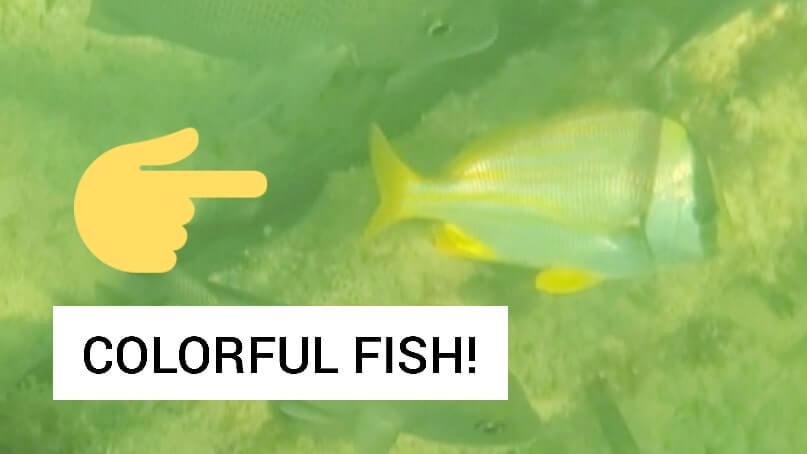 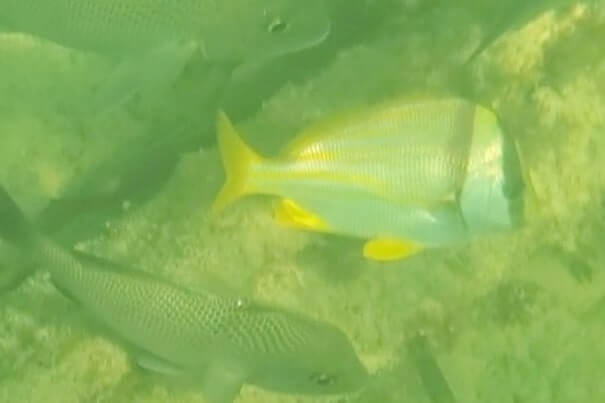 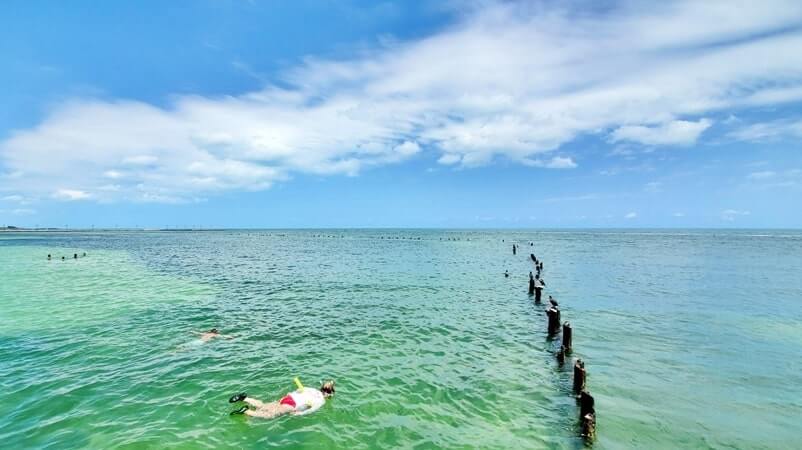 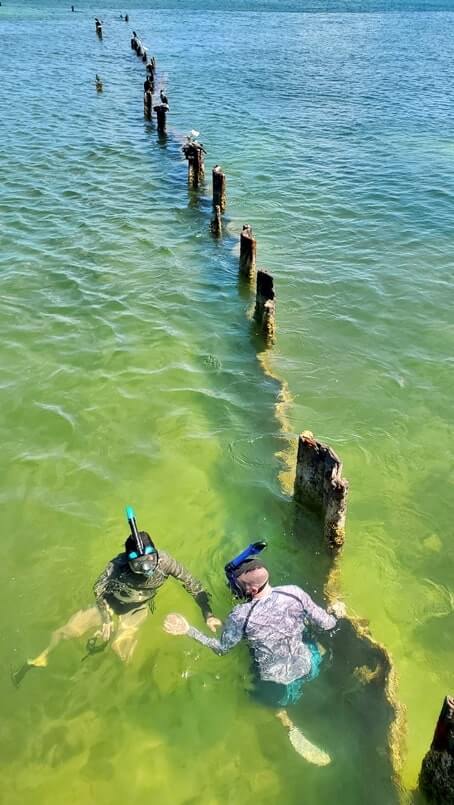 And, emphasis on CHANCE…!

The marine life is wild so they do what they want when they want and there’s no guarantee to see them!

The Florida Keys are not generally known for having good snorkeling from shore.

But Higgs Beach is part of the Key West Marine Park, and you do have a good chance to see lots of fish… if you go snorkeling in the right spot!

But snorkeling at Higgs Beach can be a fun Florida Keys shore snorkeling experience in Key West!

And on land… You might also see Key West chickens when you go to Higgs Beach!

Where is the best shore snorkeling in Key West from Higgs Beach?

So now, where can you go swimming for the best chance to have good snorkeling at Higgs Beach?!

In short, for the best chance of having a fun Key West shore snorkeling experience from Higgs Beach, be sure to go swimming around the ruins of the old pier!

You will know when you see it!

I did have a fun Key West snorkeling experience at Higgs Beach by swimming almost the entirety of the old pier. 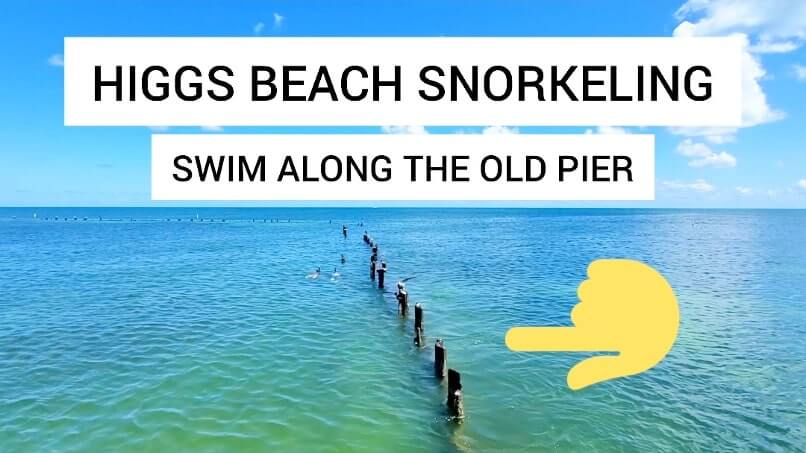 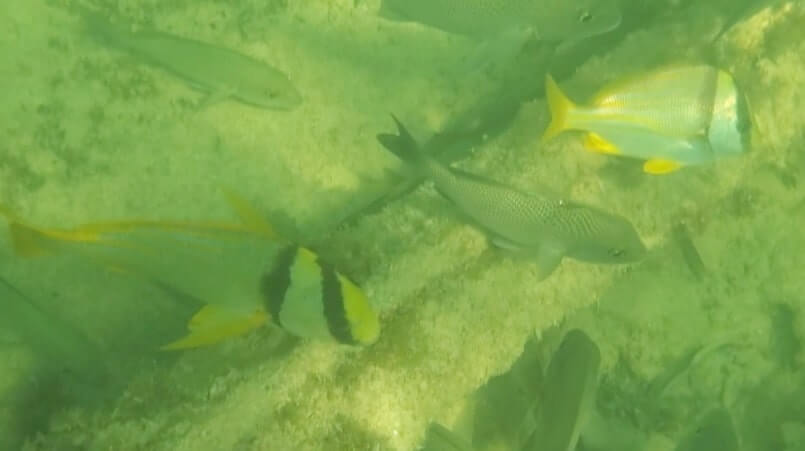 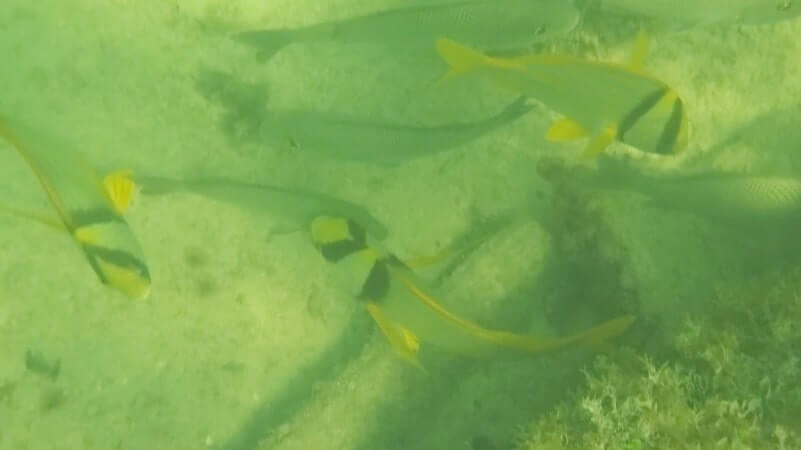 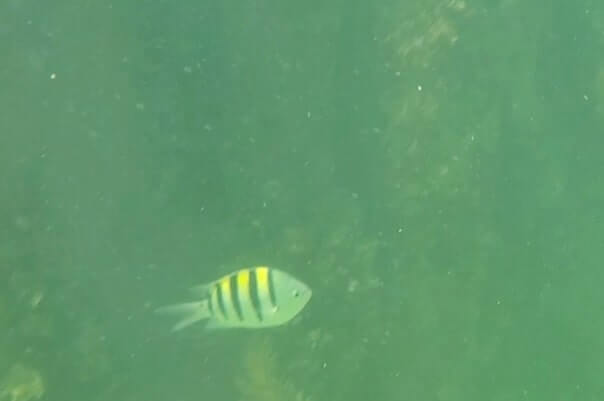 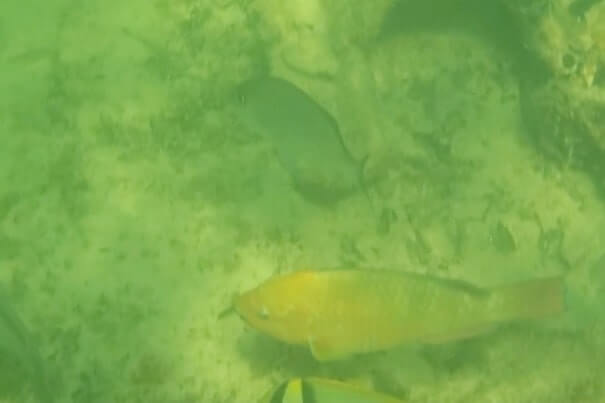 Higgs Beach is part of the Higgs Memorial Beach Park.

There are basically 2 sides of beach.

As you’re facing the ocean, off to the far left is the Key West African Cemetery side, and this is the quieter side of the Higgs Beach Park.

The main beach area of Higgs Beach is off to the far right side. 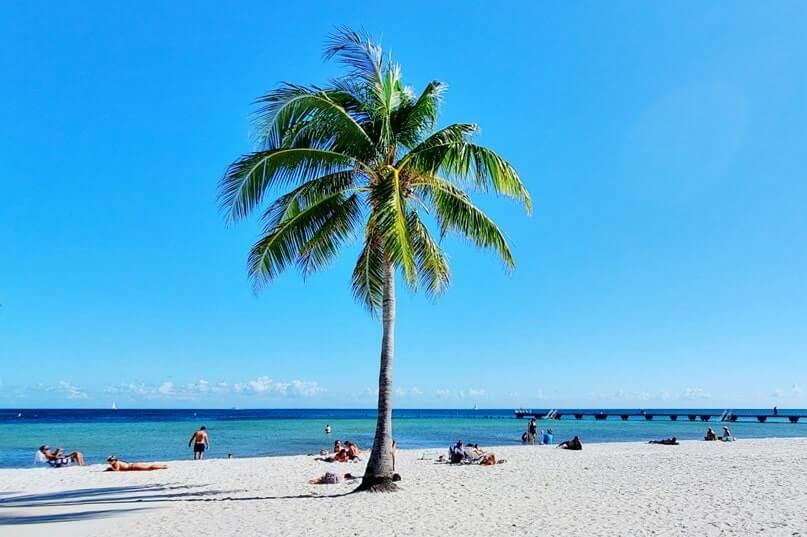 You can enter the water directly from the beach but it will be a long swim out to the main Higgs Beach snorkeling spot. 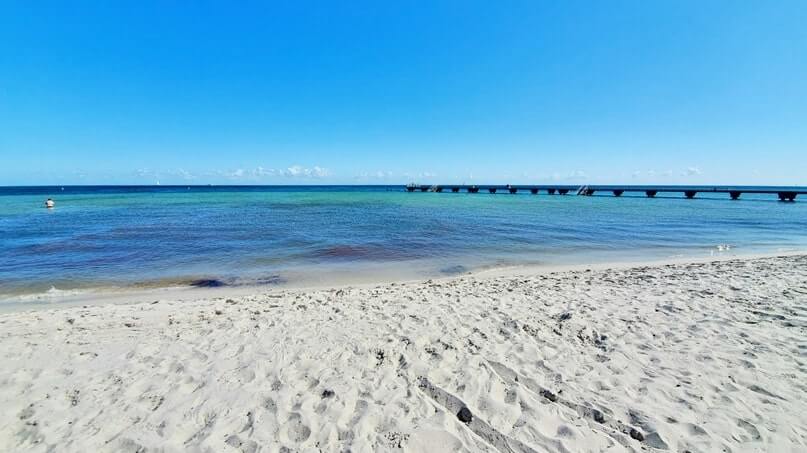 If you want to minimize the amount of swimming you need to do to get to the snorkeling spot, then you want to go to the Higgs Beach pier. 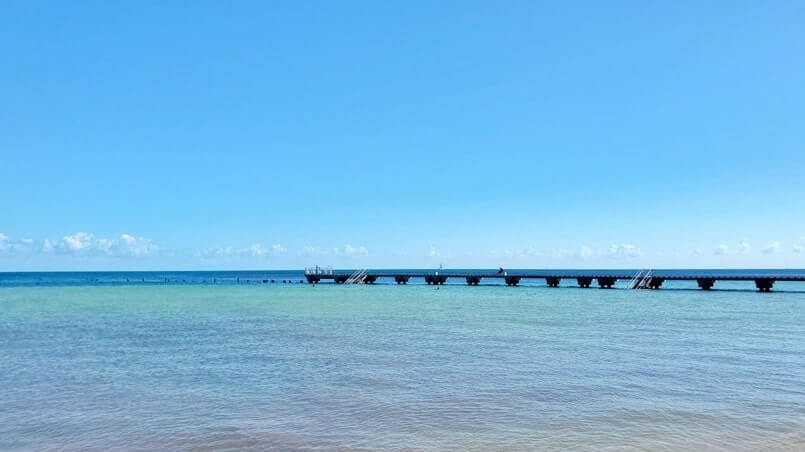 You want to walk to the very end of the Higgs Beach pier to start snorkeling.

Along the pier, you will find stairs that go down into the water. 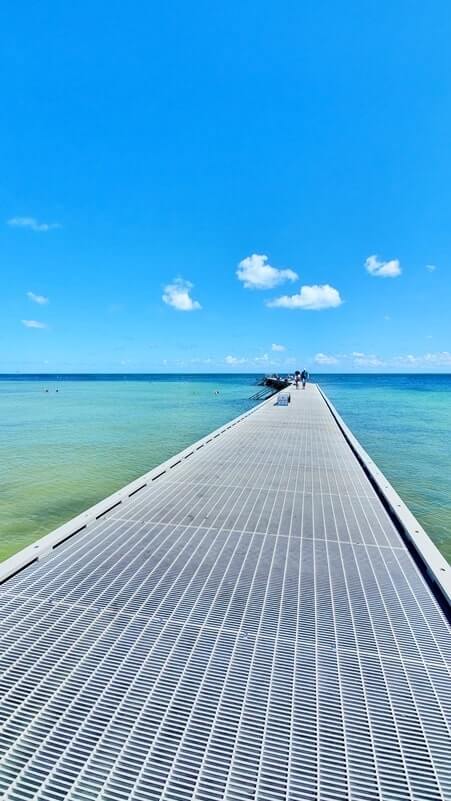 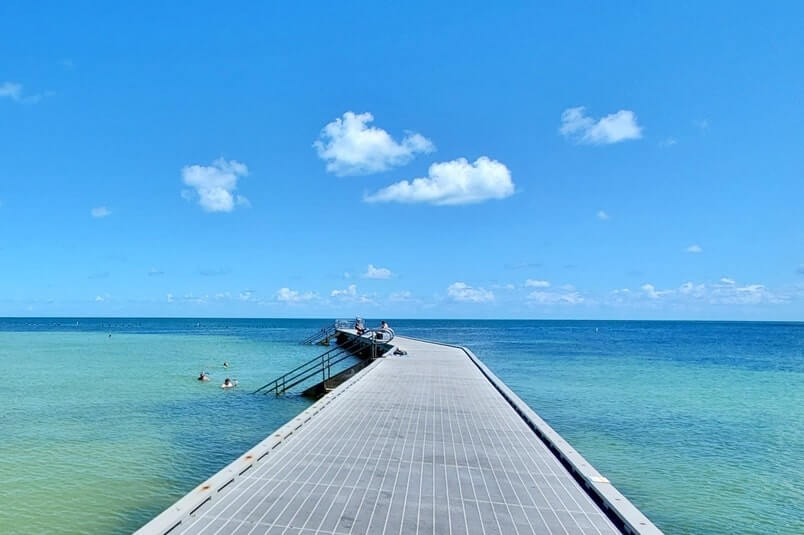 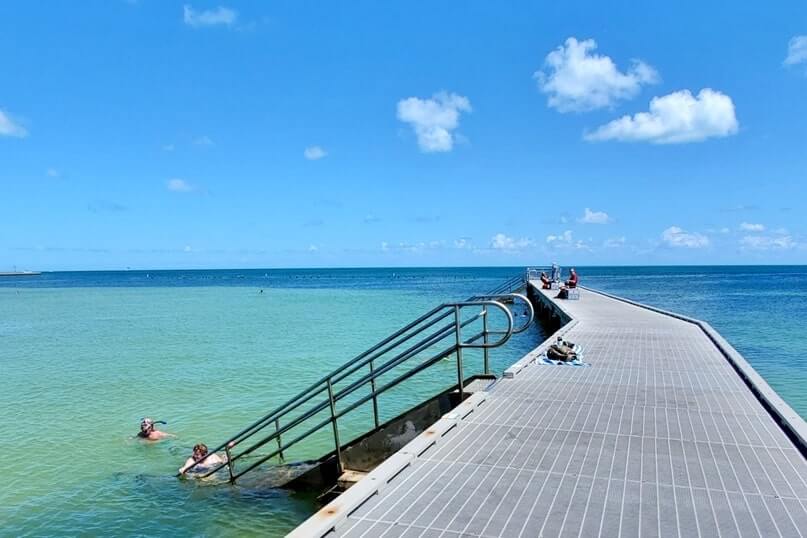 So when you are ready to get in the water, just get in and start swimming along the old pier ruins! 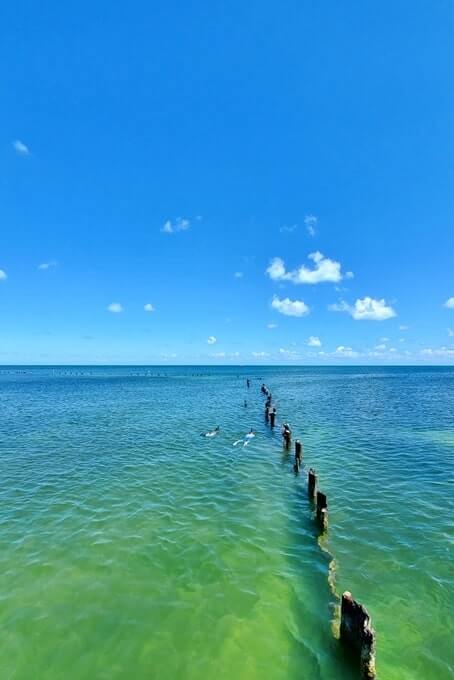 Not only were the fixed structures (aka the old pier ruins) where I saw the most fish at Higgs Beach, fixed structures seem to be a good spot to try no matter where you are snorkeling from shore in the Florida Keys!

In most other situations, this usually meant looking for rocks underwater.

It was around rocks that I found good snorkeling at Fort Zachary Taylor State Park for another Key West snorkeling spot too.

Even at Smathers Beach, although this is not really known as a Key West snorkeling beach, I saw little fishies swimming around rocks from above without even getting into the water.

It was also around rocks that I found good snorkeling at Bahia Honda State Park.

More pictures below of what I saw snorkeling at Higgs Beach!

More photos/info below, but first...
Side note!
Here's some info on Florida Keys trip prep!


I have a lot of 30-90 second Florida outdoor travel videos. A few of them might be on this page. If you can't see the video directly below, it might be because you have an ad blocker. Save the Florida Keys video playlist to watch on youtube later!
There are affiliate links on this page.

More for your time in the Florida Keys and beyond:

What can you see snorkeling from shore in Key West at Higgs Beach?

See the pictures below!

In short, when you go snorkeling at Higgs Beach, you have the potential to see lots of fish!

I also saw what I now know to be brain coral. I saw this on the “outer” side of the pier, with the inner side being beach side.

My snorkeling trip to Higgs Beach and the Key West Marine Park was in May 2022. Your experience may vary!

There is free parking at Higgs Beach directly at the pier.

For snorkeling at Higgs Beach, this is the best spot for parking.

There is no Higgs Beach entry fee, so snorkeling at Higgs Beach can be one of the FREE things to do in Key West!

And then once you park, you can head towards the Higgs Beach pier! (There is a bathroom off to the left if you need that.)

My underwater pictures were taken with my phone.

I put my phone in a cheap waterproof phone case.

This does have its annoyances and you won’t be able to take as crisp of photos as a proper camera.

But if you don’t want to buy a real waterproof camera, then you might be happy with what it can do!

I have found that it’s easiest to take lots of video, and then if you want to make it into a picture, then take a screenshot from the video!

Most of the pictures above of snorkeling at Higgs Beach are screenshots from video taken with my phone. And these pictures are also formatted for the web aka the quality is reduced.

Whether you get a cheap waterproof phone case or a proper waterproof camera, also get a camera float to attach to it!

Then, if you accidentally drop your phone or camera, it won’t sink to the bottom of the ocean!

And that’s a bit about snorkeling from shore in Key West!

More snorkeling in the Florida Keys: 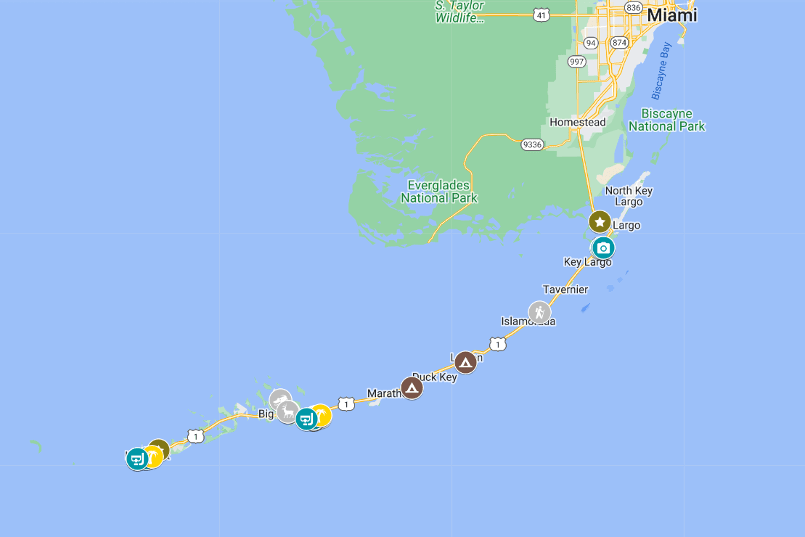 
Things to pack for your Florida vacation!

Wearing a swim shirt means less skin that's exposed to the sun which means less sunscreen you need to apply! See about wearing swim shirts with UV protection like these when you're swimming.

Watch the videos to see Florida in action!

Find more amazing things to do Florida: Watch my Florida videos on youtube