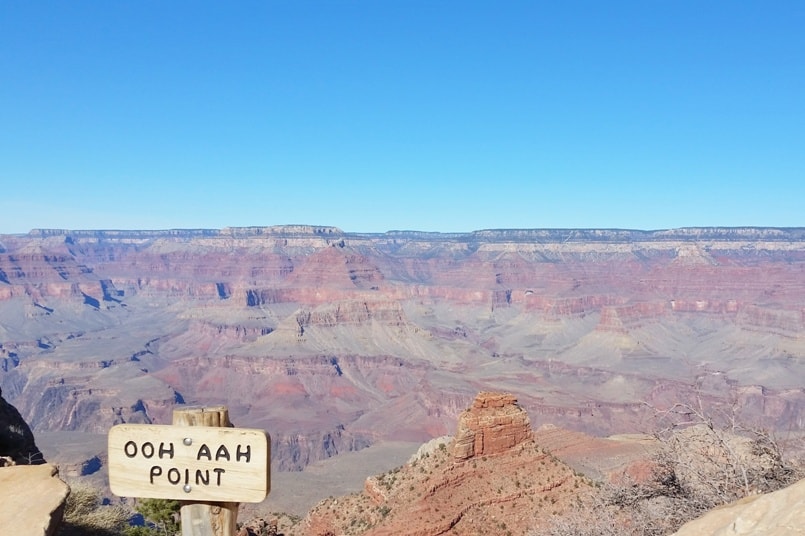 This is an overlook that you need to hike to get to.

If you don’t want to hike, you can get grand Grand Canyon views without hiking at all by visiting the scenic viewpoints that can be found along the Rim Trail such as Mather Point and Yavapai Point.

But if you want to get in a hiking experience in the Grand Canyon that isn’t too incredibly strenuous, then you might consider hiking the South Kaibab Trail to Ooh Aah Point!

There are a few different scenic viewpoint points on the South Kaibab Trail which also mark the common turnaround points.

Ooh Aah Point is the first marked viewpoint you’ll come across, so it’s a popular viewpoint to turn around at.

Although the hike to Ooh Aah Point is considered a shorter hike in the Grand Canyon, you’ll still want to be prepared for it.

This can include making sure you’re carrying water and snacks, wearing shoes with some level of traction (like trail running shoes or hiking shoes), and hiking poles can be a good idea too in order to save your knees from the constant steep downhill.

You also want to be prepared for stair climbing, basically.

For the hike to Ooh Aah Point, you’ll be starting from the top and hiking into the canyon. This means that while the way down may feel easy since it’s all downhill, you’ll also need to hike back up.

There are some steep parts!

About the trail to Ooh Aah Point

Allow 1-2 hours for the entire hike

A 2 mile hike may not sound like a lot, and it is rated as a moderate level trail, but it can start to feel strenuous when you add in how steep the trail is.

Also… no matter where you are in the Grand Canyon, BE CAREFUL!

To be dramatic, people have died in the Grand Canyon from falling off a cliff.

Not all cliffs have safety railings, and one wrong step can be very dangerous. There are no railings at the Ooh Aah viewpoint. Or I don’t think anywhere on the South Kaibab Trail has railings for that matter.

And there has been a death specifically at Ooh Aah Point.

A tourist from Florida fell to her death in the Grand Canyon when she apparently tripped over her feet while getting a picture standing on a rock at Ooh Aah Point. She was apparently trying to move over a little for another person. Here’s the news story.

Some Grand Canyon views you’ll get with a hike to Ooh Aah Point!

I did this South Kaibab hike in December 2019.

How to get to Ooh Aah Point

You can’t drive directly to Ooh Aah Point so that’s why hiking is the way to get there.

You’re not supposed to park at the South Kaibab trailhead which means you need to take a shuttle to get there, even in winter. (There are some areas of the Grand Canyon that become accessible by car instead of shuttle in the winter season, but the South Kaibab Trail isn’t one of them.)

You can take the free Grand Canyon shuttle to the trailhead that generally runs every 15 minutes. You can park at the Grand Canyon Visitor’s Center.

So once you’ve arrived at the trailhead…

Start the hike at the South Kaibab trailhead! 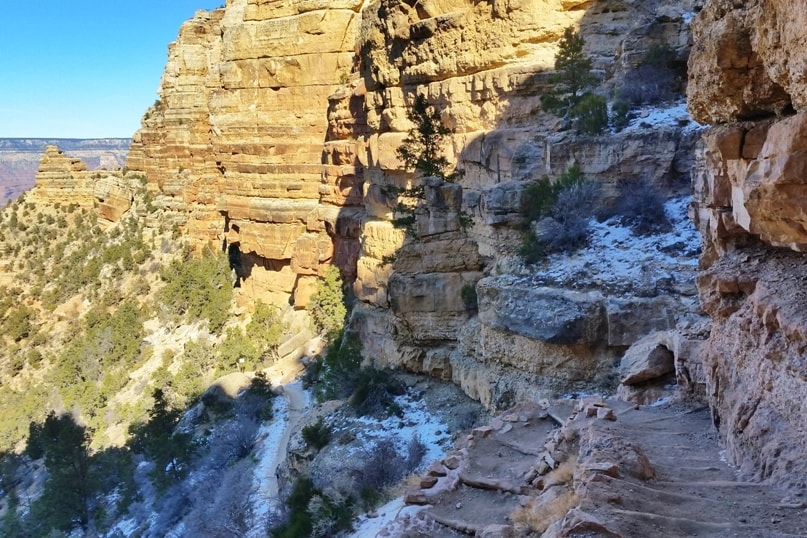 And then making it to the Ooh Aah scenic viewpoint! 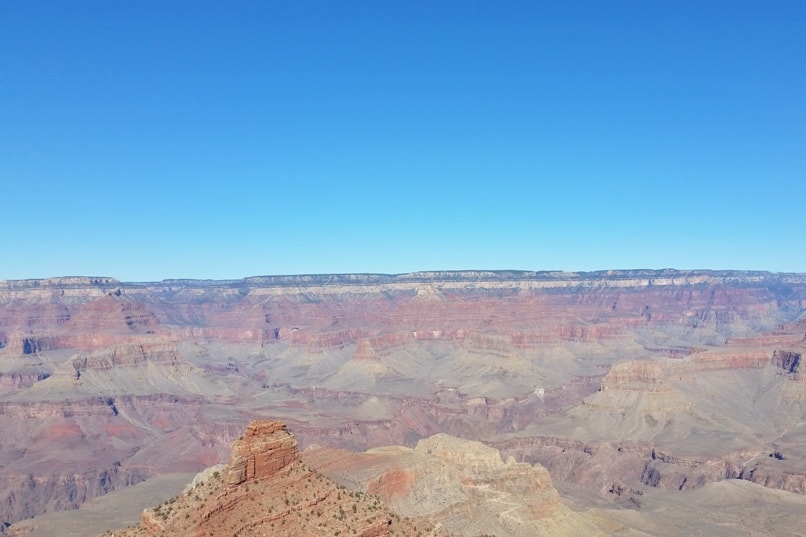 Sunrise at the Grand Canyon is also a thing, and you can also time it to make it to Ooh Aah Point for sunrise too.

If the lighting is right, you can see some really orange and pink colors over the Grand Canyon. 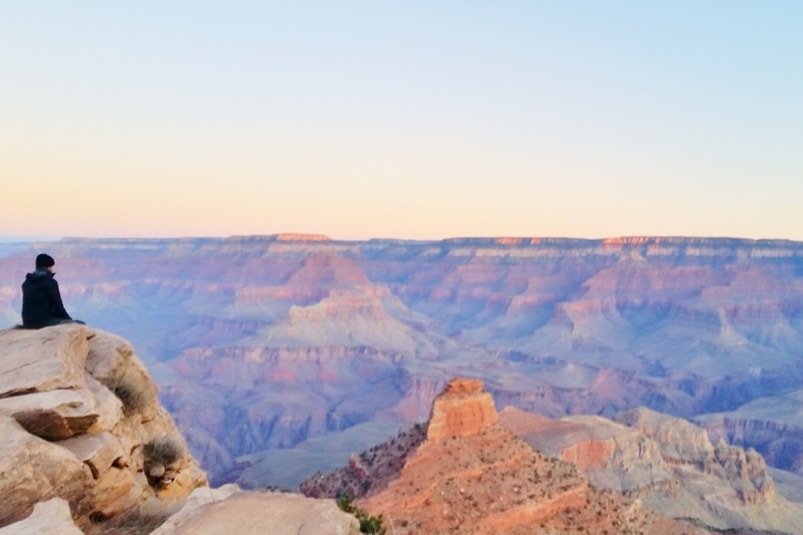 And that’s a bit of what you’ll see hiking to Ooh Aah Point on the South Rim of the Grand Canyon!

So after you’ve made it to Ooh Aah Point, should you keep going on the South Kaibab Trail, or should you head back up?!

Well, if you keep going…

Just a little bit further is the Cedar Ridge viewpoint. This spot can offer up even more expansive views of the Grand Canyon than Ooh Aah Point.

If you do make it to Cedar Ridge, there’s an area that juts out a little bit, off to the left when you’re coming from the top of the canyon. Be sure to walk around that area for the best views at Cedar Ridge!

The other common point on the South Kaibab Trail to go to as a day hike is to Skeleton Point. Officially, it’s recommended to go no further than Skeleton Point when doing a day hike in the Grand Canyon, especially in summer.

That said, there are people who go further, to the Colorado River and back as a day hike.

Another thing that’s done that’s the most strenuous of them all as a one day hike is going down the South Kaibab Trail to the river and then back up the Bright Angel Trail. Depending on your fitness level and how many breaks you take at the various viewpoints, it can generally take anywhere from 6 hours to 10+ hours. Aside from the drastic elevation change (which means tons of uphill on the way back when you’re already tired making it feel extra strenuous), this is especially not recommended in the summer because temperatures in the canyon can reach 100F+.

If you’re interested in any of these options of hiking past Ooh Aah Point, have a look here for more photos of the South Kaibab Trail!

Even if you’re going “only” to Ooh Aah Point, make sure to bring along water and snacks in your daypack, no matter the season – winter, spring, summer, or fall! 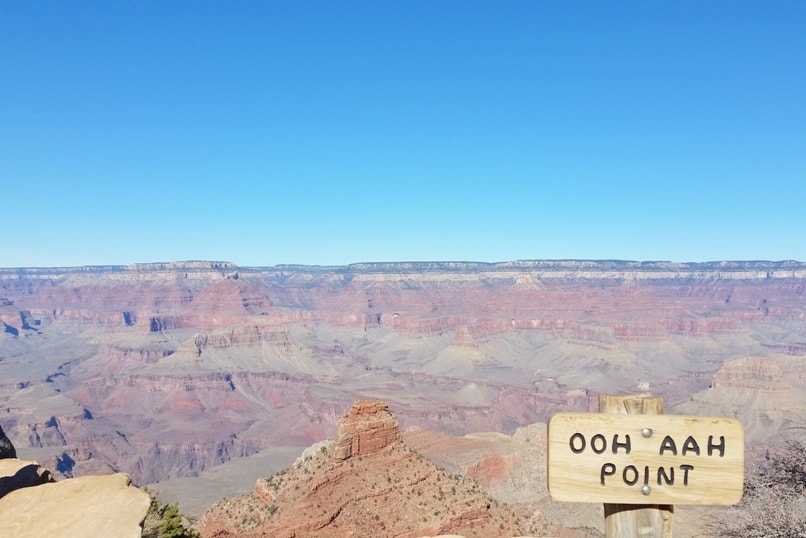 
Have a look at some Grand Canyon experiences you are sure to remember!

These are some epic Grand Canyon tours: